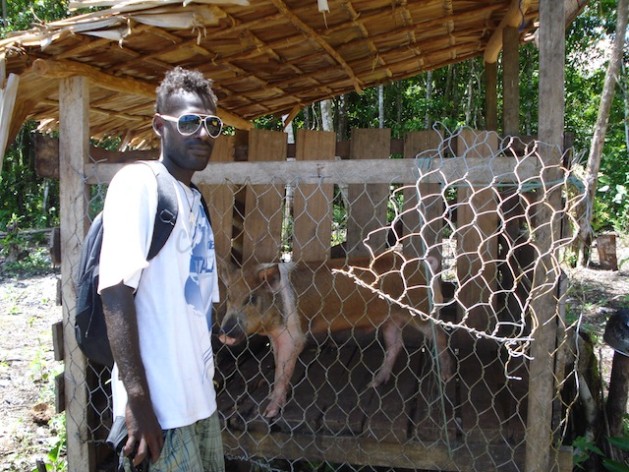 MUNDA, Solomon Islands, Apr 10 2013 (IPS) - With little more than a bush knife and an axe between them, a group of young boys between the ages of nine and 18 years have taken food security into their own hands. In Kindu, a community of 5,000 people in the coastal urban area of Munda in the Solomon Islands, these boys, who have been abandoned by their parents, have transformed their lives by establishing a cooperatively run farm.

They now have the largest urban agricultural enterprise in the Munda area on New Georgia Island, Western Province, which is providing them a sustainable livelihood and boosting wider food and nutritional security.

Youth unemployment stands at 45 percent in the Solomon Islands, a developing South Pacific island state east of Papua New Guinea. Securing an occupation and nutrition here is not easy, but with a vision and wisdom beyond his years, 23-year-old Patrick Arathe has managed to do just that.

Arathe’s parents abandoned him when he was just nine years old, and he was sent to live with extended family members, as is the custom here. After completing secondary school, he became deeply concerned about the many children in the area in a similar situation.

With no one to fully support their needs, they suffered from poor nutrition and a lack of clothing, emotional support and guidance. Few could afford to attend school.

“I saw the kids and I knew they were the same as me, fatherless,” Arathe told IPS. Strongly convinced that “kids are the future”, he was keen to find a way to support them, so in July 2012, he gathered a group of 16 youths and embarked on a small farming project.

“I thought that farming was the best idea because there are not enough vegetables at the market and there is a big need to grow more,” he explained.

Though some of the youths were initially sceptical about the project, their doubts have quickly been replaced by a genuine enthusiasm for agriculture, with some members aiming to become full-time farmers once they finish school.

As the group’s leader, Patrick ensures the boys have time to do their homework after school.  Then in the late afternoon, when the heat of the sun dissipates, they spread out over the farm to plant, weed, water and harvest some of the crops for the next day’s market.

But the going is not always smooth. “The soil is not very good here,” Arathe pointed out, adding that environmental and climate challenges often plague their cultivation efforts.

The Kastom Garden Association (KGA), a national NGO, is doing its part to help this youth initiative thrive. The NGO believes that rising sea levels caused by climate change coupled with years of “slash and burn” land clearing practices have degraded the soil and compromised food security in Munda.

The KGA, which prioritises smallholder farmers and focuses on enabling village communities to develop their own practical ways of achieving household food security, has helped Arathe and his group implement a composting system and create an organic pest spray, made from locally grown chillies.

According to Arathe, “The cabbages are now growing faster and bigger.”

“We have given the group advice on vegetable nurseries, organic farming methods like composting and mulching, methods to improve their soil and different planting materials to improve crop diversity,” KGA’s Project Officer Mary Timothy told IPS, adding that the NGO mentors youths involved in farming initiatives in other provinces as well.

Despite challenges along the way, there is no doubting the success of this unique agricultural initiative.

In addition to selling their fresh produce directly to the community, the youth take bulk orders twice a week from the local hospital and from four major businesses on the island.  In a week, they can produce and sell between 500 to 1,000 “lots” – a local measurement arrived at by eyeballing the produce — of fruit and vegetables, earning an approximate income of between 600 and 1,300 dollars.

Local households also support the initiative, with some purchasing produce directly from the farm.

By December 2012, the boys had earned enough money to pay for their needs and enrol as full-time students. Their levels of nutrition have also improved in leaps and bounds.

“We eat vegetables for a balanced diet, sometimes for lunch or in the evening,” said Arathe. “The children are starting to grow healthy.”

Leslie Kiadapite, principal field officer at the Ministry of Agriculture and Livestock in Munda, told IPS, “It is very important to engage young people to become involved in agriculture. Even with an education, not everyone here will be employed in the formal sector. So we encourage young people to cultivate the land.

“This is important for food security, income generation and sustainable livelihoods,” she added.

Eighty percent of this nation’s population of 552,000 reap a livelihood from subsistence agriculture, cash crops and fishing. Yet food production still falls short of meeting the demands of a population growing at an annual rate of 2.3 percent, while the legacy of a five-year civil conflict (1999-2003), which erupted following disputes between communities about access to land and resources on the main island of Guadalcanal, heavily impacted infrastructure and services throughout the country.

According to the World Health Organisation (WHO), 14 percent of children below five years of age, or approximately 5,000 in the Solomon Islands are underweight, and 33 percent suffer from stunting due to malnutrition.

Arathe’s project seems to point the way towards achieving national goals. Beyond attaining nutritional self-sufficiency, farm labour is teaching boys skills pertaining to livelihood generation, food security and better eating habits, which will benefit them throughout their lifetime.

“They now have experience,” Arathe told IPS. “They know how to plant and harvest…They can work at the nursery and do transplanting (of crops). They are much happier, too,” he added.