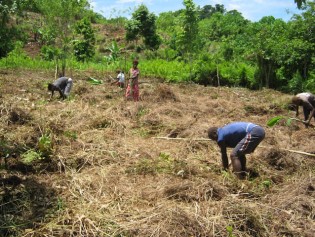 By Claudia Ciobanu
A huge moment for reform of the industrial farming system in Europe has many stakeholders on edge. Farmers who are feeling the crunch of rising input costs – from fertilisers to fuel – believe they can benefit greatly from a transition to more traditional and sustainable farming methods.

Food Security and the Failure of Mechanisation in DRC

By Donat Muamba
Mechanisation was expected to transform agriculture in the Democratic Republic of Congo's central province of East Kasaï. But a project to offer tractors for ploughing land has fallen flat.

By Catherine Wilson
Papua New Guinea’s high fertility rate is exerting pressure on land and food production in a country where 80 percent of the population lives in rural communities. But the National Agricultural Research Institute (NARI) argues that traditions of subsistence agriculture provide a firm foundation to build food security for a growing population.
ADVERTISEMENT ADVERTISEMENT