WARSAW, Aug 28 2012 (IPS) - A huge moment for reform of the industrial farming system in Europe has many stakeholders on edge. Farmers who are feeling the crunch of rising input costs – from fertilisers to fuel – believe they can benefit greatly from a transition to more traditional and sustainable farming methods. 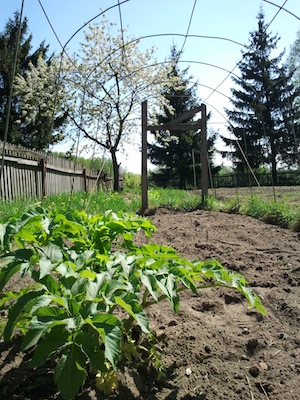 An organic farm in the village of Swierze Panki, about 100 kilometres east of the Polish capital Warsaw. Credit: Claudia Ciobanu/IPS

But opponents of the European Commission-sponsored reform package – which aims to places tough conditionalities upon subsidies to local farmers in an effort to overhaul an ineffective system of food production – say it could stifle productivity.

In times of global crisis, ensuring food supplies is as daunting a task as ever. But advocates of reform say that the answer does not lie in industrial food production.

“We are already producing a lot in Europe,” Trees Robijns, EU agriculture policy officer at BirdLife, one of the NGOs pushing for reform at the local level in Brussels, told IPS.

“But we have to ask ourselves at what cost and for how long we can go on this way. If we do not set our farming on a sound agro-environmental basis, we will lose out in the long-term. We are destroying our water, soils, our biodiversity, and this will lead to decreased productivity.”

The latest International Assessment of Agricultural Knowledge, Science and Technology for Development (IAASTD) report, authored by a large international group of scientists and endorsed by governments around the world, shows that sustainable family farming is the best way to address the food and environmental challenges facing the world.

La Via Campesina, a global farmers’ network comprised of over 20 million peasants, also published a report concluding that smaller-scale agriculture can feed the world.

According to the European Network for Rural Development, a body working under the remit of the European Commission, current EU policies could be having a detrimental effect on subsistence agriculture by regarding small farms as “an unwanted feature that hinders the competitiveness of a nation’s agriculture.”

In Eastern European states like Romania, up to two thirds of farms in the country can be subsistence or semi-subsistence. And they are slowly disappearing.

“Most of the people have given up farming in our village, they now go to the city to work and use their salaries to buy food from supermarkets,” Marcel Has, a Romanian farmer who works on a two-hectare farm – most of it on rented land – in Firiteaz village in Western Romania, told IPS.

“I was also about to give up two years ago, but then I read in a farmers’ magazine about the possibility of connecting directly with consumers who are interested in the kind of clean, local food I can provide. Now I can support my family, fix my house. I think there is a future in ecological farming – food in the supermarkets is of poor quality and people want to eat better,” he said.

The CAP reform proposed by the Commission is a step in the direction of strengthening smaller farms, by recognising their role in protecting the environment and biodiversity, and compensating them for it.

The Commission is also a proponent of more organic farming– which now accounts for roughly five percent of farming in the EU – and of encouraging young farmers to stay on their land.

Certainly, food security is more of an issue outside of Europe. But there, too, it could hardly be argued that European-style industrial farming is the solution.

Export subsidies for European agri-products, an answer to overproduction by local farmers, resulted in the ’dumping’ of items like grain, sugar and animal products on  international markets at prices so low that local farmers in developing countries were thrown out of business in huge droves.

Numerous studies document the negative impacts of dumping by the EU in developing countries, among them an a recent analysis of effects of EU milk exports on Jamaican farmers and an assessment of impacts of EU sugar trade in Kenya, Tanzania and Uganda.

Responding to strong international criticism, the EU has been addressing this issue.

”In fact, export refunds are only used very occasionally, in times of crisis, when world prices are already very low – so their impact is limited.”

But the global farmers’ organisation, La Via Campesina (LVC), is of a different opinion: according to the network of 20 million peasants, the EU, like the United States and other rich countries, are excluding several agricultural sectors (such as poultry and pork in the case of the EU) from subsidies reductions negotiated within the World Trade Organisation.

LVC also claims that between 1992 and 2008, the EU has included more and more subsidies into the so-called “green box” category of permitted financial aid to domestic farmers.

The EU is today the biggest exporter of agri-products in the world, with 100 billion euros worth of products exported in 2011.

Europe is also the leading importer of agricultural goods, largely animal foodstuffs whose production comes with very high environmental and social costs in exporting countries, according to the Transnational Institute.

Gerard Choplin, policy officer at European Coordination La Via Campesina, told IPS that the way forward to ensuring food security is the relocalisation of agriculture and strengthening of local farmers everywhere.

He said this could be encouraged through the following measures: banning exports at prices below production costs in the exporting country; allowing tarrifs on imported products at below production costs in the importing country; avoiding structural surpluses (overproduction leading to dumping, which has marred the CAP in the past), and, when it comes to CAP, awarding direct payments not based on the area of the farm, but rather per capita, thus rewarding sustainable small farms, ecological production methods, and difficult farming conditions.

When compared to the main debates over CAP in Brussels, capital of the European Union, these are radical proposals.

But the Commission is at least recognising the damaging impacts of export subsidies and has more recently started making efforts to connect its work on development and agriculture, by putting more focus on offering EU financial support for strengthening local food production capacities in developing countries, beginning with Eastern Europe and North Africa.

These steps could be a small start, if they are not hampered by further political manoeuvring.