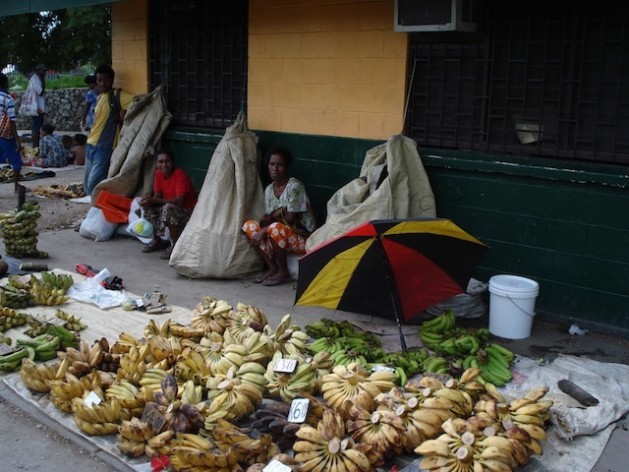 PORT MORESBY, Jun 6 2012 (IPS) - Papua New Guinea’s high fertility rate is exerting pressure on land and food production in a country where 80 percent of the population lives in rural communities. But the National Agricultural Research Institute (NARI) argues that traditions of subsistence agriculture provide a firm foundation to build food security for a growing population.

Papua New Guinea, a fertile island nation in the South Pacific, is a natural habitat for diverse food crops and wild plants. Most people in rural and peri-urban areas grow their own fruit and vegetables for consumption, while in rural villages selling agricultural produce can be a significant source of income.

According to the United Nations Food and Agriculture Organisation (FAO), the nation’s strong agricultural sector could easily ensure food security, with agricultural exports of 882 million dollars exceeding imports of 425 million dollars. Furthermore, the country has an agricultural labour force of five million, out of a population of 6.9 million people.

However, Sim Sar, programme director of agricultural systems improvement at NARI, warns, “Food production is not keeping pace with population growth. Approximately 42 percent of the population in rural and urban areas are unable to meet a target food energy requirement of 2000 calories per person per day.”

The UNFPA’s 2011 State of World Population Report emphasises, “In many parts of the developing world, where population growth is outpacing economic growth, the need for reproductive health services, especially family planning, remains great.”

Contraceptive prevalence in Papua New Guinea is 24 percent, while the regional range in the Pacific Islands is 20.5-46.1 percent, lagging well behind the 62 percent average in all other developing countries.

Distant rural communities and under-resourced rural health centres are obstacles to the dissemination of family planning materials and services.

Russel Kitau, Chair of Public Health at the University of Papua New Guinea, believes too many people ask, “Why should the government stop (us) from having many children? Who is going to take care of (us) when we get old? Is it the government?”

“Another (obstacle) is the fear that the side effects of contraception might cause cancer,” he continued, adding that some people believe women’s use of contraceptives could encourage infidelity.

Through the National Health Plan (2011-2020), the government aims to expand free family planning coverage and improve sexual and reproductive health for adolescents.

“We are doing our best to train our health workers to go back to the health centres and implement the family planning programme,” Kitau explained. “But funding for family planning is very low compared with programmes for (prevention and treatment of) HIV/AIDS. The small amount of donations and funding from development partners is not sufficient or sustainable in the long run.”

A large and growing population will be a reality for years to come in Papua New Guinea and Sar believes the agricultural sector must be at the centre of strategies to ensure sustainable nutritious food supplies.

“Agriculture in PNG is the primary source of food security,” he explained. “Hence the key strategy to attain food security is the enhancement of productivity, efficiency and stability of agricultural production systems.”

When questioned about challenges to productivity, 65 percent of growers identified pests and diseases, 32 percent cited the high price or shortage of fertilisers and seeds, while 22 percent blamed bad weather.

Land is central to agricultural productivity and sustaining lives in the developing world, especially when, in times of poverty, people turn to land-based resources for sustenance. Most land in Papua New Guinea is held under customary tenure and has not been surveyed or registered, so there are disputes over land access and rights.

Land registration would also allow for easier and more robust exchanges of land between parties, thereby making land which is not being utilised accessible to those who need it.

“Though 80-90 percent of land is under customary tenure, not everyone has access to land due to uneven distribution (among) clan members, migration and death,” Sar added. “Hence the number of landless people is increasing, particularly those residing in urban areas or those in marginalised and disadvantaged areas.”

Only by investing now in family planning, agriculture and land reform will Papua New Guinea ensure a sustainable future for the next generation.