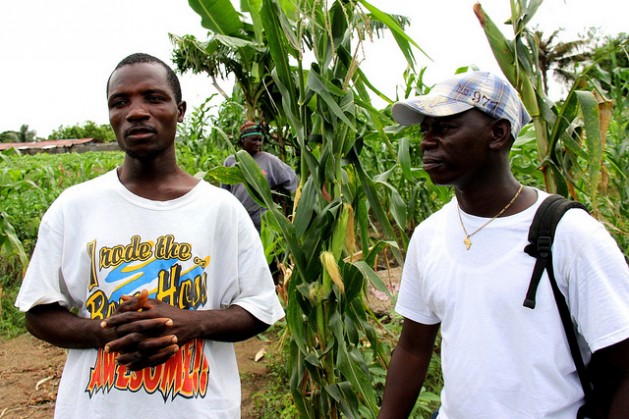 MONROVIA, Jun 11 2012 (IPS) - With his gold chain, baseball cap, and baggy denim shorts, Junior Toe wears the uniform of Liberia’s urban youth. Spend just a few minutes with the young man and it is evident that he possesses the street smarts to match the look.

However, Toe’s area of expertise lies outside the city and on the farm.

“Look at the pepper seed there,” he says while touring a community farm not far from downtown Monrovia. “Put it in the ground, water it a few times, and you will make some money.”

Toe is the founder and executive director of the Community Youth Network Program (CYNP), which trains young people in agriculture and livestock farming.

“Over there, we have a nursery for cabbages,” he continues. “If you try and grow cabbage in the ground now, the rains will give it a hard time. This is the kind of knowledge we share.”

Food security and meaningful employment for Liberia’s youth have long been major challenges for this West African nation. Now, a number of community-based programmes and government initiatives are working to address both. Officials say they are hopeful that this is the start of a major shift in how young Liberians participate in the agricultural sector.

According to a 2010 report by the United Nations Development Programme, 30 percent of Liberia’s land is arable and close to 90 percent of crop areas receive adequate rain. Yet according to the Liberia Food Security Outlook report for 2012, 60 percent of the population is classified as “food insecure”.

Liberia’s agricultural sector was devastated by decades of mismanagement and war. In 1980, Master Sergeant Samuel Doe seized power in a coup and his rule, which ended 10 years later, was characterised by incompetent policies that hindered development.

In 1989, the country broke out in a civil war that continued sporadically until 2003. Those years saw warlord – and later, president – Charles Taylor plunder the country’s resources and fuel violence that killed 250,000 people. Even greater numbers fled Liberia or were repeatedly displaced.

According to a 2009 assessment by the Food and Agriculture Organization of the United Nations (FAO), between 1987 and 2005 the production of the country’s staple food, rice, fell by 76 percent.

“Agricultural production has increased in recent years as the sector slowly recovers, but yields are still well below the regional average and food insecurity is high,” the document states, adding that Liberia still only produces roughly 40 percent of the rice it needs to feed its almost four million people.

Also affected by the conflict were Liberia’s youth, tens of thousands of whom were coerced into joining rebel factions when they were just boys and girls. Rehabilitation projects run by the U.N. attempted to reintegrate ex-combatants and victims of the war, but those programmes are now widely criticised as failures.

“I went through the disarmament process, through the one week of training,” Toe says, chuckling.

“But many people really never took advantage of that….The men were traumatised; they were used to the gun, used to money, and used to getting what they wanted fast.”

Toe says that after seeing the shortcomings of the rehabilitation programmes, he set out to launch his own, one that would be better suited to Liberia. He reasoned that with fertile soil and a warm and wet climate, agriculture was the way to go. So he founded the CYNP in 2007.

The organisation now has a training centre in Bensonville, Montserrado County (roughly an hour’s drive northeast of Monrovia). In the county, land is divided into eight farms where former trainees and partners manage plots on either their own property or on community land. The Young Farmers Forum keeps participants connected and works to create awareness and attract new recruits.

Crucial to CYNP’s success, and what sets it apart from the U.N.’s past work with ex-combatants, is an emphasis on ownership. “We work with you to develop your own project in your community where you manage it,” Toe says.

According to Toe, there are currently around 100 youths enrolled in six-month long programmes at the Bensonville facility, and as many as 500 graduates are now farming in communities around Montserrado.

A number of those graduates can be found working a plot of unused government land in the Fiamah neighbourhood of Monrovia. Alfred Kapehe says that CYNP helped him progress from subsistence agriculture to smallholder commercial farming. Likewise, James Paylay says the small farm he keeps brings in enough money for him to rent a home, feed his family, and pay his children’s school fees.

“Everything comes from the garden,” Paylay says.

Liberian Deputy Minister for Youth Development Sam Hare acknowledged an often-cited USAID (the U.S. government agency providing economic and humanitarian assistance) statistic indicating that just three percent of Liberian youths are interested in farming. But, in an interview with IPS, he maintains that the situation is changing.

“Agriculture has been identified as the key to breaking the youth unemployment challenge,” he says.

“We have been working with the Ministry of Agriculture and other stakeholders to make people see that agriculture, viewed in the right perspective, is a tool for wealth.”

Hare says that the challenge is to convince young people that they can take farming beyond a subsistence level and make a commercial enterprise of it.

“Our vocational training priorities now need to be redefined and restructured to meet the real needs of Liberia. And youth and agriculture should be the focus,” he adds.

Joseph Boiwu, a FAO programme officer for Liberia, says that another impediment slowing youths’ entry into agriculture is the labour-intensive nature of the work. To address this problem the FAO and partners distributed 24 power tillers to small groups of farmers in Bong, Lofa, and Nimba counties in 2010.

“We’re going to now reassess the interest of the youth,” Boiwu says. If the initiative is deemed a success, it could grow to include heavy machinery such as tractors.

Prince Sampson, head of Youth for Development and Progressive Action in Bong County in north-central Liberia, describes a programme his organisation runs that is similar to the CYNP’s. Like Toe, he says that he learned from the mistakes of post-war workshops that failed to make long-term investments in people.

“The ex-combatants had training in carpentry, masonry, and other skills,” Sampson says.

“And then after that, there wasn’t anything substantial for them to do. You had them trained, and then they didn’t have a source of income. So they went back to square one.”

Sampson, who has worked with war-affected youth since 1992, maintains that agriculture is different because there is an element of immediate responsibility.

“The guys…They eat the very rice they grow. The vegetables are sold, the proceeds are divided among them, and they have some cash for their pockets.”

Sampson describes the importance of involving the country’s former combatants in agriculture as a matter of food security.

“We make them understand the usefulness of the years still ahead, in spite of the years that were wasted during the war,” he says.

“We let them understand that the strength they had – their youthful exuberance – can still be harnessed.”