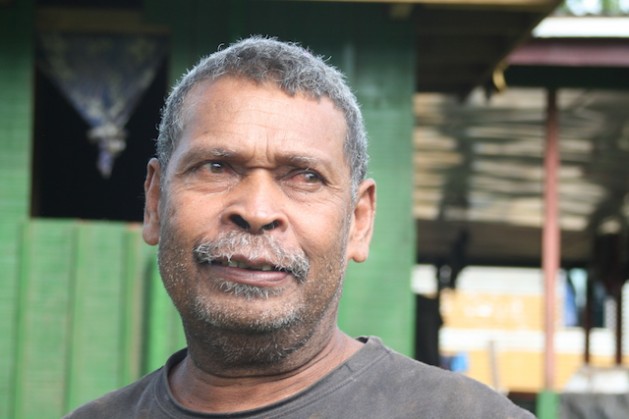 Eparama Kelo, a retired teacher, said a Fiji newspaper had recently reported that the plan was to bring in 18,000 to 20,000 Kiribatis to Vanua Levu. Credit: Christopher Pala/IPS

NAVIAVIA, Fiji, Jun 9 2014 (IPS) - You can count the inhabitants of this isolated, tidy village of multi-coloured houses and flower bushes among global warming’s first victims – but not in the usual sense.

They are descendants of labourers from the Solomon Islands who came to Fiji to work on the coconut plantations in the 19th century. In 1947, they were invited to move onto a large one called the Natoavatu Estate that the Anglican Church once inherited and were told they could stay there indefinitely as long as they practiced the Anglican faith.

In late May, the Church sold most of the 2331.3-hectare estate to the island nation of Kiribati, leaving the 270 villagers, who said they used 283 hectares to feed themselves, with only 125 hectares. Anote Tong, the president of Kiribati, said he bought land in Vanua Levu, Fiji’s second-largest island, so that his 103,000 people will have some high ground to go to when a rising sea makes his nation of 33 low-lying coral atolls unliveable. Credit: Christopher Pala/IPS

Kiribati’s president, Anote Tong, said he bought the land so that his 103,000 people will have some high ground to go to when a rising sea makes his nation of 33 low-lying coral atolls unliveable.

“We would hope not to put everyone on [this] one piece of land, but if it became absolutely necessary, yes, we could do it,” he told the Associated Press.

For years, Tong has claimed in climate change conferences and in interviews that sea-level rise was already claiming a heavy toll on his people, eroding beaches, destroying buildings and crops, forcing the evacuation of a village and wiping out an entire island.

His views are echoed by Conservation International, a large NGO based near Washington, D.C., on whose board Tong sits. The residents of “Kiribati, where the effects of rising sea levels already are being felt, [are] on the front lines of climate change,” says its website.

In Tarawa, Kiribati’s overcrowded capital island where half the population of 103,000 lives, Tong often warns in speeches that climate change will destroy their homeland but that he is working hard to obtain compensation from the countries that caused it.

Kiribati, with a per-capita income of 1,600 dollars, receives more foreign aid per capita than any other Pacific nation.

This year, the government organised a competition for the best song on climate change. The refrain of the winning song, frequently played in English on the state radio, is “The angry sea will kill us all.”

But while Tong’s warnings of impending doom for atoll dwellers have brought him a measure of fame abroad and even a panel that nominated him for a Nobel Peace Prize, in Kiribati they elicit confusion in some people and derision in others.

“I don’t think he did a proper valuation. And it’s clear the government doesn’t have any idea of what it’s going to do with the property now.” -- former Kiribati president, Teburoro Tito

“A lot of people now worry about climate change,” said Tealoy Pupu, a 20-year-old student, as she lay pandanus leaves out to dry. “We just don’t know what to think.”

Tong’s predecessor as president, Teburoro Tito, had read the scientific studies on atoll dynamics. “The scientists tell us that our reefs are healthy and can grow and rise with the sea level, so there is absolutely no need to buy land in Fiji or anywhere else,” he said emphatically. “How can we ask for foreign aid when we spend our own money on such foolish things?”

“We know that the whole reef structure can grow at 10 to 15 mm a year, which is faster than the expected sea-level rise,” confirmed Paul Kench, an atoll geo-morphologist at the University of Auckland.

“As long as the reef is growing and you have an abundant supply of sand, there’s no reason reef growth can’t keep up with sea-level rise.”

Kench and others also say that sea-level rise has had no effect so far on any Pacific atoll. They say that common images of waves crashing into homes give a false impression of permanent flooding when in fact they are caused by inappropriate shoreline modifications like seawalls to protect land reclaimed from the sea or by building causeways between islands.

In Vanua Levu, Fiji’s second-largest island, where the property Tong bought is located, an examination of the sales deeds of comparable parcels revealed that Kiribati paid four times more per acre than other buyers in the last few years.

Tito, the former president, said he believed that the 8.7-million-dollar purchase had been done solely for publicity purposes to highlight Tong’s far-sightedness and how seriously he takes climate change. “I don’t think he did a proper valuation,” he said. “And it’s clear the government doesn’t have any idea of what it’s going to do with the property now.”

In his announcement of the completion of the sale, Tong said a committee would be appointed to study what should be done with the land. In a separate statement, the government said the purchase marked “a new milestone” in its “development plans, which include exploring options of commercial, industrial and agricultural undertakings such as fish canning, beef/poultry farming, fruit and vegetable farming.”

Tong, through his spokesman, Rimon Rimon, declined all comment.

Tetawa Tatai, a former health minister and a member of parliament, said he was shocked that the Church of England, which he called “one of the most trusted institutions in the world,” would “gouge one of the poorest and most isolated countries in the world.”

In an interview in Suva, Bishop Winston Hanapua, Archbishop of the Polynesian Diocese of the Anglican Church, denied that the church had taken advantage of an inexperienced buyer widely believed to be representing the world’s first climate refugees.

On the contrary, he said, “I felt good about the whole thing because Kiribati is part of my jurisdiction. We were open for any offer, and there was an offer.”

Back in Naviavia, the Solomon Islander Anglican minister, Koroi Salacieli, complained that the Church had given him no clear notion of how many Kiribatis would be coming into their midst.

He, other villagers and an outside expert agreed that the property, of which two thirds is covered by densely forested steep hills, could only support a few hundred more people.

These would need housing and lengthy training to learn how to practice Fiji’s agriculture, which involves using bullocks to plough the land. In Kiribati, there is no agriculture to speak of: rice, canned meat and fresh fish form the mainstay of the diet.

Eparama Kelo, a retired teacher, said a Fiji newspaper had recently reported that the plan was to bring in 18,000 to 20,000 Kiribatis. “What are we going to do if they come?” he asked disconsolately.

Christopher Pala is a Washington-based journalist whose trip to the Pacific was supported by a grant from the Fund for Investigative Journalism.