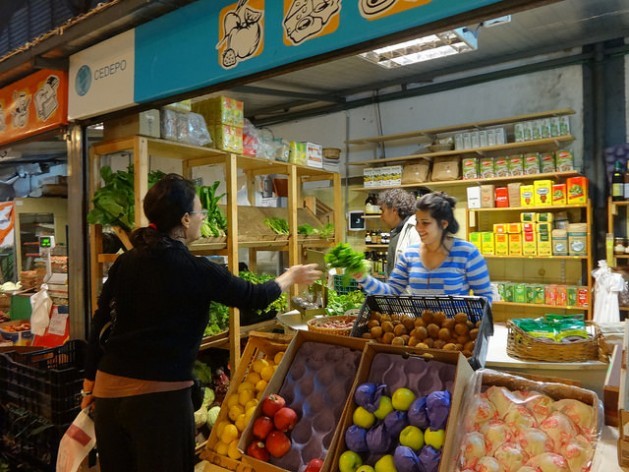 BUENOS AIRES, Aug 13 2015 (IPS) - It’s pouring rain in the capital of Argentina, but customers haven’t stayed away from the Bonpland Solidarity Economy Market, where family farmers sell their produce. The government has now decided to give them a label to identify and strengthen this important segment of the economy: small farmers.

Norma Araujo, her husband and son are late getting to the market in the Buenos Aires neighbourhood of Palermo Hollywood because the heavy rains made it difficult to navigate the dirt roads to their farm, in the municipality of Florencio Varela, 38 km from the capital.

They quickly set up their fruit and vegetable stand as the first customers reach the old warehouse, which was closed down as a market during the severe economic crisis that broke out in late 2001. Today, 25 stands offer products sold by social, indigenous and peasant organisations, which are produced without slave labour and under the rules of fair trade.

“Our vegetables are completely natural. They are grown without toxic agrochemicals,” Araujo told IPS. She is a member of the Florencio Varela Family Farmers Cooperative, which also sells chicken, eggs, suckling pig and rabbit.

Argentina’s new label forms part of a collective effort by the Mercosur (Southern Common Market) which began to work with such labels four years ago, as part of the Specialised Meeting on Family Agriculture (REAF), Raimundo Laugero explained.

Brazil – a member of Mercosur along with Argentina, Paraguay, Uruguay and Venezuela – was a pioneer in the bloc, creating a family farming label in 2009, according to the REAF.

Bolivia, Chile and Ecuador also take part in the REAF, which brings together governments and family farming organisations. The REAF announced that in June Chile created its own label, “Manos Campesinas” (peasant hands) for “healthy products of peasant origin, made on a small scale, which foment local development.”

Ecuador and Bolivia have also taken decisive steps towards creating a label that would “defend food sovereignty, rural incomes and access to local foods.” Uruguay, meanwhile, is holding a series of meetings “on the creation of a family agriculture label.”

“The idea is to give small farmers a chance, and here we have people from all around the country, who wouldn’t otherwise have the possibility of selling their goods,” Alvarado said.

The ministry of agriculture, livestock and fishing took another step in that direction with the creation in July of the “Produced by Family Farms” label, “to enhance the visibility of, inform and raise awareness about the significant contribution that family farms make to food security and sovereignty.”

According to the ministry, there are 120,000 family farms in this country of 43 million people, and the sector is “the main supplier of food for the Argentine population, providing approximately 70 percent of the daily diet.”

“A label identifying products grown on family farms not only makes the sector more visible but foments a dialogue between consumers and farmers who have a presence in the countryside across the entire nation, generating territorial sovereignty,” said Raimundo Laugero, director of programmes and projects in the ministry’s family agriculture secretariat.

In his interview with IPS, Laugero said the label will not only identify products as coming from the family agriculture sector, but will “guarantee health controls, chemical-free and non-industrial production, and production characterised by diversity, unlike monoculture farming.

“When we’re talking about a product from family agriculture, the symbolic value is that they are produced through artisanal processes and with work by the family, and one fundamental aspect is that behind the product are the faces of people who live in the countryside,” he said.

Agriculture is one of the pillars of the economy of this South American nation, accounting for 13 percent of GDP, 55.8 percent of exports and 35.6 percent of direct and indirect employment.

María José Otero, a pharmacist, has come a long way to the market on her bicycle, but she doesn’t mind. For her family she wants “the healthiest and most natural diet possible, free of chemicals.”

She also shops here because of “a social question” – she wants to benefit those “who produce natural food without so much industrialisation, while avoiding the middlemen who drive up food prices.

“Besides, I’m really interested in the impact caused by the act of consuming something with awareness,” she added. “That means taking care of the environment where you work, respecting animals. It’s not the same thing to consume eggs from animals that walk about and eat naturally as from animals that are cruelly treated and packed into warehouses, fed in horrible ways.”

Otero said the new label was “great.” “There’s a lot of deception in this also, from people who say they’re selling organic products or products made with a social conscience, and it’s a lie. This label gives you a guarantee,” she said.

“This will especially help the public become aware of what it means to help small farmers. So they can realise that what they pay and what they consume really goes to them, and for the people who do the work to really get paid what they are due,” Alvarado said.

Laugero also stressed that a significant aspect of the new label is that it is linked to “participatory guarantee systems for agroecological products.”

He pointed out that normally when farmers apply for a label recognising their products, they need to turn to a company that carries out the certification process, while the concept “agroecological” has other components.

He mentioned six pilot projects in Argentina, of participatory guarantee systems – basically locally focused quality assurance systems – for agroecological products, which involve organised farmers and consumers, and which the state will now support as well.

“With the label, they’re going to do much better, because they’ll have a more massive reach, and more people will be included,” he said.

At the Bonpland market, Claudia Giorgi, a member of the La Asamblearia cooperative, which works as part of a network with other social organisations, is preparing shipments to another province which will use the same transportation to send products back, to cut costs.

“What is produced in each social organisation is traded for products from other groups, at each organisation’s cost, which is the producers’ costs plus what is spent on logistics,” she explained to IPS.

She said she didn’t have any information yet about the new label, but believes that it will be a good thing if it proves to be “functional” and if it differs from labels that “are profit-making schemes” and “have a cost.”

The resolution creating the new label states that one of the aims is to “promote new channels of marketing and sales points.”

“But that doesn’t always translate into profits,” he said. “We need to work hard on those aspects so that income also ends up in the hands of family farmers.”

In her case, Araujo puts the emphasis on solving even more simple problems, such as finding transportation for her vegetables to the market, even when it rains.

“They should fix our dirt roads,” she said, clarifying that small farmers themselves have offered to participate in the task.