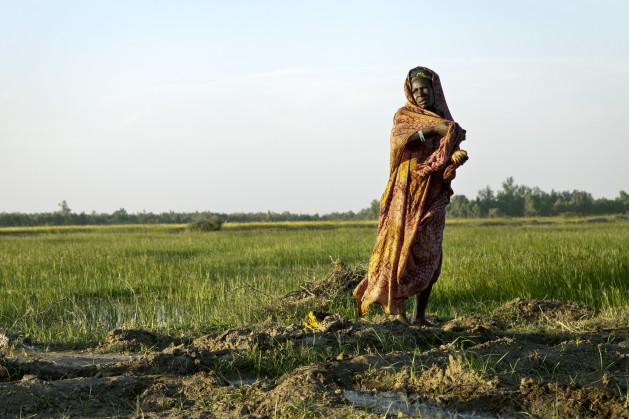 Women are the backbone of the farming sector and have a crucial role to play in improving nutrition through food preparation and the education of children. Credit: UN Photo/Marco Dormino

ROME, Oct 15 2014 (IPS) - It does not make the headlines, but 2014 is the International Year of Family Farming (IYFF) and family farming will be centre-stage at this year’s World Food Day on Oct. 16 at the Food and Agriculture Organisation of the United Nations (FAO).

“If we are serious about fighting hunger we need to promote family farming as a way of production and also […] as a way of life. It is much more than a way of agricultural production”, says Marcela Villarreal, Director of FAO’s Office for Partnerships, Advocacy and Capacity Development.

According to FAO, family farming – which is the largest employer in the world – can help combat hunger and poverty and contribute to healthy food systems. It can also play a role in protecting the environment and managing natural resources in a sustainable way.

There is no official definition for family farming, which sometimes replaces the term ‘smallholders’, but its key features are family ownership and the use of mainly non-wage labour provided by family members.

A FAO working paper, which used figures from the World Census of Agriculture, calculates that “there are more than 570 million farms in the world and more than 500 million of these are owned by families.”

East and South Asia along with the Pacific account for 74 percent of the 570 million farms, with China and India accounting for 35 and 24 percent respectively. Only three percent of farms are located in the Middle East and North Africa, and Latin America and the Caribbean represent four percent each.

Farmers’ organisations from Africa, America, Asia, Europe and Oceania met in Abu Dhabi in January at the start of IYFF and issued a set of five demands to make family farming the “cornerstone of solid sustainable rural development, conceived of as an integral part of the global and harmonised development of each nation and each people while preserving the environment and natural resources.”

Among others, they called for strategies to attract young people and prevent migration, creating the conditions for them to take over their parents’ farms or set up new farms.

With regards to gender equality, they criticised discrimination over inheritance rules and wages as unacceptable, saying that women are the backbone of the farming sector and have a crucial role to play in improving nutrition through food preparation and the education of children.

The farmers’ organisations also called on governments to finance the creation of cooperatives, and guarantee access to markets and loans for smallholders.

According to José Antonio Osaba, Coordinator of the IYFF-2014 Civil Society Programme of the World Rural Forum, all nations, and especially developing nations, “have the right to protect their agriculture so as to be able to feed themselves and trade under equitable conditions … the reverse is now the case: a small handful of major exporting nations with high productivity levels and considerable subsidies dominate the world food market.”

Ranja Sengupta, senior researcher at the Third World Network in India, shares Osaba’s position. On the side-lines of the Asia-Europe Peoples’ Forum held in Milan, Italy, on Oct. 10-12, she told IPS that free trade agreements pose a serious problem for the capability of developing countries to sustain their people.

“I think in countries like India, large countries with a large, hungry population, there is no alternative to strengthening small family-based farms”, she said.

“We cannot depend on imported food. So for us, if we have to provide food to our people, we have to take it from our producers and we have to ensure that they are able to produce; that’s why we do need to give essential subsidies – at least for now”, she added.

“It is something which should be non-negotiable for any developing country government and no global agreement should be able to actually say ‘no’ to that”, Sengupta concluded.