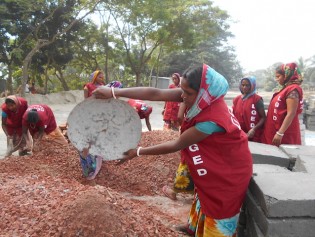 By Ivet González
Scattered houses amidst small fields of vegetables and other crops line the road to the La China farm on the outskirts of the Cuban capital. This is where Hortensia Martínez works – a mechanical engineer who has been called crazy by many for deciding to become a small farmer.

By Jeffrey Moyo
For the last 13 years, Trynos Mbweku, the headman of Mwenezi district in southeastern Zimbabwe, has had to use a cart to fetch water from the only remaining borehole in his area, which lies some 10 kilometres from his home.

By Raúl Pierri
The countries of the developing South should remove the barriers still faced by small-scale farmers, because smallholders play a key role in economic growth, says Carlos Seré, the International Fund for Agricultural Development’s (IFAD) chief development strategist.

By Edgardo Ayala and Claudia Ávalos
Amanda Menjívar is moved by the sight of the 16 sewing machines donated to help a group of local women set up a sewing centre to get over the devastating effects of the disaster caused by Hurricane Ida in the Salvadoran town of Verapaz.
ADVERTISEMENT ADVERTISEMENT