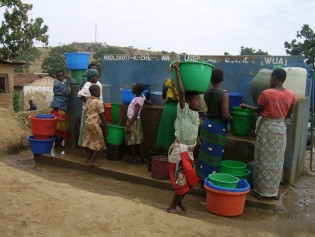 By Charity Chimungu Phiri
Malawi considers itself ‘a god fearing nation’ so much that any act ‘out of the ordinary’ is said to be either satanic, a sin or demonic. Even a drink or a walk could be satanic in the country if you are not careful!

By Charity Chimungu Phiri
The first successful test-flight of an unmanned aerial vehicle (UAV) or drone was an unhindered 10 km journey from a community health centre to the Kamuzu central hospital laboratory in the capital Lilongwe. Local community members watched with excitement as the drone rose into the sky, after being launched by the United Nations Children’s Emergency Fund (UNICEF) and government of Malawi at the area 25 health centre.

By Charity Chimungu Phiri
Imagine fleeing from your home because you feel unprotected by the people who are required to do so by law. And when you get to where you feel safer, the very same people come to persuade your keepers to let you come back with them, claiming you are running away from nothing! Well, this is the situation some 5,800 Mozambican nationals have found themselves in. Hundreds of them, including unaccompanied children, have been fleeing from Tete Province, near the Malawi border, since late last year following renewed fighting between government forces and opposition Renamo fighters.

By Charity Chimungu Phiri
Being a single mother at the age of 19 is not what most teenage girls want for themselves. But this is the life Esther Mkwakwasa is living in Namphungo village in Mulanje District. Orphaned at the age of 14, Esther saw herself being moved from one foster home to another until she got pregnant.

By Charity Chimungu Phiri
Patrick Martin, 14, and his brother Mayeso, 15, are safely home for the moment with their mother and other siblings in Kasonya village, Phalombe District in southern Malawi, after they and 12 other children were rescued from being trafficked to neighbouring Mozambique last month by their father.

By Charity Chimungu Phiri
Three-month-old Simplicious Gift lives in Mafunga village in Malawi’s southern rural district of Chikhwawa, 48 kilometres from the commercial capital, Blantyre. His is a poor farming village of about 1,200 people who live off their harvests and the produce from their livestock of goats, pigs and cows.
ADVERTISEMENT ADVERTISEMENT