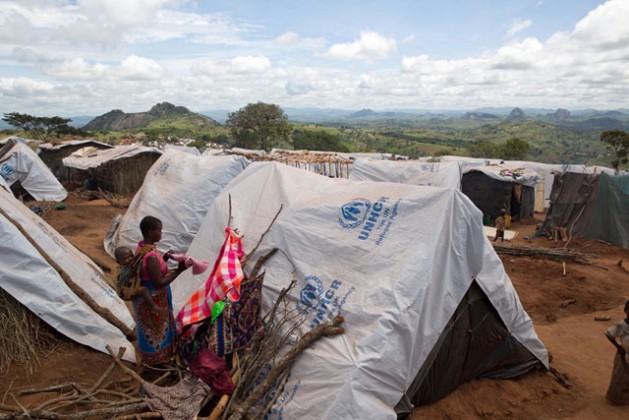 BLANTYRE, Malawi, Feb 25 2016 (IPS) - Imagine fleeing from your home because you feel unprotected by the people who are required to do so by law. And when you get to where you feel safer, the very same people come to persuade your keepers to let you come back with them, claiming you are running away from nothing! Well, this is the situation some 5,800 Mozambican nationals have found themselves in. Hundreds of them, including unaccompanied children, have been fleeing from Tete Province, near the Malawi border, since late last year following renewed fighting between government forces and opposition Renamo fighters.

The province is said to be one of the strongholds of Renamo, and the people say they are running away because allegedly government forces have been attacking them for supporting Renamo. They have since fled to Kapise village in Mwanza district in Southern Malawi, 300 meters from the border. About two-thirds of the refugees are women and children mostly below five years old, as well as the elderly. The refugees, whose numbers continue to steadily rise every day, are living in desperate conditions at the camp scrambling for necessities with 150 local families there.

A statement from Médecins Sans Frontières (MSF) says that refugees do not have enough water and sanitation facilities, have poor housing, and are at risk of diseases. They are also in fear of getting attacked by soldiers from their country. A two month-old baby died of diarrhoea at the camp last month. And last week alone, MSF, which set up a clinic at the camp, treated over 380 malaria cases. Even worse, the Malawi government is under pressure from Mozambique not to recognize the people as refugees, according to MSF.

The humanitarian organization states Mozambique sent several delegates to the camp to try and persuade the displaced people to come back, arguing that there was no conflict back home. However Mozambican media reports indicate that tensions have increased in recent weeks in Tete, Zambezia and Sofala provinces, with daily attacks and shootings.

MSF, which started its intervention there in November 2015, has since appealed to the Malawi government to move the people to a more spacious camp, 50 kilometers from Kapise, and also away from the border as required by international humanitarian standards.

The alternative location, Luwani, a former refugee camp, is said to be the best option for the displaced people as it has plenty of space, a school, medical centre and a better road. Furthermore, the move, according to MSF, would also allow humanitarian actors such as The Office of the United Nations High Commissioner for Refugees (UNHCR), to plan appropriate services to meet the needs of the displaced community. At a recent press briefing in Blantyre, MSF’s head of mission to Malawi, Maury Gregoire, said they are treating about 159 people every day, with half diagnosed with malaria and the rest having respiratory infections and general body pain. He said the refugees only have 14 latrines whereas the respect of minimum humanitarian conditions requires that at least 20 people have one latrine or in worst case scenarios one latrine for 50 people. According to Gregoire, people have only two boreholes for both domestic and general use: “Each person has on average eight litres of water a day, barely enough to drink and cook and well below the minimum 15 to 20 litres are recommended as a humanitarian minimum in emergency settings.”

MSF has since warned that the strain by the refugees could cause tensions with Malawian families living in the village, especially on access to water. But Malawian authorities are not yet decided on whether to move the refugees or send them back home. Principal Secretary in the Ministry of Home Affairs Beston Chisamile told The Nation newspaper on Thursday that they were still discussing the matter with Mozambican authorities. “Our friends in Mozambique want these people to go back home, so unless a decision is made between the two parties that they should remain in Malawi, then we can start thinking about moving them to a different place,” he said.

The UN’s Refugee Agency representative to Malawi, Monique Ekoko, recently appealed to donors and other humanitarian organisations for more funding to help the refugees. Malawi has hosted refugees from Mozambique before. The Luwani Camp hosted over one million Mozambican refugees who fled from their country’s 16 year civil war between 1977 and 1992. The country is currently facing a tough economic situation of high inflation and interest rates which has left many people struggling to survive. It is estimated that about 2.8 million Malawians themselves are in need of food aid following last season’s dry spell and floods. A report by the Malawi Vulnerability Assessment Committee says about K23 billion (about US$18 million) is needed to feed such people up to the next harvest.