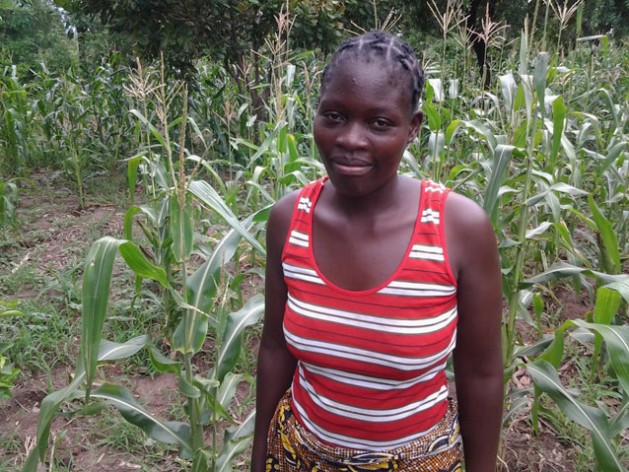 Esther is studying and working and aspires to be a nurse… Credit: Charity Chimungu Phiri/IPS

BLANTYRE, Jan 15 2016 (IPS) - Being a single mother at the age of 19 is not what most teenage girls want for themselves. But this is the life Esther Mkwakwasa is living in Namphungo village in Mulanje District. Orphaned at the age of 14, Esther saw herself being moved from one foster home to another until she got pregnant.

“My biological father died when I was very young. I was an only child. Later my mother remarried and had four other kids. After she died when I was 15-years old, my stepfather took my siblings and moved to town and left me alone in my mother’s village,” she said. Esther then fell pregnant by a classmate while in school.The boy denied responsibility.

“I felt humiliated and alone, I was devastated. It was like the whole world had turned against me. I eventually dropped out of school because I felt like everyone was looking at me,” she said.

Esther blames some traditional beliefs and practices as part of her falling into teen pregnancy. In most districts in the southern part of Malawi, it is customary that when girls reach a certain age they go into initiation camps where they are encouraged to try out having sex with boys in order to test their maturity called kutsatsa fumbi in local language.

“After the initiation I was very much looking forward to having sex so I could not even imagine getting pregnant,” she explained.

This shy young woman is now a sole provider for her toddler with whom she is living alone in a room among some residential plots owned by her uncle. She cleans people’s houses and works in fields in the mornings and studies two hours each afternoon while neighbours look after her son.

Now Esther, who says she wants to be a nurse, is trying to rewrite her life story. She is one of 600,000 teenage mothers who have gone back to school across Malawi since 2014 with the help of the Malawi government, traditional leaders, churches, United Nations organisations and non-governmental organisations such as the Adventist Development and Relief Agency (ADRA).

Through an ADRA Malawi Project called ‘When a mother is a child’, at least 35 girls from seven group village heads in the Juma area have gone back to school.

Mulanje ADRA Community Development Facilitator Belinda Chimombo says the project, which was launched in 2014 as a pilot, is targeting 300 teenage mothers. “Currently we’re only working in seven group villages where the girls have formed 15 groups of 20 people each. Our main goal was to advocate for the return to school of the girl child after we had noted that the number of dropouts was high in this area,” Chimombo said.

She told IPS that most of the girls are very determined and dedicated to finish their education. On her part Member of Parliament for the area, who is also Minister of Gender, Children, Disability and Social Welfare, Patricia Kaliati, thanked all partners who have worked so hard for Malawi to achieve this.

“As I am talking to you now the numbers keep increasing as more and more girls are returning to school”, she said. Kaliati further urged the girls to use the opportunity to be role models to their children and other girls in their communities.

“Even though some of them are being mocked for going back to school they need to be steadfast knowing that this is the only way how they can achieve their goals so they should not be shaken,” she said.

However, the project has also brought about a thorny issue of school fees since most families had ruled out sending their daughters to school. It is also even harder for the girls to qualify for the government bursary because of its competitive nature.

Asked what they are doing on the matter, ADRA’s Chimombo said since the project is a pilot ending in June this year, it is hard for them to convince donors to fund the girls because of issues of sustainability. But MP Kaliati said they had already started sponsoring some of the students.

“When schools were opening this month, we sponsored about 15 students. In a few days we will also be meeting all stakeholders to chart the way forward on the fees issue,” she said.

In Malawi traditional beliefs and practices have been attributed to teen pregnancies and early marriages especially in rural areas.

A recent Malawi Development Goals (MDG) End Line Survey found that one out of every two girls is married before the age of 18 and some as early as 12-years old. The survey also says empowerment and advancement of the girl child, is affected by the pandemic of violence, child marriages, early pregnancies, maternal mortality and low level of access to and retention in education.

Things are slowly changing as more traditional leaders are embracing new ideas and putting in place bylaws to deal with such issues.