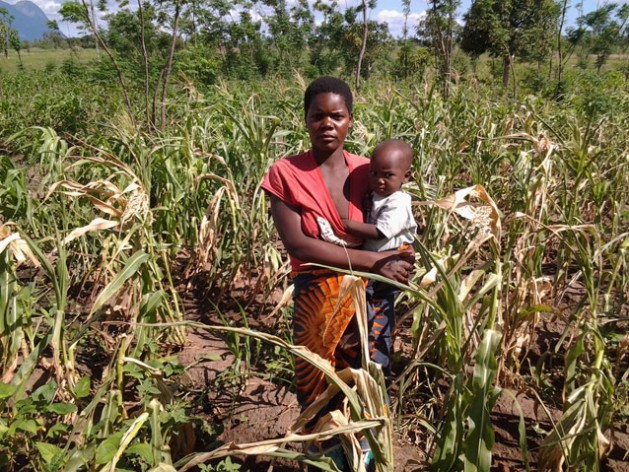 Mofolo, a mother of four, standing in her maize field, suffering the effects of El Nino in Malawi. Credit: Charity Phiri/IPS

BLANTYRE, Jan 18 2016 (IPS) - It is 9 am in the morning but the scorching sun makes it feel like mid-afternoon. This type of weather is what experts are calling El Nino; a heat wave that is affecting countries in southern and eastern Africa.

Since El Nino hit, Malawi has experienced no rain for at least three weeks, leaving people in despair and in fear of going hungry again this year. Malawi has only one rainy season which begins in November and ends in April. When El Nino hit, most people had planted their maize (the country’s staple food) while others had even applied fertiliser.

El Niño is a prolonged warming in the Pacific Ocean sea surface temperatures when compared with the average temperature. A typical definition is a 3-month average warming of at least 0.5 Celsius in a specific area of the east-central tropical Pacific Ocean. Generally, this happens at irregular intervals from two to seven years, and lasts nine months to two years. The average period length is five years.

It is estimated that about 2.8 million people in the country are in need of food aid following last season’s dry spell and floods, according to a report by the Malawi Vulnerability Assessment Committee.

This situation could even become worse this year due to the weather. Furthermore, many households have failed to purchase fertiliser under the government’s Farm Input Subsidy Programme (FISP) following an increase in the price of the fertiliser. This has left the poor farmers even more vulnerable as they cannot afford to either re-plant their gardens or re-apply fertilizer when the rains eventually come.

The current economic status of high inflation and interest rates has further reduced people’s buying power. Most people are failing to buy a bag of maize which vendors are selling at between about 15 dollars and 18 dollars per 50kg bag. At the official government market Admarc, it is priced at about 16 cents a kilo.

“Vendors are now selling the maize at about 50 cents a kilo which is very high considering the number of people in my household. Even if I say I will buy at Admarc, I could not manage because of long queues. People are spending days and nights there to the point of just giving up and returning home empty handed,” lamented Mwandida Mojolo, a mother of four from Gojo Village in the Mulanje district, in the southern part of Malawi.

“We have now resorted to buying a walkman (about a kilo of maize flour bought in grocery shops) which is selling at 270 kwacha (about 50 cents). A few months ago it was better because then we could cook mangos and eat with our children before sending them off to school. But now the mangos are finished, we have nothing left. The children are refusing to go to school saying, mom how will I learn on an empty stomach,” she added.

Mojolo added that it is hard to find anyone needing help with their fields because with no rains there isn’t much to do in the gardens.

At the moment, organizations such as Food and Agriculture Organization (FAO) are working to help families transition from emergency and relief assistance.

“FAO Malawi is promoting improved cropping practices like conservation agriculture. This involves training not only farmers, but also extension workers who will continue to train farmers over the years, in good agricultural practices, integrated production and pest management and other new technologies. Farmers also receive high quality inputs to ensure they achieve better harvests,” according to a recent report of FAO.

Experts have since been urging the Malawi government to come up with an irrigation master plan which would ensure that farmers are producing crops all year round rather than waiting for the rains.

At the moment, authorities are yet to conduct an assessment of the crop damage according to Secretary for Agriculture, Erica Maganga. She however did not deny that the situation is bad.

“This is a serious issue that cuts across several sectors and requires consultations at all levels to decide on how we move forward as a country,” she told IPS.

Maganga is also quoted in a local newspaper as saying the government together with some non-governmental organizations has secured 2.5 million dollars under the Multi Donor Trust Fund where they are distributing sweet potato vines and cassava cuttings to people affected by last year’s flooding, while others are getting money.

She also said they had raised another 15 million dollars with agriculture cluster members for the distribution of maize seed and other dry resistant crops.

On Saturday January 10, President Peter Mutharika led Malawians in national prayers for the rains at a ceremony held in the capital, Lilongwe.