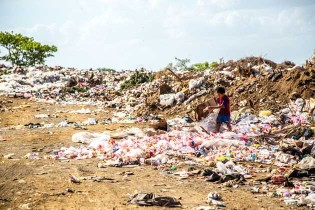 By Maged Srour
Soil pollution is posing a serious threat to our environment, to our sources of food and ultimately to our health. The Food and Agriculture Organization of the United Nations (FAO) warns that there is still a lack of awareness about the scale and severity of this threat.

By Orlando Milesi
Identifying territories where rural poverty is most entrenched in Latin America and the Caribbean to apply new tools and innovative policies to combat hunger is the new strategy that will be discussed at a ministerial meeting to be held in early March.

By Thalif Deen
The environmental challenges facing Bangladesh, described by the United Nations as one of the world’s “least developed countries” (LDCs), are monumental, including recurrent cyclones, perennial floods, widespread riverbank erosion and a potential sea level rise predicted to put about 27 million people at risk over the next two decades.

By Daniel Gutman
In and around the city of Rosario, where most of Argentina's soybean processing plants are concentrated, a local law banned the use of glyphosate, the most widely-used herbicide in Argentina. But two weeks later, producers managed to exert enough pressure to obtain a promise that the ban would be overturned.

By Baher Kamal
The growing resistance to antibiotics and other antimicrobials due to their overuse and misuse both in humans and animals has become an alarming global threat to public health, food safety and security, causing the deaths of 700,000 people each year. This is a fact.

By Baher Kamal
While trillions of dollars are being spent on exploring remote galaxies, Planet Earth is still home to harsh realities that could be easily –and much less expensively—resolved. One of them is that worldwide 152 million children are currently victims of child labour.

By Ivet González
Based on protein plants, pasture and fodder, Orlando Corrales produces cow and goat milk on a farm located next to a major road in the Cuban capital. "We do not use any industrial feed here," he says proudly.
Next Page »