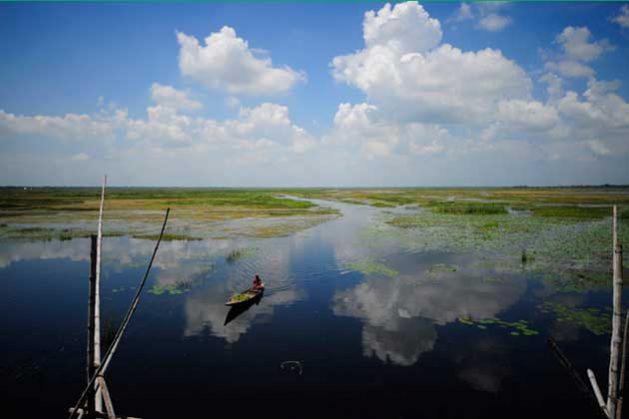 UNITED NATIONS, Dec 13 2017 (IPS) - The environmental challenges facing Bangladesh, described by the United Nations as one of the world’s “least developed countries” (LDCs), are monumental, including recurrent cyclones, perennial floods, widespread riverbank erosion and a potential sea level rise predicted to put about 27 million people at risk over the next two decades.

But the first National Country Investment Plan for Environment, Forestry and Climate Change (CIP-EFCC), released December 13, provides a detailed road map for sustainable development that encompasses reduction in poverty, improving environmental and human health benefits and increasing resilience to climate change, among others.

Prime Minister Sheikh Hasina, herself with strong environmental credentials, has endorsed the plan ratified at the highest levels of the National Environmental Council, pointing the way for other developing countries to emulate and follow in the footsteps on Bangladesh.

Described as a “strategic tool,” the plan is anchored to, and aligned with, the vision of transforming Bangladesh from a LDC to a middle income country by 2021, nine years ahead of the UN’s targeted date of 2030 to achieve its Sustainable Development Goals (SDGs).

The plan, which will enable Bangladesh to monitor and assess the state of the environment, as well as investments in the context of climate change, also provides an avenue for multi sector policy dialogue and coordination for investment in CIP-EFCC – where state agencies, private sector, and civil society are able to advance areas of common interest, including in the forestry and timber sector.

Marco Boscolo, Forestry Officer at the Food and Agriculture Organzation of the United Nations, and former Chief Technical Advisor of the project, told IPS that it was hard to underestimate the size of environmental challenges of Bangladesh.

“Every year, only due to riverbank erosion, tens of thousands of people lose their land and livelihoods, spurring a lot of internal migration, mostly towards cities. Landslides, cyclones and floods make headlines every year during the monsoon season,” he said.

The reasons are complex. Flooding is not a new phenomenon in Bangladesh. Because the country is a flat delta, the monsoon season has always brought some level of flooding. However, climate change (more severe storms and cyclones) and trans-boundary water issues have exacerbated the problem, said Boscolo.

“The pressure on the land is huge. To get a sense of the level of population pressure in Bangladesh one can imagine that, if the whole population of the earth (about 7.6 billion) would be put all in the USA, the population density would be less than what is now in Bangladesh,” he declared.

Asked what Bangladesh needs to implement the SDGs, and also battle natural disasters, Boscolo said that with the adoption of SDGs, countries have sanctioned that most development challenges are cross-sectoral in nature.

Addressing the threat of climate change, tackling poverty and food security, addressing environmental degradation are not and cannot be the exclusive mandate of individual ministries and agencies, he pointed out.

“Unfortunately, in Bangladesh (as in many other countries), there is still a strong sectoral divide in terms of both structure, planning and budgeting which deters coordination and learning. Cross sectoral investment frameworks are essential to implement the SDGs.”

He said the Country Investment Plan (CIP) on the environment, forestry and climate change includes about 30 SDG indicators in its results framework.

Meanwhile, facts and figures on the state of the country’s environment are staggering: about 15 million people in Bangladesh alone could be on the move by 2050 because of climate change induced sea level increases and increases in areas under standing flood water.

At the same time, saline intrusion (up to 8 km by 2030) resulting from sea level rise will create a significant reduction in agriculture productivity. https://cgspace.cgiar.org/bitstream/handle/10568/83337/CSA_Profile_Bangladesh.pdf?sequence=2&isAllowed=y

Temperature increases are already having a negative effect on yield of rice and other vegetable crops. By 2050 pulse yields under climate change are 8.8% lower than the projected value if climate change did not occur.

Additionally, extreme weather conditions (floods and cyclones) are expected to increase in frequency and intensity in Bangladesh. Losses related to the 2007 and 2009 cyclones were estimated at around two million metric tons of rice, enough to feed 10 million people.

Pollution can account for as many as one in four deaths. Extremely poor air quality, polluted food and water systems and industrial toxins all contribute to this scenario. http://www.dhakatribune.com/bangladesh/environment/2017/10/20/pollution-can-account-one-four-deaths-bangladesh/

Asked about the importance of the CIP, Boscolo told IPS the five year CIP, which took two years to develop, responds to a growing need for an investment framework that allows for resources to be more targeted for environmental improvements, better coordination among agencies, and regular monitoring of the impacts of these investments.

He said the CIP had been designed to help the Government realize its policy objectives by guiding investment choices in their Annual Development Programs.

The plan has identified at least 46 agencies that implement 170 projects directly related to the environment, forestry and climate change. While those projects are worth some $5.0 billion, an additional $7.0 billion are needed by 2021 to meet development targets, such as those set in the Government’s seventh Five Year Plan.

Areas such as environmental governance, pollution control, and the management of natural resources were found to be particularly underfinanced, he noted.

“These additional investments are needed to ensure that the country’s economic development, which has progressed at a rate of over six percent per year, will continue and to ensure the health and well-being of the general public while safeguarding the environment,” Boscolo added. http://www.bd.undp.org/content/bangladesh/en/home/library/crisis_prevention_and_recovery/climate-protection-and-development-budget-report-2017-18–.html

Asked what is urgently needed to help implement the SDGs, Boscolo said improved targeting of climate change (CC) and environmental funds to activities that will have the greatest effect in mitigating the effects of CC and improving the environment.

In particular, he said, there is a need for capacity enhancement within relevant organizations (e.g., General Economics Division, Planning Commission, Prime Minister’s Office’s relevant directorate and ministries like agriculture, disaster management, water resources etc.) which might be helpful.