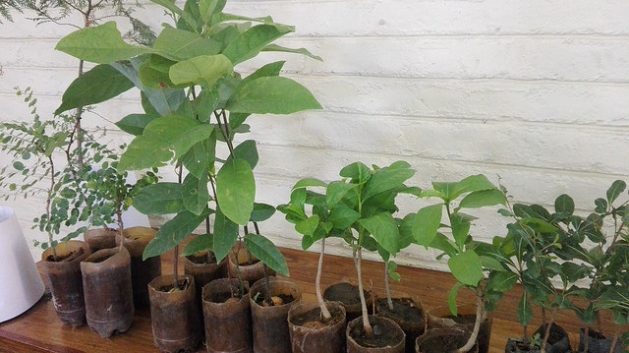 Tree seedlings at a nursery in Zambia, where charcoal production is worsening deforestation. Credit: Friday Phiri/IPS

CHOMA, Zambia, Dec 18 2017 (IPS) - “We have various financial obligations that push us to charcoal making. Top on the list is farming inputs and school fees,” explains Arclay Moonga, a charcoal producer and chairperson of the recently formed Choma District Charcoal Association in Southern Zambia.

His statement validates a popular belief among the locals here that charcoal is their own version of Automated Teller Machines, or ATMs.

In a society where charcoal production and the associated trade are mostly illegal, organising producer and trader groups has proven challenging.

Due to high demand, charcoal offers guaranteed cash income, adds 47-year-old Moonga. According to the Food and Agriculture Organisation of the United Nations (FAO) Forestry and Farm Facility (FFF) programme, this belief captures one of the main challenges to forests in Zambia, where small-scale farmers and charcoal producers have long been seen as the main reasons behind the country’s increasing deforestation and forest degradation problems.

In a country where forest land accounts for 59 percent of the total area, boasting at least 220 tree species, containing 3,178 million square meters as growing stock, 2.74 billion tons of biomass, and 1.34 billion tons of carbon, the deforestation rate is alarmingly high, currently at 276,021 hectares per year.

Based on the results from the Integrated Land Use Assessment (ILLUA II), Southern province is ranked the third least forested and regenerated area after the Copperbelt and Lusaka. The resultant effects of forest loss have impacted negatively on livelihoods.

“You may agree with me that some experiences like having some rivers that flowed throughout the year becoming seasonal, depletion of firewood sources in nearby places and water shortages are a common challenge causing some women to travel long distances to fetch these basic requirements for domestic use,” observed Daglous Ngimbu, Deputy Permanent Secretary for Southern Province.

Ngimbu told IPS that government is concerned that a province known for its contribution to agriculture is witnessing increased charcoal production, with a worrying trend where even food tree species such as Uapaka Kirkiana, locally known as Masuku, are not being spared by charcoal producers.

These are some of the key challenges that the FFF programme is addressing. A partnership launched in September 2012 between FAO, IIED and IUCN, and AgriCord, its Steering Committee is formed by members affiliated with forest producers, community forestry, indigenous peoples’ organizations, the international research community, business development service provider organizations, private sector, government, and donors.

In addressing the challenges, the FFF is using a unique approach—encouraging sustainable production of charcoal through increased support for collaboration between the Forest Department and the agricultural sector to improve smallholder producer organisations’ technical capacity, and strengthening of enterprise development.

But in a society where charcoal production and the associated trade are mostly illegal, organising producer and trader groups has proven challenging.

“I am reliably informed that it was not easy to bring charcoal producers together and start working with the forest department on various initiatives,” said FAO Country Representative, George Okech during a signing ceremony of a 15,000-dollar grant with the first ever Charcoal Association in Zambia—Choma Charcoal Association, comprising producers, transporters and traders among other stakeholders.

“The Forest and Farm Facility programme believes that organising the producers into groups is the first step to build capacity for sustainable utilisation of forest resources and improve business opportunities for the rural poor people who depend on these forests resources for their lives,” Okech said.

The grant is meant to support the Association in mobilisation of charcoal producers and institutional growth, demonstration of low cost and efficient technologies to produce charcoal that reduce waste of forest materials and to increase participation of members in sustainable forest management activities.

As a platform for capacity building and policy dialogue, Okech said the Charcoal Association is receiving additional support through the Forest Department, which has been given 52,960 dollars for tree nursery growers and other women’s groups related to basket-making activities.

For long-term policy support, “FAO through this facility has also supported the Forest department to develop a new charcoal regulation which is in draft, that will require charcoal producers to form Associations before licenses are provided,” he told IPS.

Interestingly, this bottom-up approach has brought on board and improved key stakeholders’ participation at the local level—the local councils and traditional leadership. The formation of the Charcoal Association was debated and voted for in the full council meeting, giving a voice to the otherwise voiceless charcoal business players.

With this development, their views will now be carried along all the way through to the highest national development decision-making level and mainstreamed into policies and implementation strategies.

“While the people of Choma largely depend on agriculture for livelihoods, the council is aware of climate change which is having a negative impact on agriculture, and we are alive to the fact that forests play a key role in the whole ecosystem,” noted Javen Simoloka, Mayor of Choma municipality.

“That’s why the full council voted for the formation of the Charcoal Association to strengthen community participation and ensure that their views are carried along in the management of forest resources.”

When His Royal Highness Chief Cooma heard this idea for the first time, his initial reaction was skepticism.

“I have a strict policy on conservation of forests in my chiefdom, regulating tree-cutting activities. Therefore, I was worried to hear that higher authorities had allowed for the formation of such a charcoal Association, which to me, was like giving a license for destruction of trees,” he said.

“But I am grateful that Charcoal Associations are not about indiscriminate cutting of trees,” he added with a sigh of relief, as he showcased portions of an indigenous regenerated and exotic forest reserve surrounding his palace.

It is also a relief for Moonga. “Even when we dully paid for licenses, we usually stayed away from government activities out of fear. Most of our members would move their products in the night just because of the perception that all charcoal trading was illegal,” lamented Moonga.

“But now I know that we have been empowered. Personally, as a producer for over 20 years, no one can intimidate me on prices anymore, I am free to bargain with traders and sell publicly as opposed to the past when I would sometimes be forced to sale at give-away prices for fear of being caught by authorities.”

For a country where over 70 percent of the population depends on biomass energy – charcoal and wood fuel – adopting such a community-friendly approach to forest management, formalizing what has over the years been considered illegal, could prove to be the difference between environmental degradation and sustainability.