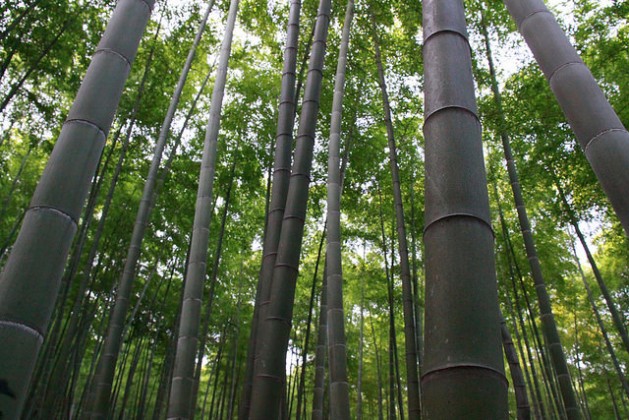 Bamboo sequesters carbon at rates comparable to or greater than many tree species. Credit: Desmond Brown/IPS

KINGSTON, Jamaica, Apr 24 2017 (IPS) - Keen to tap its natural resources as a way to boost its struggling economy, Guyana struck a multi-million-dollar deal with Norway in 2009.

Under the deal, Norway agreed to pay up to 250 million dollars over five years, if Guyana, a Caribbean Community (CARICOM) country in South America, maintained a low deforestation rate.

"It is a plant, it does photosynthesis, but it happens to be the fastest growing plant in the world so the absorption of CO2 by bamboo forests is quite significant.” --Dr. Hans Friederich

It was the first time a developed country, conscious of its own carbon-dioxide emissions, had paid a developing country to keep its trees in the ground.

The initiative was developed by the United Nations and called REDD+ (for Reducing Emissions from Deforestation and Forest Degradation plus conservation).

The main aim was to allow for carbon sequestration – the process involved in carbon capture and the long-term storage of atmospheric carbon dioxide.

Trees are thirsty for the potent greenhouse gas carbon dioxide, soaking it up during photosynthesis and storing it in their roots, branches and leaves. Each year, forests around the world absorb nearly 40 percent of all the carbon dioxide produced globally from fossil-fuel emissions. But deforestation increases the amount of carbon dioxide in the atmosphere as trees are burned or start to decompose.

Most of the other Caribbean countries do not have the vast forests present in Guyana, but one expert believes there is still a huge potential to sequester carbon.

While the bamboo plant can be found in abundance in several Caribbean countries, the director of the International Network for Bamboo and Rattan (INBAR), Dr. Hans Friederich, said its importance and the possible role it could play in dealing with climate change have been missed by many of these countries.

“Bamboo and rattan, to a lesser extent, have been in a way forgotten as mechanisms that can help countries both with mitigation of climate change and with adaptation. And I think, certainly for the Caribbean, for Jamaica, both aspects are important,” Friederich told IPS.

“Mitigation, because carbon is sequestered by bamboo. It is a plant, it does photosynthesis, but it happens to be the fastest growing plant in the world so the absorption of CO2 by bamboo forests is quite significant.”

“The stems are thin but, over a period of time, the total sink of CO2 from a bamboo forest is actually more than the average from other forests. We’ve tried this, we’ve tested this and we’ve measured this in China and that’s certainly the case over there,” he added.

As far as adaptation is concerned, Friederich said bamboo also has a key role to play.

“For example, helping local communities deal with the effects of climate change in relation to erosion control, in relation to providing income in times when maybe other sources of income are no longer there or have been affected through floods or droughts or other environmental catastrophes,” the INBAR official explained.

“So, bamboo really is something that should be included in the overall discussion about climate change mitigation and adaptation.”

INBAR has facilitated a trip to China for a group of Jamaicans, to show them how the Chinese are using bamboo as a source of energy, as a charcoal source – to replicate that intelligence and that experience in Jamaica and help the island develop a bamboo industry.

In 2014, the Jamaica Bureau of Standards announced the country would embark on the large-scale production of bamboo for the construction of low-cost houses and value-added products such as furniture and charcoal for the export market.

The bureau also facilitated training exercises for people to be employed in the industry, and announced plans to set up three bamboo factories across the island.

The agency said it would also offer incentives for people to grow, preserve and harvest the bamboo plant for its various uses.

The following year, the bureau and the Small Business Association of Jamaica (SBAJ) collaborated to establish the country’s first ever Bamboo Industry Association (BIA).

The BIA’s mandate is to engage and heighten awareness among owners of properties with bamboo, about the potential economic values to be derived from the plant, of which there are more than 65,000 hectares of growing across the island.

“We believe in changing the nation…so we are here to make an impactful difference in the lives of the average citizen of this country,” SBAJ President Hugh Johnson said.

It seems the importance of bamboo might be slowly catching on in the Caribbean and elsewhere.

“Does it connect? It depends really with whom. I think our members, we now have 41 states that are part of the network of Inbar – they recognize it. And more and more do we get requests to help countries think about ways that we can develop the industry,” Friederich said.

“But beyond the people that understand bamboo there is still a lot of awareness raising to be done . . . to make people understand the opportunities and the benefits.

“The nice thing about bamboo is that the start of the production chain, the start of the value chain is something that basically involves unskilled, poor people. So, it is really a way to address Sustainable Development Goal (SDG) number one – poverty reduction and bringing people out of real bad conditions. Therefore, that is something that we are working our members to see how we can support local communities with activities that basically promote that,” he added.

INBAR is an intergovernmental organisation established in 1997 by treaty deposited with the United Nations and hosted in Beijing, China.

Friederich said reactions from the producing countries have been very positive.

“From the international community, equally, I think those working in forestry like the Food and Agriculture Organisation, they definitely see the opportunities,” he said.

“From the investment community, maybe less so. I think the banks and individual investors are still wondering what the return on investment is, but we do have some very interesting private sector reactions and there are some exciting things going on around the world. So, in general, I think the message is getting through,” Friederich added.