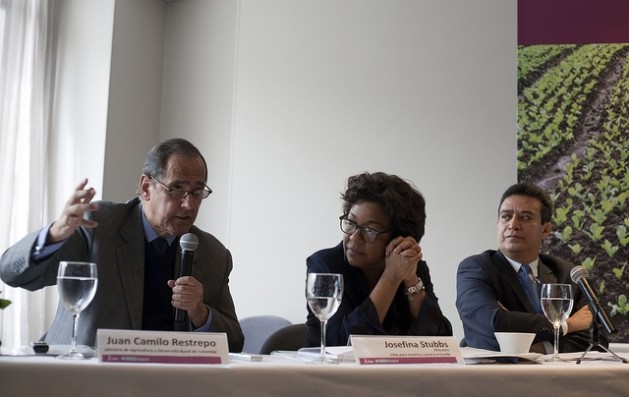 BOGOTA, Apr 25 2013 (IPS) - International Fund for Agricultural Development (IFAD) initiatives working to overcome poverty and improve food security in the Colombian countryside can make a positive contribution to government efforts to tackle some of the most neglected problems facing this South American country.

“Rural development was forgotten in Colombia for a long time,” Minister of Agriculture and Rural Development Juan Camilo Restrepo said at a seminar on Monday Apr. 22, organised by IFAD and his ministry to share experiences linking the situation in rural areas with peace efforts in this country that has seen nearly 50 years of armed conflict.

“That’s why we’re now making great efforts to give rural development pride of place. But there is a long way to go,” Restrepo admitted at the opening of the seminar on “Desarrollo rural y construcción de territorios dinámicos y pacíficos” (Rural development and construction of dynamic and peaceful territories).

Recent indicators show progress has been made against poverty, but it is still concentrated in the rural areas where one-third of Colombia’s 47 million people live.

According to figures released Apr. 18 by the National Administrative Department of Statistics, while the overall poverty rate declined from 40.3 percent in 2009 to 32.7 percent in 2012, the urban rate last year was 28.4 percent compared to 46.8 percent in rural areas.

“The country needs to work extremely hard to give rural areas the importance they deserve, with or without a peace accord,” said the minister, referring to the talks taking place in Havana between the government and the Revolutionary Armed Forces of Colombia (FARC) guerrillas, in which land reform is a key issue.

“The support we receive from IFAD, and events like this, contribute to increasing our resolve,” Restrepo said.

Josefina Stubbs, Latin America and Caribbean director of IFAD, said “Colombia today is at a crucial moment, redefining its frameworks, policies and laws for rural development.” That is why “this event is very important, as much for IFAD as for other development sectors here present,” she told IPS.

The Victims’ Law, in force since January 2012, provides for the restitution of lands taken by armed groups from campesinos or peasants and other people displaced by the conflict.

Another bill, the Law on Land and Rural Development, which Restrepo is promoting, is under consultation with indigenous and campesino communities before it is presented to Congress.

In this context, “strengthening dialogue with the Colombian government at this point is extremely important, because this country is trying to close the gaps of inequity and the large differences between urban and rural sectors, and very seriously re-thinking the processes of rural development in a way that would contribute effectively to poverty reduction,” said Stubbs.

IFAD’s experience in this field is vast. Through its Rural Opportunities Programme, shared with the government, “it has generated support covering 20,000 families and 400 businesses,” Roberto Haudry, IFAD country programme manager for Colombia and Peru, told IPS.

The Rural Opportunities Programme “is an off-shoot of another programme with which IFAD has contributed to public policies in Colombia through the strengthening of over 1,000 campesino enterprises involving some 120,000 families,” he added.

“The country is changing. It’s time to talk less theory and to put people to work with other people, with the state as a partner. We can have absolute confidence if small entrepreneurs are empowered to make changes in this country. Campesinos, young people and vulnerable sectors with a productive attitude will emerge from poverty under their own steam, with their own motivation and abilities, without intermediaries of any kind,” Haudry said.

This is what Teófila Betancourt has done. She is an Afro-descendant from Guapi, a small town on the Pacific ocean in the southwestern department of Cauca.

“We have worked for many years to improve people’s welfare, based on the recovery of traditional practices, food security, territorial solidarity and human rights, and we have made considerable progress,” she said.

There are 25 cooperatives in Guapi, with an average of 15 women each. They plant food crops for their own consumption, as well as aromatic and medicinal species, and they make jams, crafts and traditional musical instruments. They sell their produce in local markets and have gradually taken up the public space that had been occupied by vendors from other regions.

These producers have also opened a restaurant that promotes typical foods of the coastal region, and they offer accommodation to visitors.

Along the Pacific coast, there are 84 groups doing similar work. “We have been doing this for 22 years” and recently, “we have received support from IFAD through Fundación Acua (an Afro-descendants’ cultural organisation),” Betancourt said.

“They support us because they know what we contribute to the rural area of Guapi. And that’s why I’ve come here (to the seminar) today. Although I feel a bit like a fish out of water, I have learned that this is where we can find out exactly what the government is thinking and what it is doing,” she said.

Alex Segovia, technical secretary in the office of the president of El Salvador, described the experience of his country, where a 12-year civil war came to an end in 1992, and which is governed today by the Farabundo Martí National Liberation Front, the former guerrilla group that laid down its arms and took the path of electoral democracy.

“This debate is very important because rural development is combined with the urgent need for peace,” Miguel Fajardo, the head of the Centro de Estudios en Economía Solidaria (CEES – Centre for the Study of the Solidarity Economy), told IPS. He described the achievements of cooperativism in three provinces in the department of Santander, in the northeast of Colombia.

“There are signs of change linked to justice and land restitution in rural areas, and without a doubt minister Restrepo is presenting carefully thought-out reflections on issues that had practically vanished from the agenda over the past 20 years or more,” said Fajardo, a sociologist.

However, he expressed “uncertainty” about the advance of the mining industry in locations like Páramo de Santurbán, an area of rich biodiversity with a wealth of water resources, and in the region of Vélez, “which have been granted in concession to multinational corporations, with the result that the regions have become impoverished.”

Restrepo told IPS that “Colombia began a peace process in spite of ongoing armed conflict, which is not usual, but even within the conflict one must begin to think about what the post-conflict reality is going to be in every sense, and particularly in terms of rural development.

“Let us remember that real peace comes after an accord has been signed, when a country’s institutions achieve the administration of that peace and its adaptation to the times,” he said.