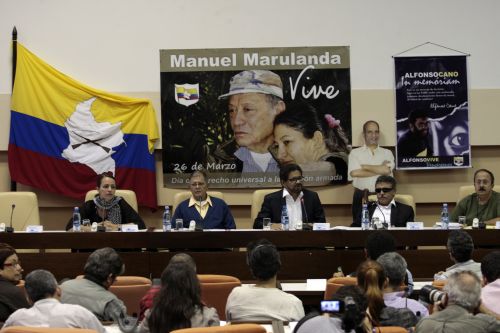 HAVANA, Nov 30 2012 (IPS) - The Colombian government and the FARC guerrillas will resume the peace talks in the Cuban capital on Dec. 5, in a climate of moderate optimism surrounding a process in which citizen participation could play a key role.

After 11 days of talks that started Nov. 19, the negotiators decided to take a brief recess for consultations and internal discussions on the issues being addressed, Humberto de la Calle, the head of the delegation of the government of Juan Manuel Santos, announced Thursday.

De la Calle broke the silence he has kept since arriving in Havana to say that so far the talks have been “advancing as expected.” He said the government puts “special importance on broad, pluralistic participation.”

Both the government and FARC (Revolutionary Armed Forces of Colombia) delegates agreed that the talks were going well.

The head of the rebel group’s delegation, Iván Márquez, said in a press conference that “the necessary steps and solutions have been taken” to begin discussing the first point on the agenda.

“In Colombia and around the world, people are clamouring for peace in our country. We are very optimistic,” said Ricardo Téllez, another FARC negotiator. He said “serious, profound” issues have been discussed, while adding that “there has also been room for laughter and jokes.”

“We have been building up trust, which is extremely important,” he said. “Don’t forget that these two sides are involved in a conflict that hasn’t ended yet…the FARC have declared a ceasefire, but the clashes continue.”

In Bogotá, President Santos has reiterated that the armed forces will not cease their actions against the guerrillas.

The results of the first stage of talks, which have been held behind closed doors in Havana’s Palacio de Convenciones, include plans for a Dec. 17-19 public forum on agricultural questions, and the creation of a web site and other mechanisms for people to set forth proposals regarding the points on the agenda.

The web site will begin to function on Dec. 7, when a broad information campaign will be launched on TV and radio and in the press, to invite people to send in their opinions, ideas and recommendations. A form will also be distributed, for people who prefer to send in a written suggestion, rather than participate on-line.

Analysts say the initiative to open up the talks to citizen participation represents a major stride forward in the talks that officially began on Oct. 18 in Oslo.

Norway and Cuba are guarantors of the negotiations, and Chile and Venezuela are observers. The talks will mainly be held in Havana, although some sessions could take place in other countries.

Mechanisms for public input were foreseen in the general agreement on the negotiations signed by the FARC and the Santos administration at the end of the preliminary talks, which took place in Havana from Feb. 23 to Aug. 26.

A joint communiqué issued by the two delegations says they asked the United Nations in Colombia and the National University’s Centre of Thinking and Follow-up to the Peace Talks to organise a public debate on a “policy of integral agrarian development”.

The U.N. and the National University centre are to report on the conclusions reached in the public debates to the negotiators on Jan. 8. De la Calle said the delegates also agreed to receive the results of forums organised by the congressional peace commissions, which had the support of the U.N. office in Bogotá.

“The aim is to get citizens and organisations from all sectors to set forth relevant, useful proposals in the debate on the agenda agreed in the general agreement on the talks. With this public input and the direct talks that we are holding, we hope to reach accords that will lead to the end of the conflict,” de la Calle added.

The FARC sees the public debate on agrarian policy as “a watershed” in the talks, because “we think it is a good time for the country to express its views,” Márquez told journalists.

“We want the people of Colombia to point out the route to peace,” he added.

A policy on integral agrarian development is the first item on the negotiators’ six-point agenda. The issue includes access to and use of land, unproductive rural property, formal land titling, the agricultural frontier and the protection of nature reserves, development programmes, and infrastructure.

FARC has repeatedly stated that the extreme concentration of land ownership in Colombia is the historical cause of the insurgent struggle.

The rebels are pressing for comprehensive land reform, which would include the confiscation of land to be distributed among landless farmers.

*With reporting by Ivet González