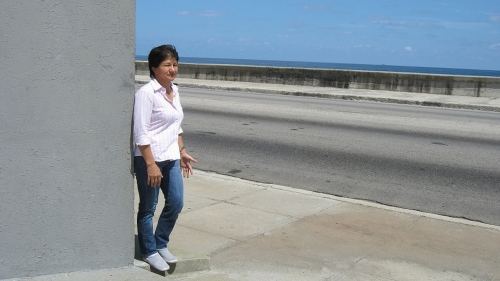 HAVANA, Sep 27 2012 (IPS) - It’s hard to imagine her in guerrilla fatigues, carrying a 25-kg backpack and firing shots to repel an enemy attack, or diving for cover from aerial bombardment. She is known as Sandra Ramírez, and she has left the field of battle in Colombia to come to the Cuban capital to talk peace.

So far she is the only publicly recognised woman to be involved in exploratory talks between delegates of the Revolutionary Armed Forces of Colombia (FARC) and the country’s government, headed by President Juan Manuel Santos, aimed at initiating dialogue for “the construction of a stable and lasting peace.”

When she arrived at the first press conference held in Havana in August by FARC representatives, not all the journalists knew who she was. But soon the news spread round the room that one of the initial negotiators was the partner of “Manuel Marulanda”, the nom de guerre of Pedro Antonio Marín, founder and leader of Latin America’s longest-lived guerrilla group.

One interpretation of her presence at the talks is the reaffirmation of the continuity of a process initiated by Marulanda, who died of a heart attack in March 2008, at the age of 77.

“What is present here is his legacy. During his 60 years of struggle, he was seeking a political solution to the conflict, and that has always been our aim,” Ramírez said in this exclusive interview with IPS.

“At Commander Marulanda’s side I learned to love this cause of ours, and the much greater commitment it implies. We worked together for many years and we shared so many things,” she said, her normally calm voice breaking.

Ramírez comes from a large peasant family. “We were 15 brothers and sisters and we had few opportunities in life, especially the girls.” She joined the guerrillas when she was 17. In May she turned 48, and she has no regrets about the path she chose. In the jungle she learned nursing and communications and she was a member of the corps guarding the FARC national directorate.

Apparently, that is how she became romantically involved with Marulanda, whom she accompanied and cared for in his last years.

Colombian journalists recall seeing her with him 10 years ago, at the peace talks between the FARC and the government of former president Andrés Pastrana (1998-2002) in the southern municipality of San Vicente del Caguán.

Q: Those talks failed. What are your expectations for the dialogue due to start in Oslo on Oct. 17, and to continue in Havana?

A: We are starting a new talks process to see if, with everybody’s efforts – those of the guerrillas, the government and the Colombian people – we can achieve a political solution to the conflict.

The endeavour has always had a chance of success, but the difficulty is that the Colombian oligarchy has always refused to give up a millimetre of its power, which it uses to shoot the opposition down.

Q: Do you think it is possible to hold peace talks without a ceasefire?

A: The government of Álvaro Uribe (2002-2010) exercised extreme violence and did not open its doors to peace. Now the correlation of forces is different, both within the country and in the broader Latin American context, with democratic governments in countries like Venezuela, Bolivia and Ecuador.

People in these societies are developing different forms of struggle, and this is having an effect on the people of Colombia. The decision is to sit down to talks, but logic and the scenario itself will determine whether or not there is a ceasefire, which would have to be bilateral if it is to occur.

Q: In the early 1990s, Cuban leader Fidel Castro, who led the armed insurrection that brought him to power in 1959, began to speak out against armed struggle and to recommend mass struggle, especially of “the people united, the people coordinated, the people struggling in the same direction.” What did you think of this statement?

A: Conditions in Colombia are very different. There is no freedom for political participation. The far right clings to power and physically eliminates its opponents; it has closed all avenues and left us no other option than to take up arms to make ourselves heard. Because that is what this is about: we take up arms in order to make ourselves heard.

Q: It is said that the FARC want to negotiate because they have been weakened.

A: The FARC have sought peace ever since they were founded, and this is a new opportunity. Of course, as an organisation facing all the latest technology provided by the United States, we cannot deny that we have been hit hard and lost valuable members. But that does not mean we are weakened.

Q: Do you think conditions are right for the Colombian people to support this process?

A: Yes, of course. This dialogue is supported by indigenous people, Afro-descendants, and every movement and social sector in the country. It is not a whim of the Santos government nor of the FARC.

Q: The agreements you regard as the road map for the peace talks do not mention the situation of women. Why is that?

A: The situation of women in Colombia is as difficult as that of all Colombian people – that is why it is not mentioned specifically.

Q: Around 40 percent of FARC troops are women; however, there are none in the organisation’s Secretariat.

A: According to our calculations, at the moment more than 40 percent are women. There are no women in the national directorate, but there are some in the Central High Command and intermediate echelons. And at company level, there are women in leadership positions.

Q: Women in Colombia, too, are subject to domestic violence and are discriminated against by machismo. Do these problems exist in the guerrilla?

A: Our organisation arose from Colombian society and is affected by these realities. But within it, women combatants are trained to express themselves, participate, take decisions and assert their rights. We have disciplinary regulations and fights are not allowed, let alone violence against women.

Q: Is it true that there are children among the guerrilla?

A: There have been exceptional cases with the children of guerrillas killed in combat. Sometimes their grandparents can’t look after them, and they are closely watched and pursued by the police or the army. Then there is no alternative but to take them with us. We give them an education, a combatant is designated to care for them, we try to give them the best possible care.

Q: What happens if the child wants to leave?

A: We analyse the situation. They generally choose to stay for security reasons. In many cases children have become excellent combatants, and even commanders.

Q: Is there any pressure or coercion on young people to join the guerrilla?

A: None at all. Entry is voluntary for everyone, men or women. The minimum age for entry to the FARC is 15.