Colombia’s Rebels Insist Peace Is Only Possible with Reforms 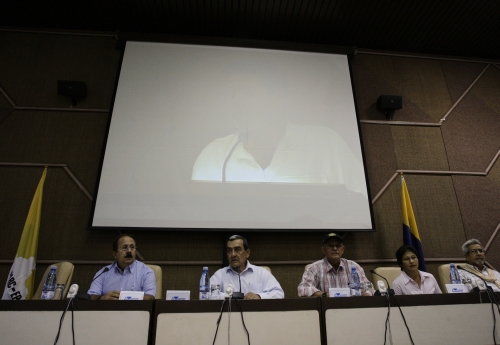 HAVANA/BOGOTA , Sep 5 2012 (IPS) - The Revolutionary Armed Forces of Colombia (FARC) are taking a pragmatic, reformist stance in the new attempt to negotiate a peace agreement with the Colombian government, to put an end to nearly half a century of civil war.

The priorities on the rebel group’s agenda include putting a curb on large-scale mining projects and infrastructure works like hydropower dams in rural areas, and measures for rural development.

In exchange, the FARC would lay down its arms.

On Tuesday, Colombian President Juan Manuel Santos, speaking from the presidential palace in Bogota, and FARC chief Timoleón Jiménez, in a video broadcast from Havana one hour later, formally announced that peace talks would start in October.

In Havana, the words of the rebel commander were listened to attentively by FARC members Marco León Calarcá, Andrés París, Mauricio Jaramillo, Ricardo Téllez, Sandra Ramírez and Hermes Aguilar, in the news briefing for Cuban reporters and foreign correspondents, where questions were not allowed.

The talks will begin in Oslo in the first half of October, before moving to Havana.

According to Tuesday’s announcement, the first item on the agenda is agricultural reform.

The terms of the agreement were distributed to the press after Jiménez’s videotaped speech, in which he said the Colombian government had repeatedly stated that there would be no ceasefire.

The rebel leader said the government, “in its strange point of view, sees any possibility of a ceasefire, truce, armistice or demilitarisation as only contributing to generating perverse incentives.”

He also said the guerrillas “have come to this new attempt at reconciliation besieged not only by the brunt of the military offensive unleashed a decade ago, but openly compelled, by its growth, to reduce our political and social aspirations in exchange for a miserable surrender,” he added.

Nevertheless, he said, “we hold the hope that the regime won’t try to repeat the same script of the past.”

This is the third attempt at peace talks between Colombian governments and the FARC, an insurgent force that has an army-like structure.

That round of talks gave rise to the Patriotic Union (UP), a left-wing party created as part of an agreement for the demobilisation and gradual reinsertion of the rebels in political life.

But the UP was systematically eliminated, with thousands of its members and supporters murdered.

The next peace process was initiated and ended by President Andrés Pastrana
(1998-2002). The talks were held in Caguán, a Switzerland-sized area in the south of the country from which military troops were temporarily withdrawn for the purpose.

After the talks collapsed, the United States got more heavily involved in Colombia’s counterinsurgency war.

The FARC maintain that peace is impossible without reforms, and that the reforms will emerge from the negotiations.

The insurgent group’s delegates to the talks “obey the decisions that are reached democratically in the secretariat” of the FARC’s central high command, a senior FARC commander stated in a private letter to which IPS had access on Monday Sept. 3.

The message adds that the rebel group will take part in the negotiations – which the participating parties say will continue uninterrupted until a peace deal is reached – as if they were “the most important of fights.”

The guerrilla leader also states that “on this side, everyone is ready” to engage in negotiations.

The National Liberation Army (ELN), a smaller rebel group, which like the FARC took up arms in 1964, has also said it is willing to sit down at the negotiating table.

The ELN has been seeking peace talks for years, but has failed to reach an understanding with any Colombian administration.

The letter seen by IPS says that at the root of the failure to reach an agreement to hold negotiations, as shown by previous exploratory talks, is the fact that the FARC considers that “peace will arrive together with changes, or it won’t arrive…it isn’t simply” a matter of laying down arms, synonymous with demobilisation.

On the contrary, for the elites, peace is synonymous with demobilisation, adds the source, a commander of FARC troops in a large region of Colombia, whose identity will be kept confidential.

The other side is lacking in “magnanimity,” he said. “When it comes right down to it, they won’t budge,” said the rebel leader, referring to the collapse of talks in Caguán.

The letter says the guerrillas will complain to Santos because he maintained the pro-mining policy of his predecessor, Álvaro Uribe (2002-2010). The rebel commander says drug trafficking money and the personal interests of the far-right ex-president – who is fervently opposed to the peace talks – come together in the mining industry.

At the negotiating table, the FARC will bring up the local conflicts generated by major infrastructure works, which are generally preceded by bloody operations of forced displacement of the local population, and which are opposed by the communities in the affected territories, the letter adds.

According to the agreement reached after exploratory talks held in Cuba from Feb. 23 to Aug. 26, the official negotiations will open in Oslo, but will be based in Havana, while meetings may also take place in other countries.

Previously, the two sides had held preliminary talks for a year and a half – a period during which top FARC commander Alfonso Cano was killed in combat, in November 2011.

Cano had been the chief FARC negotiator in the 1980s peace process that gave rise to the UP.

“We are looking at a real possibility” of an end to the conflict, although the road will be “difficult,” President Santos said.

Colombia and the world “have changed,” but this is also “a different accord,” Santos added.

Colombia is now the second-largest economy of South America, “millions of Colombians are leaving poverty behind,” and “the use of violence to achieve political objectives is a thing of the past,” and is not tolerated by any government in the region, he said.

The governments of Cuba and Venezuela, which publicly reject armed struggle, have played a key role in the preliminary talks.

Santos also said that “we can talk about peace thanks to the success of our armed forces and police.”

He stressed that military operations will not be suspended during the talks – an aspect that independent experts and the FARC see as the Achilles’ heel of the current peace effort.

“This is an agreement to end the conflict,” he insisted, although he warned that the success of the talks “must not be taken for granted.”

The talks “will be measured in months, not years,” Santos added, and the progress made will periodically be assessed. And if there is no progress, “we will not continue,” he stated.