BOGOTA, Jun 24 2010 (IPS) - Time does not heal everything. Finding the Colombian state guilty in the murder of Patriotic Union (UP) Senator Manuel Cepeda, the Inter-American Court of Human Rights considered the 16 years of impunity enjoyed by the masterminds behind the killing an aggravating factor. 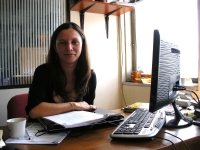 Jomary Ortegón of the José Alvear Restrepo Lawyers Collective, which represented the family of Manuel Cepeda before the Inter-American Court. Credit: Constanza Vieira/IPS

The sentence, issued on May 26 and published Jun. 23 on the web site of the Inter-American Court, is the Court’s first decision involving the extermination of the UP, a left-wing party that emerged from the peace agreement reached by the government of Belisario Betancur (1982-1986) and the Revolutionary Armed Forces of Colombia (FARC).

Under the 1984 peace deal, the guerrillas were to participate in political life through the UP, seeking political and institutional reforms through peaceful channels.

The UP was founded in May 1985, with government support. The Communist Party, of which Cepeda was one of the leaders, formed part of the new political force.

Cepeda was also a journalist, heading the Communist Party newspaper Voz for 18 years.

The day he was killed, Aug. 9, 1994, the senator was on his way to Congress when his car was cut off by gunmen in another vehicle. At least two army sergeants, who were later convicted, were involved in the assassination.

The UP was physically eliminated, with over 5,000 of its leaders and supporters killed. It shrank so much that it finally lost its status as a political party.

The Inter-American Court did not accept the plaintiffs’ claim to Cepeda’s seat in Congress, which would have marked the UP’s return to the legislature. In the meantime, the collective case of the UP is still making its way through the Inter-American human rights justice system.

But the binding Court ruling on Cepeda’s death set an important legal precedent.

IPS asked the legal representative of the victims, Jomary Ortegón of the José Alvear Restrepo Lawyers Collective, a prominent local human rights group, to discuss the significance of the 112-page Court ruling.

“It is a long-term contribution by the Inter-American system of justice with regard to the guidelines that must be followed in cases of crimes that constitute systematic persecution,” she said.

The Court considered Cepeda’s assassination to form part of the systematic destruction of the UP. No matter how obvious that might have been, it was a debate raised by the legal representatives of the Colombian state in their attempt to keep the murder from being classified as a crime against humanity.

The assassination is linked “to other cases in a similar situation, such as the murders, threats and harassment of other leaders, representatives and even presidential candidates of the UP,” reads the sentence, which is available only in Spanish.

In other words, failing to see the forest for the trees is a formula for impunity.

In the Colombian justice system, “one of the main weaknesses is that crimes are investigated in an isolated manner,” Ortegón said. “In the case of an organisation that has faced systematic persecution, the attorney general’s office opens 20 different legal proceedings, one for each threat received by the organisation.”

The impunity surrounding Cepeda’s killing was “favoured and tolerated by the various investigations that have been neither coherent among themselves nor sufficient to duly clarify the facts,” says the Court sentence with regard to the criminal investigation, disciplinary proceedings and two administrative legal cases carried out in Colombia regarding the senator’s murder.

Another concept expressed in the Court sentence is that the investigation must focus on everyone involved, not just the people who actually pulled the trigger.

“In this case, all levels of responsibility must be investigated: the planning, the execution, and also who benefited from the murder. This is a long-standing demand of the victims, and the Court acknowledges it,” Ortegón said.

The Court dismissed the government’s argument that the killings of the members of the UP occurred in a context of widespread violence linked to the drug trade, and that the state was not responsible.

The attacks on the UP cannot simply be blamed on “private agents,” but on various levels of an organised power structure made up of paramilitary and state forces, “and undoubtedly regional politicians who benefited as well,” the human rights activist said.

The Colombian justice system has not yet ventured to carry out a deeper investigation into the complex case of the UP.

Citing decisions and statements by Colombia’s Constitutional Court and ombudsman’s office, and by the United Nations, the Inter-American Court concluded in its ruling that the violence against the UP was systematic.

According to former ombudsman Eduardo Cifuentes, members of the UP represented, on average, 40 percent of all murder victims in Colombia between 1984 and 1994, and nearly 60 percent in 1986 and 1987.

The vulnerability of the UP and leaders like Cepeda was accentuated by the view that any opponent of the government was an “internal enemy, under the ‘national security’ doctrine,” the Court ruling says.

During those years, senior government and military officials often referred to the UP as the “political arm” of the FARC, aggravating the stigma associated with the party.

The Court stated that alleged links to the FARC were no excuse or explanation for the murders of the UP members.

The UP leadership had the protection of precautionary measures granted by the Inter-American human rights system. All of the country’s regional and national authorities were fully aware of the risks faced by the party’s members and even supporters.

The Court criticised Colombia for failing, until 2009, to launch an investigation into the existence of multiple, successive plans to eliminate the UP.

Ortegón said the 15-year delay, in and of itself, led to responsibility for the failure to protect life and provide judicial safeguards.

With respect to the sentence, she said “the Inter-American Court has left the door open to possible future decisions regarding the existence of crimes against humanity, such as in the case of the UP in Colombia.”

The Court ordered the Colombian government to ensure that a thorough investigation is carried out into Cepeda’s murder, and that all those responsible are brought to justice.

It also ordered protection and medical and psychological assistance for Cepeda’s family; a public ceremony in which the state acknowledges its responsibility for the murder; the preparation of a publication and documentary on Cepeda’s life; and 380,000 dollars in reparations to his family.