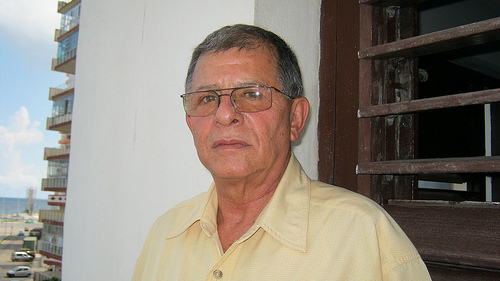 Rodrigo Granda, alias Ricardo Téllez, is one of the FARC’s leading negotiators in the peace talks. Credit: Patricia Grogg/IPS

HAVANA, Oct 15 2012 (IPS) - As peace talks between the Colombian government and the FARC guerrillas are about to start in Oslo, the possible participation of rebel leader Simón Trinidad, in prison in the United States, has not yet been decided.

Colombian Justice Minister Ruth Stella Correa said last week in Bogotá that Trinidad’s “virtual participation” in the negotiations set to begin Wednesday Oct. 17 is “legally feasible,” although it is up to the U.S. authorities.

Trinidad, the nom de guerre of Ricardo Palmera, has been serving a 60-year sentence since 2005 on charges of conspiracy and kidnapping of U.S. citizens.

The United States should allow Trinidad to travel to Oslo and then to Havana, where the peace talks will continue, because he is deeply familiar with the situation in Colombia, another insurgent leader, Rodrigo Granda, told IPS in this interview in the Cuban capital.*

Granda, alias Ricardo Téllez, is in Havana as a member of the FARC (Revolutionary Armed Forces of Colombia) negotiating committee.

Q: Is Trinidad’s participation at the negotiating table a condition for the talks? What will the FARC do if he is not allowed to take part?

A: Simón will be in the talks no matter what. His spot at the table will be marked with his name. Because he is one of the 10 members of the negotiating group – and one of the key negotiators.

The government of Juan Manuel Santos has named its 10-member team, and we have not questioned any of their choices. We hope Santos will live up to what was stated: that the FARC commission would be complete, without any limitations set.

Q: Do you believe that Washington should also sit down at the negotiating table?

A: The FARC are not enemies of the people of the United States. But that country has provided 12 billion dollars for this cruel war in Colombia. That is, it is part of the internal conflict, and its presence at the negotiating table would be a big help. We are not opposed to that.

It would also be helpful if the United States recognised that Simón Trinidad is a political prisoner, and allowed him to go to Oslo and then to Havana, to contribute to the Colombian peace process in person.

We Colombians cannot afford to do without a man who is completely familiar with the problems in the country, who has a great deal to contribute to this process. The Americans know him and know that he is deeply familiar with the situation in Colombia.

Q: What do people expect from the peace talks that will begin in Oslo?

A: We mustn’t get our hopes up too high. We will get to know each other; we are two enemies who in many cases will be seeing each other face to face for the first time. We’ll have to start out by building trust. We will undoubtedly clarify some questions about how the talks will work – rules, places, schedules, but nothing of great significance.

The talks will continue in Havana a few weeks after they begin (in Oslo), and then the serious, in-depth analysis of the points mentioned in the “General Agreement for the Termination of the Conflict and the Construction of a Stable and Lasting Peace” will begin.

Q: The agrarian question appears to be a key point for the FARC. Why is that?

A: Colombia is the only country in Latin America that has not carried out an agrarian reform process, and there are “latifundio” (large landed estates) of up to 100,000 hectares, while 87 percent of the peasants have no land.

We are talking about a comprehensive land reform process, involving the confiscation of land for its distribution among those who want and can work it.

At the same time, the government says it has a project for the integral development of the countryside.

We will bring our positions closer together. All of the points to be discussed are important. We are going in with an open mind, to address all of the problems, no matter how painful they are, and seek solutions to them.

Q: Do you agree with those who maintain that this is the last chance for peace?

A: There will always be opportunities for peace in any conflict in the world, and Colombia is no exception. The thing is that now there are factors that increase the sense of optimism that at last an agreement can be found through dialogue.

I have the impression that at this moment, the government is being realistic. They know that they cannot defeat the guerrillas by military means.

The dialogue process will have problems and ups and downs that will have to be overcome with dedication, taking into account the supreme interest of peace for Colombia. It is the FARC’s big contribution to our country and to the revolutionaries of Latin America.

We believe that even today our struggle is fully justified. If the situation changes, we also change.

Q: The regional context does not favour armed struggle. Why does the FARC insist on this kind of struggle?

A: In the specific case of Colombia, all of the factors that gave rise to the armed struggle remain in place. That there is now a president who wants to stop, study these causes and put an end to it, is something else.

(Santos) sees the FARC as a valid interlocutor, that tells him: “if you attack and dismantle these factors that have led to the armed struggle, we can stop and shift to another form of struggle that would be open, legal and political.” A stable, long-lasting peace treaty will take time to achieve.

We want to stop the war, although the mentality of the government and the high military command is aimed at the physical elimination of the insurgency, and in that effort they are using every form of fighting. They have dealt us a blow, but we have dealt them a blow too. You could say we are in a military deadlock that makes it necessary to find a political solution.

Q: Recently, the Secretariat of the FARC and the Central Command of the National Liberation Army (ELN) met. Was any idea about the participation of that other Colombian guerrilla group defined?

A: No. However, in the accord signed with the government, it was stated that other guerrilla organisations could support, initiate or contribute to the peace process.

Each guerrilla organisation is sovereign, and the ELN has stupendous people, very intelligent. Undoubtedly they will try to take from this experience what can work for them.

We believe they have are very willing to work for peace in Colombia. Gabino (Nicolás Rodríguez Bautista, the head of the ELN Central Command) has publicly expressed that.

We are very optimistic that the ELN could launch a process similar to ours.

A: At this point, our process with the government is quite advanced. The government and the ELN are apparently just starting to make a series of contacts.

In this sense, whatever could be and is in the hands of the FARC to help clarify things for our compañeros in the ELN, we are willing to facilitate all of the information that we have and to share the experience that we have accumulated in these months of discreet secret meetings in Havana.