Colombia to Seek Its Own Oslo Accord 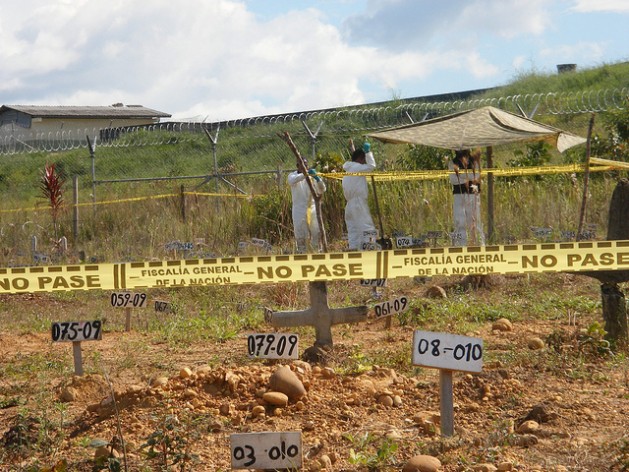 Technical experts from the prosecutor's office working in a cemetery in La Macarena, in central Colombia, full of unmarked tombs of the “disappeared”, some of the thousands of victims of Colombia’s civil war. Credit: Constanza Vieira/IPS

BOGOTA, Aug 29 2012 (IPS) - The Colombian government and FARC rebels will start formal peace talks in Oslo on Oct. 5, in an attempt to put an end to an armed conflict that has gone through different stages since 1946, with brief lulls.

The text of the agreement signed in Havana has not yet been divulged. But it reportedly contains a clause stating that neither party will withdraw from the negotiating table until a final peace deal is reached.

President Juan Manuel Santos decided to cut short the rumours in the local press, and announced Monday that “exploratory talks” had been held and that “in the next few days the results of the contacts with the FARC (Armed Revolutionary Forces of Colombia) will be made public.”

He said there were three “guiding principles” in the talks. “First: we are going to learn from the mistakes of the past, in order to avoid repeating them. Second: any process has to lead to the end of the conflict, not to its prolongation.

“Third: military operations and a military presence will be maintained in every centimetre of the national territory,” he added – raising questions with respect to speculation about a possible bilateral ceasefire as of October, or at least within the next six months.

The contacts apparently began at an informal level a year and a half ago, and moved into a phase of greater commitment, but still in secrecy, in May, according to the news director of the Venezuela-based Telesur TV network, Colombian journalist Jorge Enrique Botero.

According to Canal Capital, a Bogota public TV station, more than 30 meetings have already been held, in Colombia and abroad.

IPS was able to confirm that a member of the FARC high command took part in the meetings – physician Jaime Alberto Parra, whose nom de guerre is Mauricio Jaramillo. He currently commands the eastern bloc of the rebel group.

Different sources have also confirmed that conservative President Santos was represented in the secret preliminary talks by his brother, journalist Enrique Santos, former president of the Inter-American Press Association, and director of El Tiempo, Colombia’s leading daily newspaper, from 1999 to 2009.

On the government side, the contacts have been led by the president’s senior security adviser Sergio Jaramillo and Environment Minister Frank Pearl – both former officials under the government of right-wing President Álvaro Uribe (2002-2010), who is now an outspoken critic of the government and of the talks.

Between one and three retired generals also reportedly took part in the preliminary talks.

Botero confirmed what British correspondent Karl Penhaul told the W Radio station on Aug. 1, when he revealed meetings between the government and the FARC in Cuba.

According to Penhaul, when President Santos visited Havana, supposedly to wish his Venezuelan counterpart Hugo Chávez a speedy recovery after surgery for cancer, he met with FARC emissaries.

“Guerrilla sources…told me that the president himself (Santos) met with guerrilla commanders in Cuba to explore the possibility of talks,” the British reporter said.

In late July, Penhaul published a videotaped interview with Benito Cabrera, alias Fabián Ramírez, a commander of the powerful Southern Bloc of the FARC who had been reported as killed by the army.

Penhaul said at the time that the positions of the government and the communist guerrillas were “very distant from each other.”

Two recent surveys by the Fundación Ideas para la Paz (FiP), an independent non-profit think tank founded by a group of Colombian entrepreneurs, said a successful military solution to the civil war was unlikely, and the armed forces’ offensive was seen as a tactic to force the FARC, the country’s main rebel group, to the negotiating table.

But in the last three years, support for the use of military force rose from 28 to 37.3 percent among those surveyed, while preference for a negotiated solution dropped from 67.1 to 54.6 percent. Backing for a combination of the two strategies went up from 4.9 to 8.2 percent in the same period.

Another reporter, former vice president Francisco Santos (the president’s cousin), who is now his opponent and works in the RCN Radio station, said that “it all started” in the Colombian city of Santa Marta in August 2010, in a meeting of reconciliation between the left-wing Chávez and Santos, who had just taken office.

According to an IPS source close to the FARC, who will remain anonymous for security reasons, it is not true that Chile and Spain are among the facilitators of the peace talks, although Venezuela, Cuba and Norway are. The latter hosted the talks between Palestinians and Israel that gave rise to the 1993 Oslo Accords.

A prominent Norwegian figure reportedly took part in the preliminary talks from the start, but the identity of that individual has not been revealed.

RCN Radio said the government itself has been leaking details of the negotiations to begin acclimating the highly polarised Colombian public to the idea of peace talks.

The negotiations will be held behind closed doors, although they will take into account proposals and input from the citizens, and the negotiating table will issue joint reports, RCN Radio reported.

In late July, President Santos said the conditions were not in place to sit down to talks with the FARC.

However, the Caracol Radio station reported that four months ago, the president began to hold discussions with generals and colonels, to convince them that peace was possible.

In addition, two weeks ago, meetings were stepped up with the different parties in Congress to create regulations for some aspects of the so-called “legal framework for peace,” approved in June, which will apparently provide the guidelines for the negotiations with the guerrillas.

The military argue that the legal framework has gaps. But the controversial law reportedly did not please the FARC either.

A regional commander whose nom de guerre is Pablo Catatumbo, who heads rebel forces in western and southwestern Colombia, said in a letter read by IPS that the legal framework “runs counter to peace.”

The legal framework, added Catatumbo, “is more oriented towards including in the processes of impunity those who were left out of the earlier legislation: the ‘parapoliticians’ and the army.”

The “parapoliticians” have ties to the far-right paramilitaries and have formed part of their strategy of terror, which has killed and “disappeared” thousands of peasants and forced millions to flee their rural homes.

When “just one of the sides” draws up a framework of this kind, “it is to favour its allies,” not to achieve peace with the other side, the letter says.

In the letter, dated in July, Catatumbo also mentioned that the FARC have suggested that the United States be included in the talks, since it is the country that finances the war and sells Colombia most of its weapons.