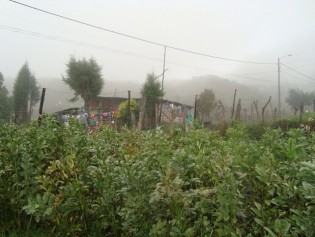 By Helda Martínez
An ambitious programme of infrastructure works to overcome the risks of climate change in Cartagena de Indias, a city on the Caribbean coast in northern Colombia, has generated controversy, with authorities predicting benefits while parts of the affected population voice criticisms.

By Helda Martínez
Nobody will ever know if Jhon Jairo Echenique decided to take his own life out of remorse, fear or mental illness. But the suicide followed his arrest for the stabbing and burning with acid of his 19-year-old former girlfriend Angélica Gutiérrez.

By Helda Martínez
The entry into force of Colombia’s free trade agreement with the United States was met by student protests and opposition from a segment of the business community, small farmers, and trade unionists.

By Helda Martínez
"In the Andes, and all over the world, mining on mountains should be banned. Distinguished scientists and papers in the most prestigious journals are saying this," a regional planning expert in Colombia told IPS.

By Helda Martínez
The human rights situation in Colombia is extremely serious, and getting worse, reported an International Verification Mission made up of 40 delegates from 15 countries who visited the country this week.

By Helda Martínez
The "occupation" of Bogotá by students, backed by parents and professors as well as social and cultural sectors, is continuing even after the Colombian government offered to withdraw its controversial bill to reform education if the protests were called off.

By Helda Martínez
"Political power will be fought for metre by metre in the Oct. 30 local and regional elections in Colombia, because this is a country imbued with violence, with different armies disputing different parts of the territory," said Alejandra Barrios, director of the election observation mission (MOE).

By Helda Martínez
In one of the poorest neighbourhoods in the Colombian capital, 26-year-old Sandra Sánchez has created an oasis that offers meals, recreational opportunities, company and much more to hundreds of children and elderly people, in an example of solidarity and leadership that has transcended borders.

By Helda Martínez
The more than 1.2 million microenterprises operating in Colombia are responsible for around 50 percent of all employment. And many of these small businesses owe their existence to the microfinance system, according to a report by Visión Económica, a local business research group.

By Helda Martínez
"I give something, you give something," an Emberá indigenous craftswoman displaying her beautiful handiwork on a sidewalk in the Colombian capital told this reporter, saying she would pose for a photo in exchange for selling a pair of earrings.