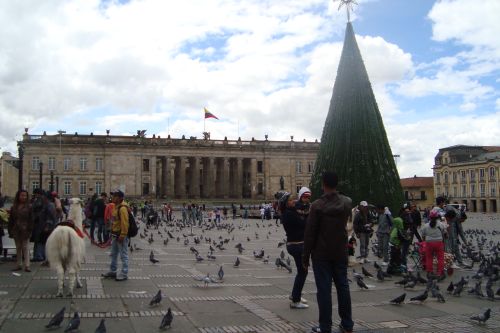 BOGOTA, Nov 19 2012 (IPS) - Scepticism, fear of expressing an opinion and a dash of hope make up the cocktail of responses from Colombians asked about the possibility of the decades-old civil war finally coming to an end as a result of the peace talks between the government and the FARC guerrillas, which began Monday in Havana.

“I really hope so,” María Jaramillo, a 40-years-old accountant, told IPS. “God willing. But I think it’ll be difficult, because nothing is easy with the guerrillas. Of course if peace is achieved it would be an enormous accomplishment, because many peasants would return to their land, all the bombing would stop, and the country would grow.”

Some of the other people interviewed by IPS in Bogotá’s central Bolívar square were more sceptical. Political science student Elizabeth Núñez said she did not believe the FARC (Revolutionary Armed Forces of Colombia) were really seeking peace, “although nothing is impossible.”

“So far, to judge by what the guerrillas are saying, it’s the same as ever. As if they had no intention of respecting the results of the dialogue,” Núñez told IPS, before the FARC negotiators announced a unilateral ceasefire on Monday in Cuba.

The actual start of talks in Havana is the culmination of six months of secret preliminary contacts between the government of conservative Colombian President Juan Manuel Santos and leaders of the FARC, the left-wing rebel group created in 1964 in the central province of Caldas by peasant farmers in response to injustice on the part of the government and the courts.

Santos announced in August that peace talks would be launched as a result of the preliminary negotiations held with the support of the governments of Cuba and Norway, which are now guarantors of the talks, and of Venezuela and Chile, as observers.

The “general agreement for the end of the conflict and the construction of a stable, lasting peace” that emerged from the preliminary talks basically proposes that the FARC will abandon armed struggle if the government agrees, among other things, to bring to a halt major mining and infrastructure projects in rural areas, and to carry out an ambitious comprehensive agrarian development plan.

The peace talks formally began in October in Oslo, with an agenda that encompasses land reform, including alternatives for illegal drugs; the future legal political participation of the guerrillas; an end to the armed conflict; and assistance for victims.

However, the content of each point on the agenda has not been clearly worked out, and radical differences have emerged. For example, the land restitution programme, the Santos administration’s flagship strategy, which the president sees as a major stride forward in the area of land reform, is criticised by the guerrillas as a measure that will actually benefit the business elites and foreign corporations.

Many Colombians, meanwhile, prefer to keep silent in this polarised nation.

When IPS approached a random selection of people in the square, which is surrounded by the cathedral, parliament, the Supreme Court, and city hall, nearly a dozen declined to talk, saying they didn’t have time, even though it was Sunday.

But many others did respond. “Peace! We have been needing a peace process for the past 20 years. The deaths of so many soldiers, guerrillas and civilians would have been avoided. That’s why I hope there will be no interferences in this process,” responded Arturo, 50, who said he was a secondary school teacher.

“But we also know about the economic interests behind the war,” he added. “Peace would take resources away from the army, and would end the business of the others (the insurgents), which is also lucrative. I think the conflict will still stretch on for a number of years.”

“One factor is the polarisation that was aggravated by (right-wing) president (Álvaro) Uribe in his two consecutive terms (2002-2010), by fanning radical hatred,” university professor Armando Ramírez, an expert on public opinion, told IPS.

“To this is added the generalised lack of understanding, all the way from primary school up to university, of the real significance of democracy, public opinion or civil society…and the media efficiently contribute to the disorientation by favouring the establishment’s arguments,” said Ramírez.

“On radio and television, most political programmes address this issue like show business: there are anecdotes, curious aspects, and short reports devoid of context, while serious newspaper stories and columns target experts or academics, not ordinary people,” he said.

Andrés Felipe Ortiz, a member of the non-governmental Observatorio de Medios en Derechos Humanos, Medios al Derecho, agreed with Ramírez. “People depend on information to have an opinion, but the press is not clear, and polarisation is exacerbated, so people conclude that the (peace) process won’t go anywhere,” he told IPS.

“Santos called for prudence, and that’s valid, but it’s not the same as concealing things,” he said. “It’s clear that the media do not help people understand things that are of mass interest. Nor is there any sort of teaching on human rights or international humanitarian law. Journalists document things, they don’t explain.”

In Bolívar square, there were also people who believe the peace talks should be joined by the demobilised United Self-Defence Units of Colombia (AUC), the far-right paramilitary militias created by large landowners in the 1980s, allegedly to fight the guerrillas, and who took part in a demobilisation process under the Uribe administration.

“It’s obvious that we should give ourselves a chance at peace,” Carlos Blanco, a lawyer who said he was an adviser to “an organisation that defends the demobilised” paramilitaries, told IPS. “But it’s also obvious that in this process, the AUC should be represented, because their demobilisation was autonomous and voluntary.”

The AUC “were created as a political platform that collapsed, because the initial rules of the game were modified and the chiefs were extradited,” he said, referring to the paramilitary leaders who were extradited to the United States on drug charges, such as Salvatore Mancuso, who is serving time in a U.S. prison and has asked to take part in the current peace talks.

“We will achieve peace when the different sides give in and the victims and victimisers sit down across from each other and forgive each other,” said Ismael Rodríguez, a 31-year-old airline employee.