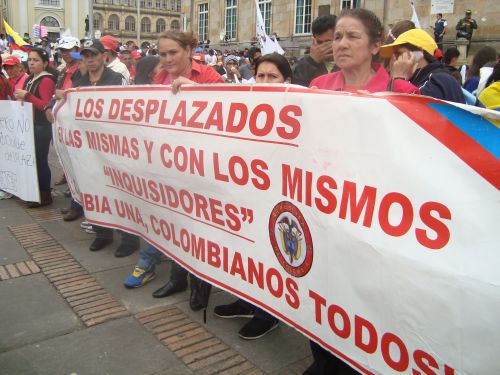 Campesinos from around the country flocked to Bogotá to demonstrate for peace and demand relief and protection. Credit: Helda Martínez/IPS

BOGOTA, Apr 12 2013 (IPS) - Wearing a dusty hat and a smile that lights up his face, the septuagenarian José Alicapa does not shrink from the overwhelming bustle of the Colombian capital, which he reached after a 13-hour bus drive from the western province in Caldas.

He and hundreds of other small farmers from across Colombia came to Bogotá this week to demonstrate for peace and demand that the government of Juan Manuel Santos give them support and protection to enable them to continue producing food in the crossfire of the half-century armed conflict that pits the armed forces and far-right paramilitaries against leftwing guerrillas.

Their demands include title deeds for those who work the land, technical assistance, subsidies, credit, development programmes and facilities to give them access to land.

“Campesinos (peasant farmers) are fundamental to production. That’s why I think the entire country should be declared a reserve where the rural population is protected,” Professor Tomás León Sicard, director of the ecological agriculture programme in the Environmental Studies Institute of the National University of Colombia, told IPS.

León Sicard was referring to the need to implement a 1994 law that hasn’t yet been codified, which would establish reserve areas for indigenous, black and campesino communities with certain conditions of autonomy and security.

That is precisely one of the key points on the agenda of the peace talks taking place in Havana between the Santos administration and the Revolutionary Armed Forces of Colombia (FARC).

“Even though they are the main victims of the conflict, campesinos continue working, in shocking conditions. They’re still in the countryside, producing around 70 percent of the food that Colombians eat,” he said.

Alicapa reflects that perseverance in the face of myriad difficulties. “On my land I grow coffee and bananas, but the last hailstorm caused a lot of damage,” he told IPS without losing his smile, more worried about the possibility of the bus leaving without him.

Fulgencio Yangües, of the Association of Farmers who are Victims of the Conflict, was more emphatic. “The government does not live up to its promises, and year after year we remain forgotten victims, displacement (of the rural population from their land by the conflict) continues, and the violence rages on,” he told IPS in a march on Tuesday Apr. 9 in Bogotá.

The latest report by the National Planning Department (DNP), based on statistics from 2011, indicates that poverty reached 46 percent in rural areas that year, and extreme poverty 22 percent.

According to the Gini Index, which measures income inequality on a scale of 0 to 1, land concentration in Colombia increased in the last decade from 0.74 to 0.88.

Agriculture represented 5.9 percent of the country’s GDP in 2011. By comparison, mining and quarries accounted for 14.3 percent.

A study carried out at the private University of Los Andes found that 77 percent of the land is in the hands of 13 percent of owners, and 18 percent of small-scale farmers do not hold formal title to their land.

The severe problems in the countryside were reflected by protests and a strike by coffee growers demanding relief in late February and early March. They lifted the strike only after the government announced that it would pay producers 80 dollars per sack of coffee beans.

But Finance Minister Mauricio Cárdenas clarified that this will “only be for this year, while coffee production recovers.”

But coffee producers have been in crisis for years in Colombia. The National Federation of Coffee Growers said that since 2004 the country has had to import coffee, mainly from Ecuador and Guatemala.

Today, up to 70 percent of the coffee consumed locally is imported, according to spokespersons for the Movement for the Defence and Dignity of Coffee.

After the coffee growers’ strike, rice farmers threatened to take similar action. But the government headed off the strike by offering economic supports and stiffer measures to curb contraband, especially from Ecuador.

“All of the difficulties arise from the concentration of land, but redistribution is apparently unlikely for the time being,” said León Sicard.

“The last agrarian reform process was carried out by President Carlos Lleras Restrepo (1966-1970), but the ‘Chicoral Accord’ of 1972 accelerated the colonisation of the tropical rainforest, which at the same time brought campesinos into contact with the coca trade. So these problems have been around for a long time.”

The Chicoral Accord with landowners limited the expropriation of idle land by the state and facilitated the colonisation of formerly protected areas.

“In Colombia we have a large range of conditions: rainforest, tropical, sandy and muddy soils, flat lands, steep slopes, and increasingly variable climates. But the policies now in effect don’t take into account the specific characteristics of each area,” he said.

“Today, 99 percent of agricultural practices favour methods using sophisticated machinery which, along with the use of pesticides and agrochemicals, demonstrates the powers and interests that lie behind them,” said León Sicard.

“Who builds the tractors, and who sells them? It’s not exactly the people who favour the campesinos from the highlands. So what transnational corporations are behind this? It’s a complex issue,” he said.

As a solution, the professor suggested “agroecology, which has brought very significant results in Cuba and Brazil.

“But in that area, Colombia has made much less progress than any other country of the Americas. Our dream is for this issue to be taken seriously and dealt with in a committed fashion in the peace talks,” he added.