COLOMBIA: Paramilitaries Dig in to Fight Return of Stolen Land

BOGOTA, Aug 5 2011 (IPS) - While President Juan Manuel Santos described his government’s land restitution policy as “a veritable revolution” during a speech in northwest Colombia, some 300 far-right paramilitaries were taking up positions less than 100 km from there to fight the effort to return land to small farmers displaced by the violence, human rights activists say. 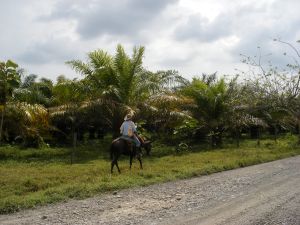 Santos, accompanied by a high-level delegation that included Agriculture Minister Juan Camilo Restrepo, reached Apartadó, the main city in the banana-growing region of Urabá, Wednesday to explain and celebrate his administration’s land reform policy, four days before the one-year mark in his presidency.

“We are changing the face of Colombia, we are carrying out a veritable revolution,” said the conservative Santos, whose government is granting legal land titles to small farmers and returning land to families driven from their farms by the armed conflict that began in the 1960s.

“As of Jul. 30 we have (granted titles to and restored) 361,000 hectares of land, benefiting more than 17,000 families,” the president said. “We have thus even gotten ahead of” the Victims and Land Restitution Law, which does not go into force until January 2012, he added.

The government’s land titling and restitution effort has begun in areas like Urabá, one of the regions hit hardest by the civil war between the far-right paramilitaries, backed up by sectors of the army, and leftwing guerrillas.

The nearly 230,000 hectares to which legal titles have been granted are property worked by small farmers, often for generations, to which they had no formal proof of ownership. The government believes that regulating property ownership in this way will make it more difficult for peasants to be pushed off their land.

In addition, 2,535 hectares that had been stolen by drug traffickers and paramilitaries were distributed to peasants, and another 14,278 hectares seized during the armed conflict were returned to victims of forced displacement.

The Santos administration also formally recognised 109,197 hectares of land in indigenous reserves, as well as 6,630 hectares collectively owned by rural black communities, according to the Ministry of Agriculture and Rural Development.

The granting of formal collective land titles included black communities in the Curvaradó and Jiguamiandó river basins, to the south of Apartadó, whose right to the land was already recognised by court sentences after a legal battle waged by the communities since 2000 with the support of the Colombian Inter-Church Justice and Peace Commission.

The paramilitaries launched an offensive in the region in 1996, with the excuse that they were driving out the guerrillas. As a result, the area was emptied of the local population and occupied by ranches and African oil palm plantations, a number of which were owned by paramilitary chiefs.

Between 3.6 million (according to the government) and five million (the estimate of human rights groups) Colombians have been displaced since the mid-1980s.

The formalisation of land titles on Wednesday included property near the towns of Belén de Bajirá, Pavarandó Grande, Caucheras and Cetino that was seized from small farmers, according to the Ministry of Agriculture.

“Cetino is precisely where the paramilitaries are at this moment,” the head of the Inter-Church Justice and Peace Commission, Catholic priest and human rights defender Alberto Franco, told IPS Tuesday.

He said some 300 paramilitaries had come into the Curvaradó and Jiguamiandó river valleys this week, through Puerto Brisas on the Curvaradó river, where army Brigade 17 has a military base.

“I can’t understand how 300 men can pass a military base, just 250 metres away, without being spotted. They were wearing camouflage fatigues and carrying long and short firearms. How can they make it into the area?” he commented.

“Through Puerto Brisas, they brought in 30 packages of coca seed, and they made it past at least three police and military control posts between Brisas and Llano Rico,” at the entrance to the valley, he added.

The group he was referring to calls itself “Los Rastrojos”. The 300 men were added to the presence of dozens of paramilitaries known as the “Águilas Negras” that had already moved into the valleys of the Jiguamiandó river and a tributary of the Curvaradó river since April.

People in the region are afraid that the groups have plans to pretend they are fighting each other, in order to displace the local peasant farmers.

Furthermore, in the last month and a half the encroachers have planted some 10 hectares of coca in territory that is collectively owned by the black communities, and they are reportedly shipping in chemicals used to produce cocaine.

The influx of drug trafficking in the area would profoundly alter the culture of the region and would put the local people in grave danger, Franco warned.

But above all, the phenomenon could completely unravel the progress made in the courts, because “if coca is grown in an area, the communities there lose their right to that territory,” he explained.

The leaders of the struggle for the return of stolen land are opposed to drug crops and the drug trade, and the threats against their lives and those of their children have been stepped up. Two have already been forced to flee with their families.

And one rural activist, Everto González, was reported missing on Jul. 23 after he was accosted by paramilitaries.

The ultra-rightwing groups offer salaries of up to 450 dollars a month, to recruit young men. That is more than a construction worker in Bogota would earn. And refusal to join means forced displacement, or worse.

The Inter-Church Justice and Peace Commission sees what is happening as an attempt to keep the property from being returned to its former owners.

Perhaps that was what President Santos was referring to Wednesday, when he said “The process of reparations to victims and restitution of land also has enemies.

“Many people think this is not the way to achieve peace,” he added. “There are even people who believe the victims should not receive reparations, while others think the land should not be returned to its legitimate owners.

“But we will not be derailed,” said Santos, who stated that in the three remaining years of his term, the challenge will be “to keep the enemies of this process from having their way.”