BOGOTA, Sep 8 2011 (IPS) - In one of the poorest neighbourhoods in the Colombian capital, 26-year-old Sandra Sánchez has created an oasis that offers meals, recreational opportunities, company and much more to hundreds of children and elderly people, in an example of solidarity and leadership that has transcended borders. 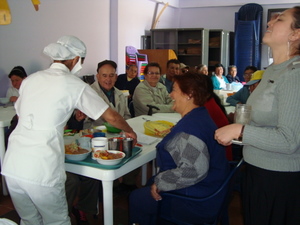 Sandra Sánchez, right, with a group of seniors at lunch time in the Oasis. Credit: Helda Martinez/IPS

In 2004, Sánchez established the Oasis Social Foundation in El Paraíso, a neighbourhood in Ciudad Bolívar – a poor district strung along the hills on the southeast edge of the Colombian capital that has been settled by hundreds of thousands of people displaced by the country’s nearly half-century civil war.

Sánchez’s family arrived 19 years ago in El Paraíso – which is located at the highest point of Ciudad Bolívar – when it was just barren hilltops, before it was gradually occupied by people who had fled the violence. “My dad built a small house out of guadua (a kind of bamboo that grows in Latin America),” the head of Oasis told IPS.

Reaching El Paraíso involves a 20-minute uphill bus ride through the sprawling working-class district of Ciudad Bolívar that is home to over one million of the 10 million people in the greater Bogotá area.

In Ciudad Bolívar, high levels of poverty and violent crime coexist with a spirit of solidarity that draws new displaced families to the area.

In Colombia, women represent 54.6 percent of the population over 65, since life expectancy for women is 77.1 years, compared to 70.9 years for men. Older adults account for 10.6 percent of the country's 46 million people, according to official figures from June.

Other official statistics, from 2010, indicate that many seniors are abandoned by their families and the state, and suffer poverty and high levels of domestic violence.

Elderly women often take care of children or work as domestics or in other informal sector activities to scrape by, since many have no pension. Furthermore, 62 percent have no partner, compared to 28 percent of elderly men.

Every day in Bogotá alone, 15 new seniors who have no other options seek refuge in overburdened public homes for the elderly.


In Oasis, breakfast is served daily to 260 children before they head off to school, and lunch to more than 150 children and seniors, who are also offered recreational and cultural activities.

The “house of values”, another Oasis programme, promotes collective knowledge, solidarity and non-violence, and offers adult literacy classes and workshops in art and other areas. “We encourage reflection on ethics, and we support dreams, like the one I had,” she said.

Another project that is just getting underway is the organic farm, which will supply the Oasis soup kitchens. The farm is located in a rural area in the municipality of Guayabal de Síquima, 68 km west of Bogotá, where the chill felt in hilly El Paraíso gives way to a warmer climate.

“We are seeking self-sustainability and food security, but also rest and recreation for the seniors and children we serve, many of whom have not even been outside of Ciudad Bolívar,” Sánchez said at the farm, surrounded by some of the people who are assisted by the programme.

There is also a special programme for teenage mothers, in this area where teen pregnancy rates are high and girls face, often on their own, a situation in which they need advice, guidance and support.

Solidarity from a young age

Sánchez’s neighbours found out about her vocation to help others and her leadership and organising skills when she was just a child. In 1994, at the age of nine, she was the first girl to be elected “personera” or student representative of her school.

As personera, she overcame any obstacle to obtain funds or repairs for her school. And two years later she was elected head of all of the “personeros” in Ciudad Bolívar, while she began to organise networks of student leaders and to represent her community in national and international meetings and events.

In 2002, at the age of 17, she won the prize for humanitarian action awarded by Madame Figaro, the women’s magazine produced by the French daily Le Figaro.

The catalyst for the creation of Oasis was the death of an elderly neighbour, María Pacanchipe, who died of hunger at the age of 68. “Her ulcer started to bleed because she didn’t have enough to eat,” Sánchez said. “She was my friend, and her death pushed me to talk less and act more.”

The case illustrated the problems faced in Colombia by elderly women, many of whom are steeped in poverty and neglect because they have no pension, no family, or have been abandoned by their relatives. “Women live longer, but in worse conditions,” Sánchez said.

In memory of Pacanchipe, she set up a day care for elderly women in her home, where they could chat, keep each other company, learn about their rights, tell their stories – even dance and sing. Elderly men soon joined them, and later children and their mothers started to come.

A university course on leadership, the Le Figaro prize money and support from local, Spanish and French organisations enabled her to build the Oasis Social Foundation building.

“I am moved by generosity in the midst of poverty and need,” said Sánchez, recalling how people came together to lay the foundations of the building, which is now three stories high.

Margarita, 69 – who did not give her last name – eats every day at Oasis, warding off the loneliness of her humble home by taking part in the activities there. She says she feels fortunate to be able to stay in her home thanks to the support she receives from the Foundation.

Her eyes fill with pain when she says her only son left for the United States seven years ago and she heard no more from him after receiving a few letters – a story similar to that of many other elderly women, in a country where 62 percent of women over 65 have survived their husbands.

An autobiographical book on Sánchez’s fight against poverty, “Los olvidados de Bogotá” (roughly, The Forgotten Ones of Bogotá), published in 2003 inspired Marianne Roussy from Switzerland to make the documentary “El paraíso de Sandra” (Sandra’s Paradise) which was screened in Bogotá and Paris in 2008.

“I was impacted by her work, and by this community organising project carried out by people who did not just sit around complaining but joined efforts and are moving forward,” Marie Claude Dubail, a Colombian-French woman who raised funds from the Paris city government and French NGOs, told IPS.

“The work here has helped me a great deal because we have four children, and my husband, a watchman, doesn’t always have work,” Lidibia Salazar told IPS. Her displaced family came to El Paraíso five years ago, and she works as a cook at the Oasis, which employs eight women from the neighbourhood.

“We get here at 4:00 in the morning. The kids start coming for breakfast at 5:30, and lunch starts being served at 11:00,” she said. “We work until 4:00 in the afternoon, to leave everything clean and organised. We are above all friends; we all take care of each other.”

Sánchez is about to graduate in law from the prestigious University of Rosario, where she studies on a scholarship. But her degree will not pull her away from El Paraíso, she promises.

Her case is not an isolated one in her neighbourhood, she says. “Life has changed for young people in this area. They dream more now about continuing their studies and going to the university. They don’t want to be street vendors like many of their parents.”

Oasis has a sponsors programme, who provide not only funding but other kinds of support.

“Company and affection are also important. Students at the University of Rosario, for example, are now aware of a reality that they knew nothing about before. And each one offers what they can. They gave grandmother Margarita a radio, and you can’t imagine how much that changed her life,” Sánchez said.