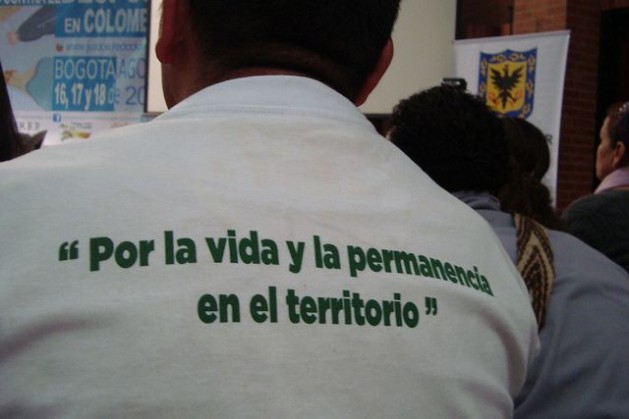 A participant in the ethical and political trial wears a t-shirt defending the right to life and the right of local residents to stay in their territory. Credit: Helda Martínez/IPS

BOGOTA, Aug 22 2013 (IPS) - An “ethical and political trial on pillaging of natural resources” in Colombia condemned three foreign corporations, including Canada’s Pacific Rubiales Energy, which has dozens of oil and natural gas operations around the country.

Some 500 rural and indigenous activists came to Bogotá Aug. 16-18, in some cases travelling up to 20 hours from remote mountainous and jungle areas to participate in the hearings.

The “ethical and political trial” was organised by the Red de Hermandad y Solidaridad con Colombia (REDHER), the Colombia solidarity network, which brings together civil society organisations and national and international legal experts.

The three companies on trial were Pacific Rubiales, South Africa-based mining giant AngloGold Ashanti, and Emgesa, a subsidiary of the Spanish-Italian Endesa energy company, which is involved in the El Quimbo hydropower project in the southwestern province of Huila.

At the hearings, 25 representatives of communities affected by the companies’ oil, mining and hydroelectric projects, activists and researchers presented testimony and evidence of alleged violations of environmental, social and labour rights.

One of them was Marcos Arrepiche, a former governor of the Turpial–La Victoria indigenous reservation of the Achagua people in the central province of Meta. The province accounts for half of Colombia’s oil production.

Most of Pacific Rubiales’s 2012 output of 246,575 barrels per day of crude was extracted through its local subsidiary Meta Petroleum Corporation, according to the company’s annual report.

The oil pipeline connecting the Campo Rubiales oilfield with Monterrey in the neighbouring province of Casanare runs through the Turpial-La Victoria reservation, Arrepiche told IPS.

The legal battle he is leading reached the Constitutional Court, which in September 2011 handed down a sentence stating that the community should have been consulted before the pipeline was put in.

International Labour Organisation (ILO) Convention 169 Concerning Indigenous and Tribal Peoples, ratified by Colombia, requires consultation of local indigenous communities prior to any project on their land.

But since it had already been installed, the court ordered the adoption of measures to mitigate the cultural, economic, social and religious effects of the construction of the oil pipeline on traditional native lands.

As a result, the community was given cattle, which neither mitigated the effects nor compensated the damage caused.

In addition, “around 800 tanker trucks drive through every day, affecting our lives and our crops,” said Arrepiche. “The spirits of the water are starting to leave. The water level in the Meta and Morichales rivers has gone way down.”

The road used by the oil tanker trucks is 360 km long, running from the Campo Rubiales oil field to Puerto Gaitán and Villavicencio, the capital of Meta.

But 190 km of the road are not paved, and “the dust thrown up from traffic on the roads hurts the pasture, and the cattle are unable to graze,” Ricardo Apolinar, an activist with the local NGO Corporación Choapo, told IPS.

In response to a request for an interview, Pacific Rubiales sent IPS an email stating that “the company operates under the strictest environmental, labour and social regulations, and is constantly audited by globally recognised independent institutions.”

“The relationship with the Sikuani ethnic group is one of ongoing dialogue in a spirit of utmost respect for their culture,” it adds.

There are several indigenous groups in municipalities of east-central Colombia, where Pacific Rubiales is active. The Sikuani are the group living nearest to Puerto Gaitán, the company’s main base of operations.

The native groups also complained about the effects of the nearly half-century civil war. The army and far-right paramilitary groups are active in the area.

“The paramilitaries and army try to recruit our boys,” said Arrepiche. “I fought hard for them to give me back eight young men who they had taken. And they abuse the girls, offering them money, and getting them drunk.”

After listening to the testimony, a three-member tribunal found the companies responsible, and declared that the state shared in the responsibility.

The tribunal was made up of Susana Deranger, a Canadian activist from the Athabasca Chipewyan First Nation; Eduardo León Navarro, a sociologist with the Consejería en Proyectos (Projects Counselling Service), an NGO; and Dr. Manuel Vega Vargas, a surgeon and doctoral candidate in history at the National University of Colombia.

There was no defence, since the accused did not respond to the summons.

The “moral verdict…is a step prior to civil or penal legal proceedings, within or outside the country,” Ramírez Cuéllar, who acts as a lawyer in some of the cases, told IPS.

“A group of lawyers in Colombia, Canada, the United States and Britain are evaluating the evidence,” he said. “In the near future lawyers from Australia and South Africa will also participate. Similar cases are moving ahead against Drummond, Chiquita, Del Monte, Cerrejón, and BP.

“They are slow processes, because the evidence must be sound,” he added. “But the complaints of the communities and the confirmation of the violence, poverty and environmental impacts caused by the multinationals are essential elements for putting them up against the wall.”

Although the companies did not respond, according to Ramírez Cuéllar “they have followed (the ethical and political trial) because they are interested in knowing how far we have gone in our investigations, and how much of a threat this is to them.”

Apolinar commented to IPS that when the companies consult affected communities prior to investment projects to seek their approval, in accordance with ILO Convention 169, they offer them “poultry farming projects, livestock, or crops on several hectares that end up dying because of the lack of follow-up care.

“The poverty level in indigenous communities is around 65 percent and many eat roasted cassava and ‘agua de panela’ (a drink made from unrefined cane sugar),” said Apolinar. “Where is the development that they are promising?”

The activist also complained that, since Pacific Rubiales is an important source of ad revenue for many media outlets, the public in Colombia receive virtually no information about the protests and denunciations against the companies.

IPS asked the mining and energy ministry and the national hydrocarbons agency about state controls over Pacific Rubiales.

In response, the hydrocarbons agency sent a socioenvironmental follow-up report showing that inspections have been carried since 2010, and that four requests for right of petition were filed by the community, over environmental and social damage.

The document sent to IPS says that in response to the requests for right of petition received earlier this year, the hydrocarbons agency’s social and environmental inspectors carried out new monitoring visits in July.

A report based on the results of the visits is to be sent to the company and to Cormacarena to complement the action plan and carry out the necessary monitoring, the agency added.

Cormacarena is the government unit for sustainable development of the La Macarena special management area, which administers a strategic 34,000-sq-km biological and geographic area that encompasses the Andean highlands, Orinoco plains, and Amazon rainforest ecosystems.

Pacific Rubiales is involved in oil industry activity in some municipalities in the area.

Activists in the areas affected by the company’s activities have also reported threats. Computers and part of the material compiled for the hearing were stolen from REDHER, and numerous threatening messages were received and websites of the participating organisations were hacked.

The Avaaz.org website urged supporters to sign a petition calling for guarantees for the organisations and individuals who took part in the ethical and political trial, and created the Twitter hastag #PacificnoesColombia.