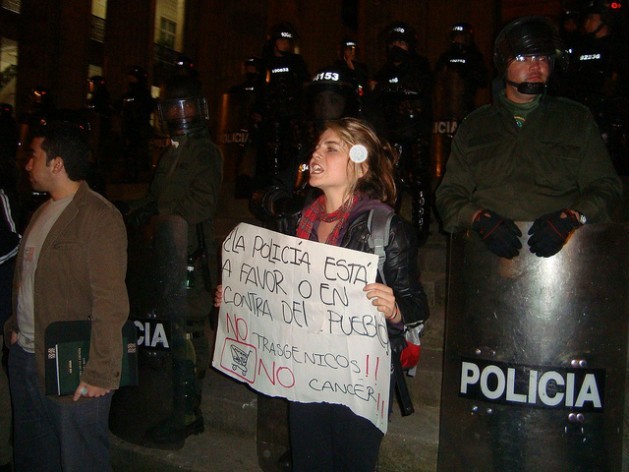 The protests in Colombia have spread to the cities, fuelled by images of police brutality against rural families. Credit: Helda Martínez/IPS

BOGOTA, Aug 30 2013 (IPS) - A strike declared nearly two weeks ago in Colombia by farmers and joined later by truck drivers, health workers, miners and students spread to include protests in the cities before mushrooming into a general strike Thursday, demanding changes in the government’s economic policies.

The protests ballooned after clashes with the ESMAD anti-riot police left at least two rural protesters dead and over 250 under arrest.

Also fuelling the unrest, say analysts, was the attempt by President Juan Manuel Santos to minimise the strikers’ actions. He said on Sunday Aug. 25 that “the so-called national agrarian strike does not exist.”

The authorities, meanwhile, allege that the nationwide roadblocks and protests have been connected to the country’s left-wing guerrillas.

The head of the Fensuagro agricultural trade union, Húber Ballesteros, was arrested Sunday, accused of financing the rebels. He is one of the 10 spokespersons selected by the Mesa de Interlocución Agropecuaria Nacional (MIA) to negotiate with the government.

MIA, a national umbrella movement, emerged from over two months of protests by campesinos or small farmers in Catatumbo, an impoverished area in northeast Colombia, where they are calling for government measures that would make it possible for them to stop producing coca – their main livelihood in the isolated, roadless area — and switch to alternative crops.

Since the campesinos began to protest in Catatumbo in June, the problems facing small farmers around the country have become more visible.

The difficulties they face are especially exacerbated in the central provinces of Boyacá and Cundinamarca and in Nariño in the southwest, where smallholder production of potatoes, onions, maize, fresh produce, fruit and dairy products is the main economic activity of much of the population.

Since Monday Aug. 19, small farmers around the country have been on strike to protest that they cannot compete with low-price food products imported under free trade agreements with the United States (in effect since May 2012) and the European Union (in effect since Aug. 1). They are also complaining about rising fuel, transport and production costs.

Another target of the farmers’ protests is “Resolution 970”, passage of which was required by the U.S.-Colombia FTA, which protects genetically modified seeds under intellectual property rights, making the replanting of them a crime.

In addition, they are protesting large-scale mining projects that have been given the green light in agricultural regions, without consulting local communities as required by law.

It all boils down to the lack of real policies for the countryside, says MIA, which presented a lists of demands before the farmers’ strike began.

On Sunday Aug. 25, the protests spread to the cities, after farmers posted photos and videos on social networking sites of the ESMAD riot police’s brutal crackdown on campesino families, including children and the elderly.

A mission of human rights defenders reported that the riot police had fired live ammunition into crowds of protesters, and that injured demonstrators had wounds indicating that they had been beaten and even stabbed or shot by ESMAD. The mission also documented reports of sexual abuse and rape threats against the wives and daughters of campesinos taking part in the protests.

One woman who reported that the police threw a tear gas canister directly at her inside her home told the human rights defenders: “I was cooking for my kids when I saw an ESMAD agent in the window who, without saying anything, broke the glass and just threw [the canister] inside. I ran out to protect my kids.”

In response to the images and reports of police brutality, people in the cities began to protest, with “cacerolazos” – where demonstrators bang on kitchen pots and pans – which are common in some Latin American countries but are unusual in Colombia.

President Santos apologised and launched a dialogue, in an attempt to negotiate by region or by sector. But his strategy failed and the unrest continued to spread.

Santos said on Wednesday Aug. 28 that his instructions to the security forces to clear the roadblocks, “as they have been doing,” were still standing.

On Thursday, he unexpectedly cancelled his participation in Friday’s Union of South American Nations (UNASUR) summit in Suriname.

Thousands of indigenous people in the southwestern province of Cauca reported Wednesday that they had begun rituals to join the protests.

“The national agricultural strike is the result of problems and demands that have built up over many years,” economist Héctor León Moncayo, a university professor who is a co-founder of the Colombian Alliance against Free Trade (RECALCA), told IPS. “The only solution now is to bring about a major transformation.”

“A true agrarian reform process has never been carried out in Colombia. Every attempt has failed,” he said. The civil war, which has dragged on for nearly 50 years, “was a pretext for building up military power, and in parallel, paramilitary power,” he argued.

“The far-right paramilitaries stepped up the violence against the campesino population, fuelling massive displacement,” he said.
.
According to the figures of the Consultancy for Human Rights and Displacement (CODHES), a leading Colombian human rights group, 5.5 million people were displaced from their homes between 1985 and 2012.

From behind the scenes, “the drug lords increased the concentration of land ownership, and today there are very few regions with a small-scale campesino economy. Clear examples are the latifundios (large landed estates) where sugarcane and African oil palm are grown,” Moncayo said.

According to January statistics from the National Agrofuels Federation, 150,000 hectares of land are dedicated to sugarcane and oil palm, of the country’s total of five million hectares of farmland.

The government of César Gaviria (1990–1994) introduced free-market reforms to open up the economy. And more recently, free trade agreements have further undermined the competitiveness of small farmers.

Moncayo said campesinos have lost the ability to make a living by selling their products, thanks also to dumping – the export of products by Colombia’s partners at prices below production costs.

“It would be very hard to get the free trade agreements revoked, but it is possible – and urgently necessary – to design sustainable policies for rural development for campesinos,” he said.

According to the United Nations Development Programme, 32 percent of Colombia’s population of 47 million lives in rural areas, and between nine and 11 million people depend on farming for a living.

“We need to make the transition from traditional agriculture to agroecology, to revive the Colombian countryside,” Adriana Chaparro, a professor at Uniminuto, a private college that offers degrees in agroecology, told IPS.

“Agroecology is a big challenge that would make it possible to obtain the best results from farming, without deterioration of the land,” she said. “It would also prevent what many are calling for: subsidies for agriculture, which would require increasingly large investments, which are difficult to finance.

“These protests, which include fair demands, are also an opportunity to take a close, critical look at our agricultural practices, without falling into the government’s way of thinking,” Chaparro said.

Agroecology student Tatiana Vargas said these practices “should become a way of life, which would help us go back to our essence.”