BOGOTÁ, May 16 2012 (IPS) - The entry into force of Colombia’s free trade agreement with the United States was met by student protests and opposition from a segment of the business community, small farmers, and trade unionists. 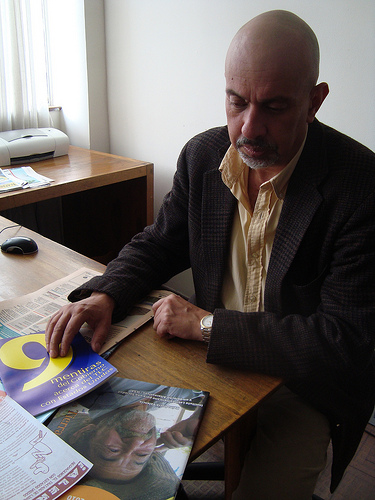 Enrique Daza: "It is easier to list the sectors that won’t be hurt by the FTA." Credit: Helda Martínez/IPS

The trade deal, signed in 2006 after two years of negotiations, went into effect Tuesday after a lengthy process of modification of Colombia’s domestic laws to bring them into compliance with the agreement.

In response to the protests Tuesday, the authorities closed down public universities, as well as bus stations in Bogotá.

The day was also marked by a bomb attack against the armoured car of Fernando Londoño, a former interior and justice minister of the government of Álvaro Uribe (2002-2010), which killed two of his bodyguards and injured him as well as some 30 passers-by. Another car-bomb had earlier been deactivated.

But the Colombian government celebrated the start of the free trade agreement (FTA) signed by then presidents Uribe and George W. Bush (2001-2009). President Juan Manuel Santos said the accord signed with the United States, which is already Colombia’s main export market, would boost this country’s economic growth by nearly one percent a year and create 500,000 jobs.

The FTA, which will be implemented in stages, will gradually eliminate tariffs on virtually all products traded between the two countries. It also contains provisions that regulate investment, agriculture, industry, services, telecommunications, intellectual property, public procurement, and environmental, labour, sanitary and cultural questions.

But activists, students, farmers and other critics of the FTA say Colombia yielded in a number of areas, in exchange for nothing.

To back up their arguments, they point out that President Barack Obama said the trade deal would help “achieve my goal of doubling U.S. exports.”

“But (Obama) says little to nothing about increasing imports,” Enrique Daza, the head of the Colombian Action Network Against Free Trade, told IPS.

The FTA will have a “scandalous effect on agriculture in Colombia, especially, immediately hurting the production of cereals, because huge shipments will enter our country (from the United States) tariff-free and at subsidised prices,” Daza said.

He added that the problem is aggravated by the fact that “the government does not fully control the entry of imports because it does not have a unified customs information system.

“This means that the authorised quantity could come in through each port, multiplying the amount of tariff-free goods entering the country,” Daza said.

“However, in contrast, the United States conditioned the entry of an important Colombian product, sugar, to a duty free quota, and did not guarantee the elimination of non-tariff barriers,” say the authors, Luis Jorge Garay, Fernando Barberi and Iván Cardona.

Under the FTA, 79,000 tonnes of tariff-free rice and 27,000 tonnes of chicken will enter Colombia from the United States in the first year alone, to the detriment of local farmers.

“Colombia’s consumer goods industry, which for years has suffered problems from the opening up of the economy, will continue to be hurt,” said Daza. “As a result, the big local industries will prefer to sell out to multinational chains, as occurred in the case of the Bavaria brewery,” which was the second-largest in South America and was acquired in 2005 by UK-based beer maker SABMiller.

Economist Juan Pablo Fernández, an adviser to the left-wing Independent Democratic Pole party, told IPS that small-scale producers of goods such as car parts, machinery and home appliances “will become mere importers, in the best of cases.”

Activists estimate that 350,000 small-scale beef and dairy farmers will be hurt by competition from beef imported from the United States.

Meanwhile, cut flowers from Colombia, which cover nearly 80 percent of demand in the U.S., will be directly affected by the strengthening of the peso against the dollar which, according to Daza, “is essential to the FTA, which states that intervention in the domestic foreign exchange market is considered anti-competitive.”

To all this is added the crisis facing the coffee industry. “We don’t have enough beans, so coffee is imported from Guatemala and Vietnam, to meet domestic demand,” he added.

With respect to which sectors will be affected by the FTA, Daza said “it is easier to list the ones that won’t be hurt, such as some importers and those who will profit from the economic activities of the state, like businesspeople who are already benefiting from trade globalisation policies.”

And Colombia is in an even more disadvantageous position because in eight years of negotiations it did not upgrade railways, rivers or ports in preparation for the changes to be brought by the FTA.

In other words, said Daza, “the negotiators of the agreement threw the country into the jaws of the multinationals.”

The treaty will also lead to an increase in poor-quality jobs in the informal sector, which is “the way to boost profit margins, like what has occurred in the flower business, palm oil plantations and small-scale mining,” he added.

The Oxfam report, meanwhile, states that the negotiation of the FTA did not even take into consideration issues that were described at the start as essential, such as Colombia’s decades-long civil war, “the importance of the welfare of the rural population to the economic, social and political stability of Colombia,” and “the need to create profitable alternatives to illicit crops.”

The negotiation, the authors say, “was governed exclusively by commercial interests.”

* With reporting by Constanza Vieira (END)