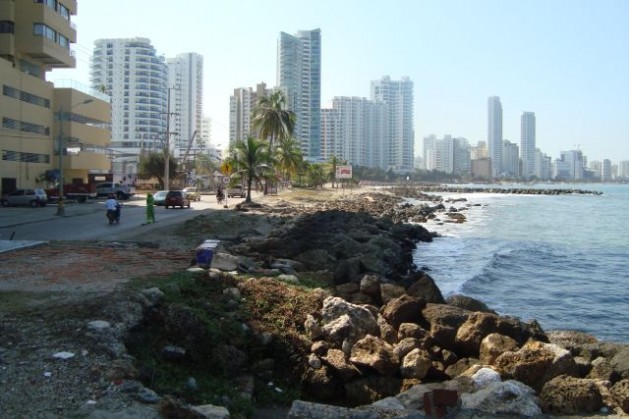 Buildings near the coast, like these on the Bocagrande promenade, will no longer be permitted in Cartagena de Indias. Credit: Helda Martínez/IPS

CARTAGENA DE INDIAS, Colombia, Feb 1 2013 (IPS) - The government of this historic walled city, a bastion of tourism on the Caribbean coast of Colombia, is widening beaches and building dual carriageways on its north side to protect against the ever-worsening impacts of climate change.

Construction projects close to the Rafael Núñez international airport were begun in August 2010 and are due to be completed by 2014, but they are already sparking complaints among the artisanal fisherfolk in the area, who perceive them as threatening their livelihood.

The projects include widening Santander Avenue, in order to improve mobility, create a cycle route and help protect the coast, according to an open document posted by the local government of Cartagena de Indias in December 2009.

The widening of the road and the beach will cause “minimal (environmental) effects, according to the findings of more than 100 professionals in different disciplines, including marine biologists,” engineer Jaime Silva, the general coordinator of the infrastructure works being carried out by the private Consorcio Vía Al Mar, told IPS.

The dual carriageway already extends for seven kilometres out of the city of Cartagena de Indias, named after Cartagena in Spain and home to one million people. It originates in the neighbourhood of Crespo, where there is a tunnel 600 metres long, with an additional 400 metres for the entry and exit ramps.

Cartagena has almost 49 kilometres of coastline on the Caribbean sea. To combat erosion, its beaches are to be made 60 metres wider and protected with a rock wall for a distance of 2.3 kilometres. Furthermore, nine new sea walls will be created along this coastal stretch adjacent to Santander and Primera de Bocagrande Avenues.

“In coastal cities like ours, when sand has been eroded and material has to be dredged up from the sea, authorisation is needed from public bodies” at the national level, marine biologist Francisco Castillo, adviser to the Cartagena de Indias Planning Secretariat, told IPS.

These permits allow dredging of the sea bed, and sand to be brought from dunes several kilometres inland, to be used for widening the beach.

The project is part of a plan called “Integrating climate change adaptation into city planning in Cartagena de Indias”, which is aimed at countering problems like the gradual rise in sea level, more intense rainfall, frequent swells, flooding and other climate alterations that have been experienced so far this century.

“Permits are based on technical studies of the dunes, and bathymetric studies to measure the depths of the sea bed. It’s something like taking out a loan from the sea bed, to put sand on the coastline, and create a soft protective layer that guarantees the width of the beach,” said Castillo.

The fisherfolk do not need special studies or reports to know that the project affects them. They know it from their daily experience of fishing for a living.

“The construction works are harming us, because previously we had beaches. The water used to come up to here,” fisherman Pedro Pineda told IPS, indicating a line now covered with sand and heavy machinery, at the edge of an old sea wall.

But the sea walls lost strength and utility over the years because of “lack of maintenance”, and need replacing, Castillo said.

Eduardo Jiménez, who has been a fisherman for 40 of his 50 years, also said that “the works do us an injury, because just think, even with the present sea walls, when there is a swell, we can’t fish. And the swells come up at any moment.

“We knew they were going to carry out engineering works but they didn’t consult us beforehand. Lately they have talked to us, over in La Boquilla (an adjoining village) where I live, but people are not content. In any case, now, we have to go farther away to fish,” Jiménez said.

Nowadays, “on a good day,” he earns the equivalent of 10 dollars, he said.

“The fisherfolk and beach vendors, as well as all the local residents, were informed in an efficient and timely manner,” engineer Silva affirmed.

“We remain ready to respond to any questions from any person,” he said, and stressed that Consorcio Vía Al Mar is hiring construction workers, cleaning crews and security guards from among fisherfolk and those who used to work giving massages or selling products on the beach.

But “sometimes the work is very hard, or boring for us who are accustomed to the sea and the open air. Many of those who were hired first have already quit,” Pineda said.

Silva, for his part, pointed out that fisherfolk and other local people were being offered stable jobs until the works are completed.

He also said that the project has responded positively to proposals by workers, including informal labourers, residents and traders, and that the area is one of the zones of greatest economic growth in Cartagena in the last decade.

“Opposition and uncertainty have arisen largely because of a lack of sufficient information. But this is being solved in an effective manner, by planning and correcting social aspects,” said Castillo.

The planning adviser underlined that only at the beginning of the 2000s did the city begin to turn its gaze — however timidly — to the sea and its coastal development in the comprehensive way that was needed, including taking account of global warming.

“In revising urban planning schemes for the next few years, we will be working hard on the issue of flood risks,” he said.

“On top of the construction works, clear and convincing guidelines will be established to prevent any building on land at risk of flooding, virtually on the beach, as goes on today,” he said.

“I hope they finish it, because it’s a good thing,” a passerby walking along the edge of the beach told IPS.

“It’s true that people are uneasy about the delay in different works, like the mass transport system and the underwater outfall pipeline (to carry urban wastewater out to sea), which has been delayed for over a year,” Castillo admitted.

“But it’s normal, with large projects involving the sea and rough conditions, that planning schedules are sometimes upset, although in this case the timetable is going well,” he said.

“Cartagena is a city surrounded by the sea and made up of islands, like Manga, Manzanillo and Barú, which makes its urban and social features more complex,” the marine biologist said.

But Castillo was confident that “when these projects are completed, they will convince the community that Cartagena de Indias is growing out of its parochialism and becoming (part of) real geopolitical strategy in the Caribbean.”