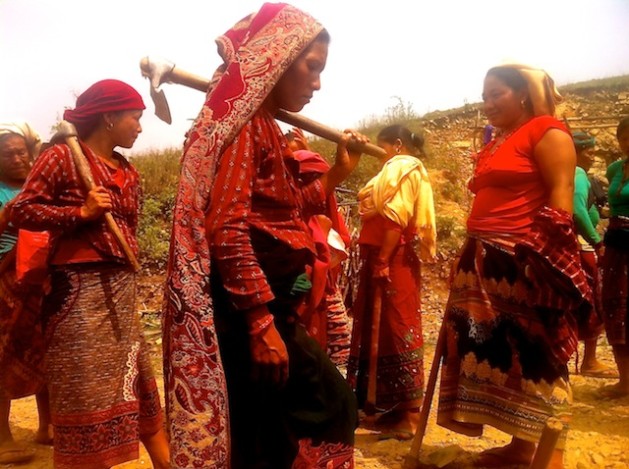 JHIRUBAS, Nepal, Jun 19 2013 (IPS) - Nearly 300 km from Nepal’s teeming capital, Kathmandu, in a small village dug into the steep slopes of the mountainous Palpa district, 35-year-old Dhanmaya Pata goes about her daily chores in much the same way that her ancestors did centuries ago.

Pata and the roughly 200 other residents in the scenic yet sparse Dharkesingh village, part of the Jhirubas village development committee (VDC), live off the surrounding forests, in bright red, thatched-roof mud huts.

Jhirubas is the most remote of the 3,913 VDCs scattered across 75 districts in Nepal, but it shares with its counterparts a high level of underdevelopment, food insecurity and poverty.

The road infrastructure is very weak and often gets washed away in the monsoon rains, making transportation of food very difficult – in fact, over half the population suffers from inadequate food consumption. The nearest water source is a three-hour walk away.

These villagers have no illusions of living in grand circumstances; their humble dreams consist only of ensuring a decent future for their children. And with the help of a massive leasehold forestry programme, they are doing just that.

Great swathes of the forests that cover 40 percent of Nepal’s territory have been degraded, prompting the government to embark on a project in collaboration with the United Nation’s Food and Agriculture Organisation (FAO) and the International Fund for Agricultural Development (IFAD) to convert wasted land into economic opportunities, officials at the Department of Forests (DoF) told IPS in the capital.

Four years later the government began pilot projects – led by the DoF, with technical inputs from the FAO and financial assistance from IFAD – in five districts including Jhirubas, where locals have converted degraded forest areas into the country’s largest broom grass plantations.

Locally known as ‘amresu’, the grass now covers 246 hectares of the 350-hectare region. The grass requires little water and thrives on steep slopes, preventing landslides and helping to remediate the soil.

By turning the flowers of the plant into traditional brooms, which are then sold to a local retailer, villagers earn the money required to stock up on food for the monsoon months when the roads in their landslide-prone village become impassable.

“In the last 12 months we earned about 3.5 million rupees (roughly 37,000 dollars) and the income is growing every year,” Navindra Thapa Magar, a local farmer and secretary of a leasehold forestry cooperative in the Kauledanda village of the Jhirubas VDC told IPS.

Each of the 246 households in the village earned about 150 dollars in 2012, income that has proved to be indispensable in supplementing villagers’ diets during the nine months out of the year when production of maize, wheat, potatoes, millet and green vegetables comes to a standstill.

Households surviving on less than 80 dollars per year quickly stood out as the target population for the project, which promised each family a 40-year free lease of one hectare of land.

DoF and FAO officials provided support by training farmers and initiating a shift away from slash-and-burn practices, known locally as ‘khoriya farming’, towards more sustainable agro-forestry techniques, in which crops are interspersed with trees and other plants, ensuring a longer and healthier life for the entire ecosystem.

What officials had not anticipated, however, was the level of women’s participation in the project.

A wave of male migration out of Jhirubas over the last few decades had pushed women into the dual role of labourer-housekeeper.

Daman Singh Thapa, chairman of the Kaule leasehold forestry cooperative, told IPS that when the scheme spread to their remote village, women quickly took up the challenge of planting and harvesting the grass, working long hours on the steep slopes.

While FAO experts say income generation has led to developments like the installation of water pipes, which relieve women of having to walk several kilometres each day in search of water, others worry that the burden of farming and business operations heaped on top of household chores and care of livestock might end up hurting rather than helping the community.

Forty-year-old Bom Bahadur Thapa told IPS that the work, which includes hand-clearing shrubs in order to plant the grass, and then hand-picking the flowers for the brooms, is backbreaking.

“Let’s hope that men become more involved, instead of leaving to look for work elsewhere,” she said.

Indeed, news of the project’s success has already gone viral, prompting migrant workers to return to their village after pictures of thriving broom grass plantations and the smiling faces of their families replaced images of hardship.

To reduce the drudgery of harvesting and carrying brooms on their backs to the local collection centre, several farmers in the community recently pooled their resources to purchase a tractor, becoming the first leasehold forestry group in the country to do so.

With the grass providing plenty of fodder, livestock herds have increased four-fold from roughly two to three goats to an average of 12 goats per family, said Hasti Maya Bayambu, chairperson of a leasehold forestry group in Dharkesingh. The community is even considering selling the excess fodder to markets outside their village.

But even while celebrating the project’s success, government officials are gearing up for the next big challenge: what to do when aid from the FAO and IFAD expires at the end of 2013, leaving farmers without technical inputs like free seeds, savings schemes and marketing trainings that are integral to the proper functioning of the micro-economy that has developed around the programme.

Narayan Bhattarai, the hub officer and key field officer of the pilot districts, told IPS that farmers rely greatly on the presence of fulltime field officers, who, in addition to arranging trips for officials and donor representatives, boost locals’ confidence in the project.

By the farmers’ own admission, it will take at least five years to attain full self-sufficiency. Unless donor agencies step up their efforts, the future of one of Nepal’s most successful rural development programmes hangs in the balance.