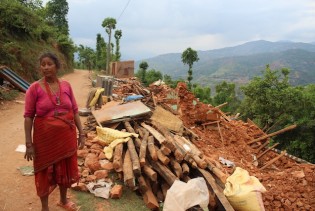 By Naresh Newar
With over 41 percent of Nepal's three million Dalits living below the poverty line, and over 90 percent classified as 'landless', the country must reassess its progress on the Millennium Development Goals (MDGs) vis-a-vis its most vulnerable populations.

By Naresh Newar
Ten years after she was trafficked to an Indian circus, 22-year-old Radha has returned home stateless, with no document to prove she is a Nepali citizen. Her parents are Nepali but she married a fellow Indian circus member, and does not qualify to be a Nepali citizen any more.

By Naresh Newar
Over 40 percent of Nepal is covered in thick forest, but most of it has been degraded. Rural communities that have traditionally relied on the forests for survival now live in abject poverty, struggling to secure the food necessary for survival. Most men have migrated to the Gulf in search of employment.

By Naresh Newar
Currently classified as one of the world’s Least Developed Countries (LDCs), Nepal has one of the highest malnutrition rates globally, with over 41 percent of children suffering from chronic under-nourishment, particularly in rural areas.

By Naresh Newar
Farmers in this fertile central district of south Nepal are convinced that an intense drought between May and early July that destroyed their maize crops is the result of climate change.

By Naresh Newar
When Arati Chaudhary’s husband left for India to find work as a migrant labourer, the job of managing farm and family fell on her slender shoulders.
Next Page »
ADVERTISEMENT ADVERTISEMENT