ABU DHABI, Jan 17 2013 (IPS), Jan 17 2013 (IPS) - High-tech showcases of renewable energy were not the only key element of the three-day International Renewable Energy Conference in Abu Dhabi – building political commitment towards seriously promoting renewable energy was an equally strong part of the summit, according to Mohammed El Ashry, chairman of Renewable Energy Policy Network for the 21st Century (REN21), during a press conference that concluded the global event. 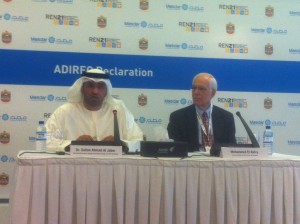 Mohammed El Ashry, of the Renewable Energy Policy Network for the 21st Century (REN21), participates in the closing panel of the International Renewable Energy Conference in Abu Dhabi, Thursday.

“There was a lot of emphasis on policy talks this year, to build policies for renewable energy,” El Ashry told Terraviva. He added that the only way to convert the world to utilizing renewable energy is through policy frameworks within each individual country.

Introducing new policies has been an important way to invite investment from the private sector, he explained, which has been the main driver to rapidly promoting renewable energy technology. This, in turn, was inspired by the sharing of knowledge and experiences by some nations. China’s experiences, in particular, were a great asset, he said, as it is one of the countries touting a successful history of using renewable energy.

In addition, the conference offered good examples of how policy tools can change a nation’s commitment to renewable energy. Germany, for one, is widely regarded as a pioneer among governments through its heavy investment in renewables, to the point that green energy has become cheaper than the grid.

“Now other nations have imitated this,” said El Ashry. As an example, “There were representatives from Saudi Arabia who are now initiating policies for new investment for renewable energy.”

A lot of emphasis this year was on the Middle East – a departure from last year when the comference’s focus was mostly on Asian nations’ energy struggles.

The regional focus of the summit underlines the recognition that global energy solutions need to go beyond a one-size-fits-all approach to problem solving. Every region is different and has to adapt to its own needs, Ashry stressed, adding that one cannot easily create policy tools for others, as it requires knowledge of the different ways society operates and how policies succeed.