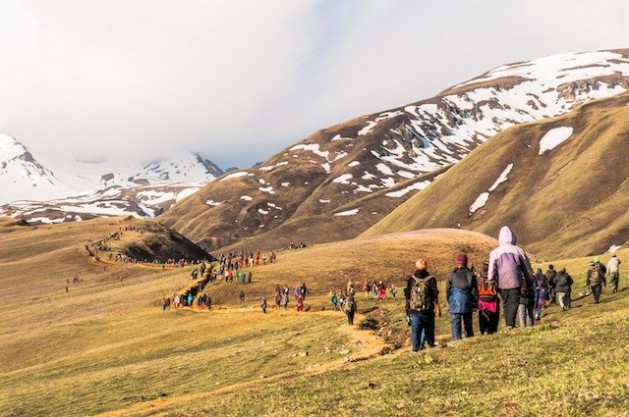 Hundreds of thousands of harvesters flock to high-altitude pastures in Nepal to gather a fungus known as ‘Himalayan Viagra’. Credit: Uttam Babu Shrestha

“The violence has already begun even at the initial stage of the harvest, and we can expect more,” Nepal Police Divisional Inspector General Kesh Bahadur Shahi, head of the Midwestern Development Region headquarters in Surkhet District, 600 km west of the capital Kathmandu, told IPS.

Earlier this month a harvester named Phurwa Tshering (30) was killed in a violent tussle in the Dolpa District, northeast of Surkhet, where tens of thousands of harvesters gather each year.

A second harvester, Thundup Lama, died some days later in a Kathmandu hospital from injuries sustained in the scuffle, amid allegations of police misconduct.

Known among the scientific community as ophiocordyceps sinensis – though harvesters refer to it simply as ‘caterpillar fungus’, and Tibetan traders use the name ‘yartsa gunbu’ (meaning, literally, ‘winter worm, summer grass’) – the fungus germinates underground inside living larvae, mummifies them during the winter, and then emerges through the head of the dead caterpillar, pushing up through the soil in the form of a stalk-like mushroom.

For over 2,000 years people across the Asiatic region have sought this fungus for its healing properties, including its fabled ability to treat diseases of the kidney and lungs, as well as cure erectile dysfunction. 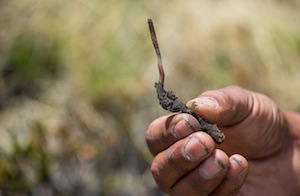 Since 2001, when the Nepali government legalised harvesting of the fungus, the mountains have become the site of a veritable battle royal.

Lured by the promise of high profits harvesters flock to the Himalayas every June to participate in the two-month hunt for the prized fungus, setting up camp on the northern alpine grasslands of Nepal, Bhutan, India and the Tibetan Plateau, at altitudes of between 3,000 and 5,000 metres above sea-level.

Though each stalk measures no more than four centimeters in length, a single gram of yartsa gunbu can sell for up to 80 dollars (mostly in China), making the dangerous, high-altitude hunt more than worth it for thousands of impoverished farmers.

But because the substance is so rare and so valuable, the collection period often turns deadly. So far, no one has been held accountable for the deaths, and Nepal’s police force has denied allegations of wrongdoing.

“Our team has headed for field investigations to the site where the incident occurred and we will also speak to the Nepal police to uncover the truth,” Bed Prasad Adhikari, secretary of the NHRC, told IPS.

“We need to wait until the investigation is concluded, and only then will NHRC reveal the truth to the public,” he added.

In 2011 a local court sentenced six men to life in prison for the murder of seven of their harvest rivals.

While Nepali security officials scramble to patrol some of the world’s roughest terrain, ecology experts warn of over-harvesting and the need for sustainable practices that could support local economies and end the cycle of violence.

“There is an urgent need for sustainable harvesting practices and an equitable benefit-sharing mechanism with the local people." -- Yam Bahadur Thapa, director general of the Department of Plant Resources (DoPR) at Nepal’s ministry of forests and soil conservation
The police are expecting more violence as the season enters its third week, and have already dispatched 160 personnel attached to the Armed Police Force (APF) – a paramilitary set up during Nepal’s decade-long civil war – to patrol harvesting sites, including the northern Mugu and Dolpa districts.

“We have asked for more personnel from the Nepal police to support our security operation,” Shahi said.

Speaking to IPS in Kathmandu, Police Spokesperson and Senior Superintendent of Police Ganesh KC told IPS this is the first time armed personnel have been deployed to oversee the harvest, and they are facing challenges due to the huge radius of the harvesting zone, and the extremely difficult terrain.

“There is a mafia of traders from Kathmandu and other adjoining Nepali districts near the Chinese border who are involved in the scheme, and they come with huge stacks of cash and will not return empty-handed,” Shahi said. “Some traders even bring helicopters to buy as much as they can.”

From policing to long-term policies

Various studies suggest that China’s booming economy, which has fueled demand for the ‘winter worm, summer grass’, has created a global market for the fungus that touches 11 billion dollars a year.

Nepal currently meets two percent of the global demand for the precious fungus, making it the world’s second largest supplier.

But as demand outpaces supply, and a valuable natural resource is plundered away annually, tensions over access rights have been mounting.

“There is loss of social integrity among local people; there are cases of robbery and deaths as a result [of this harvest],” Yam Bahadur Thapa, director general of the Department of Plant Resources (DoPR) at Nepal’s ministry of forests and soil conservation, told IPS.

“There is an urgent need for sustainable harvesting practices and an equitable benefit-sharing mechanism with the local people,” he noted, adding that the presence of outsiders often exacerbates tensions.

Thapa said the number of harvesters has doubled since 2001, while the number of units collected per person has declined drastically, from 260 pieces of fungus per person in 2006 to less than 125 now.

In addition, he asserted, “The price difference between the local and international market is huge, leading to an inequitable share of income among the primary collectors.”

For instance, a kilogram of fungus sold for 25,000 dollars by a middleman in Nepal could sell for up to 70,000 dollars once it is shipped abroad, he said.

“There is no single inch of habitat left untouched…at the end of the harvesting season,” Uttam Babu Shrestha, a research fellow at the Institute of Agriculture and the Environment at the University of Southern Queensland in Australia, told IPS.

His research during the 2011 harvest season in Nepal showed that, “Virtually all harvesters (95.1 percent) believe the availability of the caterpillar fungus in the pastures to be declining, and 67 percent consider current harvesting practices to be unsustainable.”

Shrestha found per capita harvesting to be higher in Nepal than in other countries, which adds to the tension. “Nepal’s harvesters and traders are doing business in a fearful environment,” he said, echoing the concerns of law enforcement officials.

Better central regulation would not only enhance sustainability and security, but would also increase government revenue, experts say.

The official royalty rate of around 10,000 Nepali rupees (about 100 dollars) per kilogram was set when Nepal legalised the harvest in 2001.

Since then, “The market price… has increased up to 2,300 percent and yet the royalty rate is the same,” Shrestha said, describing the stagnant rate as a “missed opportunity.”

The International Centre for Integrated Mountain Development (ICIMOD) estimates that the government of Nepal currently earns about 5.1 million rupees from the trade.

Experts say that by paying local harvesters a higher price, the government could witness a substantial increase in revenue flows.

Until the government agrees upon a comprehensive plan, the high-altitude pastures will continue to see fear, violence and destruction in pursuit of the mysterious fungus.