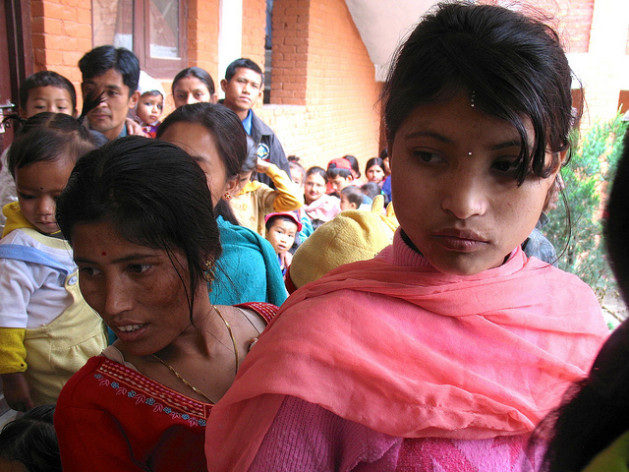 Many women in Nepal say they are treated as inferior citizens. Credit: Naresh Newar/IPS

KATHMANDU, Aug 3 2013 (IPS) - Ten years after she was trafficked to an Indian circus, 22-year-old Radha has returned home stateless, with no document to prove she is a Nepali citizen. Her parents are Nepali but she married a fellow Indian circus member, and does not qualify to be a Nepali citizen any more.

Her husband died without supporting her for Indian citizenship, and now she has no proof she ever married him.

“I don’t know where I belong any more,” Radha told IPS. She is struggling to start a new life with her two young children. But without a Nepali ID it’s hard. She cannot get a job in public service or the private sector, she cannot pursue higher education or buy property, and she cannot claim any inheritance.

She cannot open a bank account, and cannot register the birth of her children, or even register their marriage eventually.

There are tens and thousands of young women like Radha in Nepal, who don’t have citizenship. Trafficked victims have particular difficulty getting citizenship, according to Shakti Samuha, an organisation set up by trafficking victims.

According to the NGO, women who are trafficked or lured to India by Nepali traffickers are usually minors, and the minimum age for applying for citizenship is 16. When they return, most are already married and have lost contact with their parents, who could confirm their credentials.

The only choice for most is to work in the most exploitative informal sector – the so-called entertainment industry, especially ‘cabin restaurants,’ dance bars, cheap motels and massage parlours which harbour prostitution.

“Most of the trafficked victims or sexually exploited young Nepali women are further victimised when they have difficulty getting citizenship,” Biswo Khadka, director of Maiti Nepal, an NGO fighting trafficking and rescuing victims, told IPS. Precise numbers are hard to come by because lack of registration means lack of accurate data.

According to a report ‘Acquisition of Citizenship Certificate in Nepal,’ by the Forum for Women, Law and Development (FWLD) published in April this year, an estimated 4.3 million people in Nepal do not have citizenship certificates, in a total population of 26.6 million. Activists say most of these are women and their children.

At the heart of the problem is the constitution. Following the end of a decade-long armed conflict in 2006 and elimination of the monarchy the same year, an interim constitution was framed in 2007 to introduce significant social reforms to end discrimination based on caste, ethnicity and gender.

The Nepal Citizenship Act 2007 states that a Nepali can acquire citizenship based on either mother or father. But the chief district officers usually ask for the father’s citizenship.

FWLD executive director Sabin Shrestha told IPS that the law also does not apply if the child’s mother was married to a foreign national.

“A Nepali woman married to a foreign national is literally stripped of her national identity, and her children become the worst victims,” said advocate Sushma Gautam. She has successfully fought many cases of citizenship for women in the Supreme Court.

Government officials say it is incomplete documentation and not the gender bias that is the problem.

“Citizenship is a crucial issue for the government and it is making efforts to help its rightful citizens,” Umesh Dhakal, chief district officer of Parbat, about 300 km northwest of Kathmandu, told IPS. He is former coordinator of the citizenship cell at the home ministry.

Dhakal said the government had organised mobile camps in remote areas all over the country from April to June this year and distributed more than 600,000 citizenship certificates.

“As long as there is complete documentation, whether from the mother’s or the father’s side, every citizen will get the citizenship,” he said.

The National Women’s Commission says the chief district officers (CDOs), who are the sole authority for issuing citizenship, should implement the law without being discriminatory in their decision.

“The CDOs need to change their attitude and be more gender-sensitive on the citizenship issue,” said Ansari.