KATHMANDU, Aug 3 2009 (IPS) - A political crisis, which has dragged on for months, crippling progress in drafting a new constitution for Nepal by the Constituent Assembly (CA) has considerably dampened the euphoria of women's organisations here. 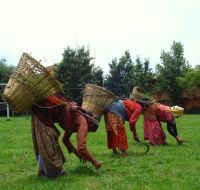 Even rural women understand a new constitution is being written, and for the first time their rights may be represented Credit: Mallika Aryal/IPS

The victory of many female candidates in last year's CA elections – trouncing veteran male politicians – had raised hopes that the new members, elected to write a fresh constitution for the country, would ensure gender equality.

Sixteen months later, it seems the Assembly may not meet its May 28, 2010 deadline for the endorsement of the new constitution. In June 2008, Nepal turned its back on monarchy – forcing then king Gyanendra to step down – and embraced republican rule. A new constitution will assure all citizens equal rights and privileges.

With 33 percent of the 601-members of the CA women, many of these nominated by political parties, there are female members in each of the 11 committees formed to discuss the draft of the new constitution. But women do not have a separate committee to discuss gender equality concerns.

"It is not possible to channel our issues through them (the 11 committees) because gender-related issues are not a priority," says CA member from Nepali Congress, Uma Adhikari, who is also the chair of the Inter-Party Women's Alliance. The Alliance was created in 2006 to pressure the government for 50 percent participation of women in all policy-making positions.

Women members would like their views reflected in issues of citizenship, property, and special reservation for women in judiciary, decision-making positions and administration. They are demanding that all women related issues be made into separate laws and not come under the government’s "plans and policies" list.

Women members have formed a caucus in the Assembly to mobilise and put pressure on the committees to discuss women’s concerns.

"Our issues are vast and complicated; urban women have different problems than rural, what may be an issue for women of one ethnicity is not for another, so one cannot be expected to discuss all that unless there’s a committee only for women," says Mohammadi Siddiqui, coordinator of the caucus and a CA member from Nepalganj in east Nepal.

Among the women in the Assembly are old-time politicians, war widows and young women who are political novices. Under the new proportional representation system introduced for the first time in the April 2008 election, political parties nominated 167 women members. The remaining 30 were elected.

Senior party leaders say the lack of experience is showing. It is a big challenge for new members to voice their opinions or participate in discussions. "They have the qualities required in a good leader, but without training that is of little use," Siddiqui told IPS. Advocate Sabita Bhandari Baral of the Nepal Bar Association has been closely following the issues raised in the Assembly, especially those relating to women.

She agrees that lack of training of the women members has been a big obstacle, but insists those without experience recognise their weaknesses and are trying their best to learn more. "It will be unfair to say they are not trying," says Baral, adding, "many NGOs are offering training programmes, and I have noticed that women members take them because they are worried that their weakness may lead to unfair representation of women."

As in other developing countries, patriarchy is one of the biggest challenges that Nepali women face today. "In our homes, society, offices, political parties, and now in the CA, Nepali women have to fight patriarchy," says Baral, adding that women leaders are often criticised for raising only women’s issues in discussions when the constitution of an entire country is being written.

Even Adhikari, chair of the Inter-Party Women's Alliance, says: "We do not just represent women, we have to represent our community, ethnicity and political parties also."

Baral believes the women's movement should lobby for change. "It is important for women leaders to understand that men will not fight our battles so pushing for women’s issues should be their top priority. We (the women's movement) should boldly ask for 50 percent representation," she says.

The women’s movement in Nepal has been very successful over the last few years. Relentless lobbying forced the then government to pass a bill decriminalising abortion in 2002. The same year, Nepal’s parliament enacted a law that allowed women to inherit property at birth.

Four years later, the Supreme Court scrapped a law that allowed men to seek divorce if their partner was infertile. A few months later, parliament unanimously took the decision to enable Nepali women to give their children citizenship rights. "It was this movement that pushed for 33 percent representation of women in the CA last year," says Baral.

However, women politicians in the Assembly complain that since their election victory, the movement has fizzled out. "Getting 33 percent in the CA was just the first step, but the voice of the (women's) movement is strangely missing since last year," says Adhikari.

This is the time for women's groups to be united and strong, says Siddiqui. "The reason we don’t have a separate committee for women is also because the women’s movement outside the CA seems to have given up."

Maoist member Amrita Thapa is the chair of the Natural Resources, Economic Rights and Sharing of Revenues committee. Earlier this year CA members went back to their constituencies to collect suggestions from the people on what the new constitution should look like.

Thapa went to Syangja in central Nepal and talked to women who she said understand that a new constitution is being written and that for the first time their rights may be represented. "They only had one suggestion for me and that was a request to not repeat the mistakes our former lawmakers made with regards to women’s rights," says Thapa.

Lawyer Baral remains very optimistic. "The draft constitution cannot be passed without approval, it has to be sent back to us for discussions and suggestions and if it is not what we think it should be, we will once again mobilise and pressure." Women are not giving up.