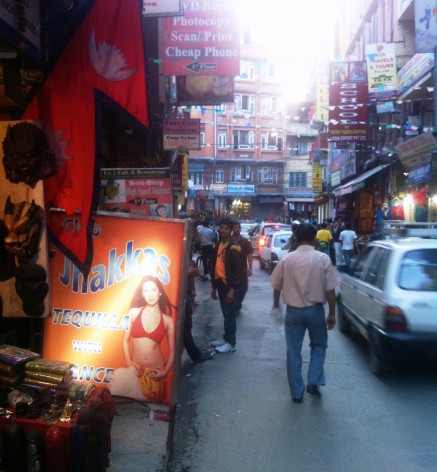 KATHMANDU, Jul 8 2012 (IPS) - Almost unnoticed, Nepal’s burgeoning adult entertainment industry has been drawing young girls away from being trafficked across the border to the fleshpots of India’s big cities.

Rights activists are worried that the issue of internal trafficking has not received the kind of legislative attention that resulted in laws, passed in 2007, to prevent and punish trafficking of young girls across Nepal’s borders by prostitution rings.

The result, they tell IPS, is that internal trafficking for the domestic entertainment industry is dismissed as an issue of exploitation rather than being treated as the more serious crime of trafficking for prostitution.

“Trafficking is happening right here in the country and not just to Mumbai or New Delhi of India,” says education specialist Helen Sherpa from World Education’s Asia division, which is working to combat child exploitation  through awareness programmes.

Although there are no government studies on cross-border  trafficking, a 2001 report by the International Labour Organisation estimated that around 12,000 Nepalese girls were being trafficked annually to India for prostitution.

Sherpa said that young girls from impoverished families are now being lured into working in the massage parlours and sleazy ‘cabin restaurants’ of Kathmandu and other cities with false offers of respectable jobs in the big hotels.

Cabin restaurants, massage parlours and dance bars make up the core of the entertainment industry, and a large number of them are known to be fronts for prostitution rackets.

There are also lodges, ‘bhatti pasals’ (small street eateries serving alcohol), and the ‘dohori’ (Nepali folk song and music) restaurants in the urban centres and along highways that are known to solicit clients.

In Kathmandu alone there are an estimated 11,000 to 13,000 girls and women in the entertainment business, according to ‘Trafficking and Exploitation in the Entertainment and Sex Industries in Nepal,’ a handbook prepared for decision makers by the Terres des homes Foundation (TDH) in 2010.

Many activists consider the handbook an important source of information and guidance for government agencies and leaders dealing with trafficking. But the country has a long way to go in implementing its recommendations and steps.

“Internal trafficking has not been dealt with effectively in Nepal. It has been hinted at and peripherally addressed without researched information,” expert on trafficking Nandita Baruah tells IPS.

“But it is emerging as a critical concern today,” said Baruah who heads the ‘Combating Trafficking in Persons Programme’ of the Asia Foundation in Nepal.

Baruah explains that authorities and development agencies address internal trafficking as an issue of  child sexual exploitation in the entertainment industry  rather than one of  trafficking for  prostitution.

Nationwide there are approximately 32,000 sex workers with about half of them minors under 16 years of age, according to the government’s National Centre for STD/AIDS.

Activists believe that half of these sex workers were lured by traffickers while the other half chose to enter the trade to escape desperate poverty. Many of them were as young as 12 to 14 years old when they were internally trafficked to Kathmandu, as told to IPS by sex workers who wished to remain anonymous.

“I was 13 when I arrived in Kathmandu to join a job at a hotel but I was taken straight to a massage parlour. I had never seen such a place before,” said Sita Tamang (name changed). Tamang said that the massage parlour employers treated her well, initially.

After a week, she was told what the job really entailed. “I was shocked and I cried a lot in the beginning as I was very scared and then other girls consoled me saying that it wasn’t dangerous as they had been through the same thing and they got used to it,” said Tamang.

Tamang, now 18, says she never went back home and does not want to face her poor farmer parents. When she sees very young girls being brought in,  she is reminded of her own  past and feels bad , but  is powerless to do anything about it.

“Sometimes we fight with the owners when they bring in young girls. Once I had a physical fight with an owner over a very young girl and he let her go only after I threatened to have it reported in the newspapers,” said another masseur who started work when only 14.

She called the girl’s parents in Makwanpur district, 200 km from Kathmandu, and asked them to take their daughter home. “I screamed at them at the bus stop as I was reminded of my own past,” she said.

Cases of sex workers being sensitive and strong enough to prevent the recruitment of minors are rare. The general trend in the entertainment industry is for sex work victims to turn into traffickers themselves in a self-perpetuating system.

Studies by TDH show that entertainment workers are also primary procurers of girls for the industry and are paid for it.  Often, according to TDH studies, girls and women are not allowed to leave work until they find a replacement or repay debts by providing fresh recruits from their villages.

So far, the only action taken by the government has been in the shape of  occasional raids on entertainment establishments, though anti-trafficking laws are never invoked, activists say.

A major legal loophole is that Nepal has no law against prostitution and the girls, if arrested, are booked for disturbing the peace or obscenity. Usually, they are locked up for 24 hours and fined, but quickly return to work.

The girls earn about 100 dollars per month as salaries in the entertainment joints with the owners skimming off the bulk of the profits. Yet, many prefer that to the grinding poverty of Nepal’s rural villages.

According to TDH studies, a quarter of the establishments where the girls work bring in 10,000 dollars per month while at least half make about 4,000 dollars a month – considerable sums in impoverished Nepal.

“The severity of such crimes has not been measured and this is why the supply of girls has been easy,” said Asia Foundation’s Baruah.

She added that there is a need to conceptually clarify both the difference and the overlap between sexual exploitation and trafficking and then make a case for it within the criminal justice system.

“People have to first accept that internal trafficking is happening and the government has to acknowledge that this is a huge problem that needs more focused attention,” she explained.