KATHMANDU, Sep 16 2011 (IPS) - While a Nepalese campaign to stop human trafficking gains recognition by the White House and Hollywood, Nepal continues to be a prime source for sex trafficking, thanks to unsettled conditions created by a protracted political crisis. 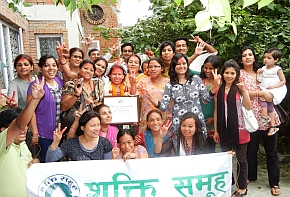 “We collected the signatures of 10,000 prominent people to urge the government for stronger state measures against trafficking,” says Benumaya Gurung, programme coordinator at Alliance Against Trafficking in Women and Children in Nepal, a network of 27 human rights organisations.

“We wanted to hand them over to the minister for women, children and social welfare (WCSW). Unfortunately, there is no such minister.”

Since 2002 there have been nine short-lived governments that failed to combat trafficking. The tenth, sworn in last month, is yet to appoint a full-fledged WCSW minister and relief measures announced this month ignore trafficking.

Perhaps the biggest state failure has been the absence of a single survey on how many people are trafficked annually.

“The most oft-quoted survey on trafficking was sponsored by the International Labour Organisation in 2001,” says Hari Paudel, spokesman at the WCSW ministry. “It estimated that around 12,000 Nepalese girls were trafficked annually to India for prostitution.

“The only government data is from the 2001 census that listed 83,000 people as missing. Of them, 36,000 were women. However, the data is insufficient as all the missing people may not have been trafficked.”

The number reported by police, the main data source for the state, is impossibly low – below 200 per year.

“People are loath to report incidents of trafficking,” Paudel says. “We have come across villages that have no women. The villagers say their women have gone to India in search of work and will be back.”

The 11th Annual Trafficking in Persons Report released by the United States this year, points out gaps in Nepal’s anti-trafficking laws, though the Human Trafficking and Transportation Control Act (2007) and Regulation (2008) have tough penalties, including 10 to 20 years’ imprisonment and fines.

“Politically connected perpetrators enjoy impunity from punishment,” the report said. “There were no trafficking-related investigations, prosecutions, or convictions of government officials for complicity in trafficking during the reporting period.”

Because society stigmatises survivors, their rehabilitation is painfully difficult.

A classic case is that of Charimaya Tamang, recipient of the U.S. government’s 2011 ‘Hero Acting to End Modern-Day Slavery Award’, who was abducted from Sindhupalchowk district at 16 and sold into a brothel in India’s Mumbai city in 1994.

For 22 months, she was regularly beaten, raped and burnt with cigarette butts in the notorious Kamathipura red-light area. Then in 1996, Charimaya and hundreds of other prisoners were rescued in one of the largest-ever police raids on Mumbai’s brothels.

Charimaya says her village ostracised her. But, she personally filed a case against the eight villagers who had sold her, becoming the first survivor to do so. In 1997, the Sindhupalchowk Court convicted all.

Sunita Danuwar from eastern Nepal’s Udaypur was sold to the same brothel when she was 15 but rescued soon afterwards.

“There were nearly 200 girls from Nepal,” Danuwar says. “Many of them were 12 or 13. One died of AIDS in the rescue home. That made me decide we have to do something when we returned home.”

In 2000, Charimaya, Sunita and 14 other survivors founded ‘Shakti Samuha’, an anti-trafficking non-government organisation (NGO). Today, they run three safe houses for rescued victims and conduct awareness and intervention programmes in 10 of Nepal’s most vulnerable districts.

This year, Charimaya, now 34, travelled to Washington to receive the anti-slavery award from U.S. Secretary of State Hillary Clinton.

The documentary, ‘Nepal’s stolen children’, records the stories of some of the girls rescued by Maiti Nepal.

Thanks to these campaigns, social attitudes are changing towards trafficking survivors.

“In 1996, there was stiff resistance when the Kamathipura victims were returning home,” recalls Benumaya. “The public sentiment was that they would spread HIV/AIDS and pollute society. Some even advocated that they be burnt alive. The state needs to do more.”

In 2000, the U.N. adopted the Convention against Transnational Organised Crime that covers trafficking. It is supplemented by three protocols, of which the protocol to prevent, suppress and punish trafficking in persons, especially women and children, gives the greatest boost to anti-trafficking campaigns.

Though Nepal signed the convention in 2002, it is yet to ratify the protocol.

Campaigners also want legislators to ensure education and jobs for survivors, free healthcare and citizenship in the new constitution they are drafting.

“Many of the victims were sold as minors and did not have a citizenship certificate,” says Benumaya. “When they come back, some have children. Both mothers and children become stateless. They should be granted citizenship.”

The other major demand is for compensation. Offenders are fined up to Nepali rupees 200,000 (about 2,580 dollars), half of which goes into a state rehabilitation fund.

“How can the government take half the money?” asks an indignant Charimaya. “It is the state’s responsibility to rehabilitate survivors.”