Stories written by Sudeshna Sarkar
Sudeshna Sarkar is a Kathmandu-based journalist covering Mt. Everest, politics, and issues related to women, crime and religion in Nepal, and partially India and Bhutan. She works for Indo-Asian News Service and The Times of India and also contributes to Ecumenical News International. 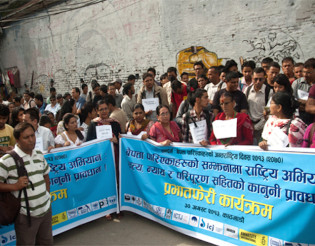 By Sudeshna Sarkar
Naomi Fontanos is seeing a change from when she went holidaying in 2002. Then she had run into ignorance about transgender people or worse at hotels, restaurants and other business establishments in Boracay, the popular tourist destination south of Manila.

By Sudeshna Sarkar
Namuna Gautam was among millions of Indian women who celebrated Rakshabandhan this year, but one thing set her apart. It was the first time the 80-year-old took part in the festival, in which sisters pray for the long life, health and happiness of their brothers.

By Sudeshna Sarkar
Four months after her murder, you can see Rosy Maharjan flashing the two- finger victory sign - from a Facebook page. With police arresting the 21-year- old’s boyfriend and the people he hired to kill her due to jealousy, agitated civil society members have opened accounts on social networking sites, demanding justice for the slain college student.

By Sudeshna Sarkar
Sonikumari Jha puts on her green camouflage fatigues, deftly laces up her boots and is ready to step out and announce her decision to embrace a new life. Her four-year-old son, who has been watching the same rote for years, is puzzled by an important omission. "Mama, you have forgotten your gun," he calls out.

By Sudeshna Sarkar
A mountainous country that boasts of eight of the 14 highest peaks in the world, including Mt Everest, Nepal is threatened by both deluge and drought with climate change shrinking its glaciers by 21 percent in 30 years. As rising temperature disturbs the balance of snow, ice and water in the Hindu Kush Himalayan region where it is located, millions of mountain people and 1.3 billion people living downstream in Asia's major river basins face the loss of livelihood, homes and lives due to flash floods and droughts.

CLIMATE CHANGE: Himalayan Nations Yet to Break the Ice

By Sudeshna Sarkar
Chungda Sherpa, a former herder from eastern Nepal, has a warning tale ahead of the United Nations climate change conference in Durban.

By Sudeshna Sarkar
Suntali Shrestha wrings her hands in tension and despair as she recounts how she has been spending sleepless nights fearing that the flood alarm in her village would go off while she slept and she would be submerged.

By Sudeshna Sarkar
Though Nepal was relatively unscathed by the earthquake that wreaked havoc in the adjacent areas of India this week, it showed up this Himalayan country’s inadequate disaster preparedness.

By Sudeshna Sarkar
While a Nepalese campaign to stop human trafficking gains recognition by the White House and Hollywood, Nepal continues to be a prime source for sex trafficking, thanks to unsettled conditions created by a protracted political crisis.

By Sudeshna Sarkar
Inspired by Indian socialist leader Anna Hazare’s celebrated public fast against corruption in the Indian capital of New Delhi, starvation protests have sprung up in Nepal to press for a timely new constitution.

By Sudeshna Sarkar
Six years ago Shantimaya Dong Tamang went to Kuwait to work as an illegal domestic worker, falling for brokers’ tales of how she could earn good money and stand on her own feet.

By Sudeshna Sarkar
When Binita Lamichhane got married she was troubled by her husband's bloodshot eyes. "What happened to your eyes?" the 18-year-old bride asked. "Smoke," came the answer.

By Sudeshna Sarkar
The recent gang-rape of a Buddhist nun and her expulsion from her sect have sparked a debate about the deep-rooted religious traditions and biases that foster discrimination and violence, especially against women, in this South Asian state.