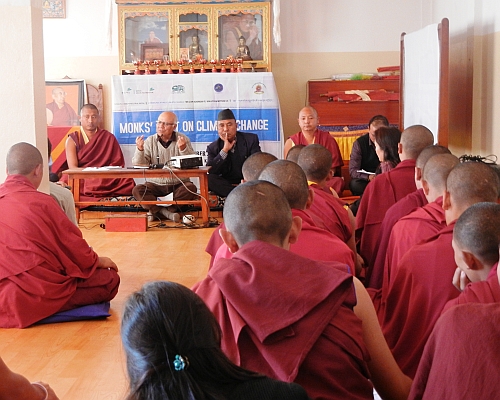 KAVRE, Nepal , Dec 2 2011 (IPS) - There are gasps from the audience as a series of shocking images flash across the screen: human hands eaten away by arsenic, the carcass of a cow so emaciated that it looks two-dimensional, a starved child with matchstick legs grasping at the udder of an animal for sustenance.

“I am showing you these images to make you understand why we need to focus on the environment,” says the red-robed Tibetan Buddhist monk who has put together a chilling collection of photographs titled ‘A true story of Mother Earth’ on his laptop.

Karma Samdup Lama, a poor peasant’s son who became a Buddhist monk at the age of 12, now the vice-principal of a school for Buddhist novices, is showing the documentary to nearly six dozen monks and nuns gathered at the Thrangu Tashi Yangste monastery in Namo Buddha village, about 40km east of the Nepali capital.

It’s an unusual gathering. Though it started with the ‘Tashi Tsikgye’, Tibetan prayers chanted as benediction, it is a meet on climate change.

The ‘Monks’ Meet on Climate Change’ in November brought together renunciates from different monasteries and nunneries in Nepal to discuss what they can do to reduce their carbon emissions and why they need to do it.

The meet was the brainchild of The Small Earth Nepal (SEN), a non-governmental organisation (NGO) promoting sustainable lifestyles and conservation. It had support from the Korea Green Foundation, a Seoul-based organisation working on environment conservation.

“We decided to start a climate change awareness programme with the monks and nuns because Nepal is a deeply religious place,” says Niranjan Bista, SEN’s coordinator for the project. “It looks up to the religious communities for inspiration and role models.”

Though Nepal is home to diverse religions, SEN chose the Buddhist community after research by Sundar Layalu who, as part of a British Council project, made the surprising discovery that monasteries have higher than normal carbon emissions.

Buddhism rejects physical luxuries to achieve spirituality and monks live an austere life. Yet Layalu, who chose the Thrangu Tashi Yangste monastery for his 2009-2010 research, found its carbon emissions unusually high due to a combination of fossil fuel use and a regular stream of visitors.

“The monasteries are often located at remote, high places; transporting food and other things require more car fuel. They also use generators to pump up drinking water. Besides, there is also the heavy use of incense,” says Sudarshan Rajbhandari, vice-president at SEN.

“The Buddha taught to protect the environment,” says Karma Sandup. “He said we owe our existence to the four elements – water, earth, air and fire – and we have to conserve them. He also said plants should be nurtured till they became trees, like a mother protects her child.”

Karma Drolma a 55-year-old nun from Nepal’s remote, mountainous Manang district, who joined the Thrangu Tara Abbey for Tibetan Buddhist nuns when in her early teens can read and write only in the Tibetan language and remains cloistered, but she is aware of the changes taking place due to global warming.

“The mountains are melting and rivers are receding,” she says. “If this continues, all water would vanish one day and both people and animals will die.”

Bista says there was a special reason to choose the monastery at Namo Buddha for the climate awareness meet. “It is a well-known trekking and tourist destination and we hope the message will go out to these people as well.”

The monks’ meet ends with a pledge to do whatever is possible to resolve the global threat of climate change “which will ultimately entail ever greater human suffering, inequity, and irreversible damage to the earth.”

A billboard, standing sentinel at the monastery entrance, reminds residents and visitors of the Buddha’s teachings.

“The Buddha taught that the well-being of all life on earth, not just humans, is important and equally valuable,” the billboard says. “Hence we have an obligation to adhere to a more thoughtful way of living, which results in a natural balance and a harmonious future.”