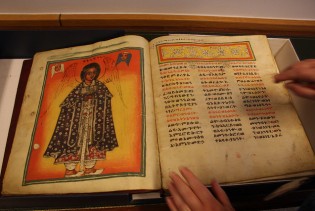 By Lisa Vives
Prize-winning writer Chimamanda Ngozi Adichie is hoping to break down some stereotypes at the upcoming World Voices Festival sponsored by the PEN America free expression group.

By Ignacio Ramonet
I had been told he was in Havana but that, because he was sick, he didn’t want to see anyone. I knew where he usually stayed: in a magnificent country house far from the city centre. I called on the phone and Mercedes, his wife, eased my doubts. She said, warmly: “Not at all, that’s to keep the pests away. Come over, ‘Gabo’ will be happy to see you.”

By Ivet González
Two men kiss each other while two women dance together without making other clients feel uncomfortable at the prívate club Humboldt 67, one of the venues seeking to cash in on an untapped market by fulfilling the unmet demand for bas, restaurants and other recreational spaces for the LGBTI community in the Cuban capital.

By Dan Bloom
When we read novels or short fiction in any language, we read to understand the story. We read to learn something new, and hopefully to get some kind of emotional uplift through the words on the page and the skills of the storyteller.

By Sudeshna Chowdhury
The village of Hampi located in India's southern state of Karnataka has long been an attraction for tourists from all over the world.
Next Page »
ADVERTISEMENT ADVERTISEMENT