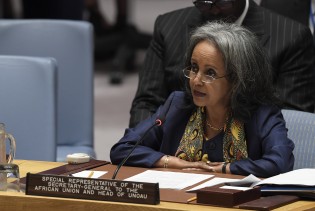 By James Jeffrey
Throughout fifty years of struggles, South Sudan’s different churches have remained one of the country’s few stable institutions, and in their workings toward peace, have displayed a level of inter-religious cooperation rarely seen in the world.

By James Jeffrey
Grasping its limp leg, a woman drags the carcass of one of her few remaining black-headed sheep away from her family’s domed shelter fashioned out of sticks and fabric that stands alone amid the desiccated scrubland a few kilometers from the town of Dolo Odo in the southeast of Ethiopia near the border with Somalia.
Next Page »
ADVERTISEMENT ADVERTISEMENT