Food waste and loss is of increasing concern due to the wide implications ranging from health care to the environment. Finding a solution requires everyone to look at how they eat. 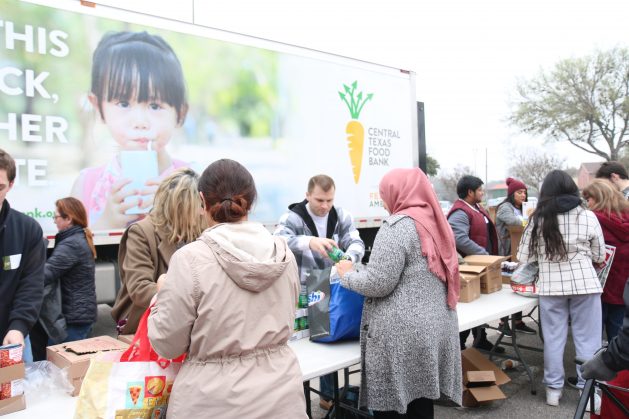 AUSTIN, United States, Apr 9 2019 (IPS) - There’s much to think about regarding food this month. April is Reducing Food Waste Month in the United States, as efforts mount here to reduce food loss and waste, while globally Sunday Apr. 7 was World Heath Day.

In dustbins across America, food is the single largest type of daily waste. More than one-third of all available food in the U.S. goes uneaten through loss or waste, a proportion replicated globally.

Increasingly there is an acceptance that when food is tossed aside, so, too, are opportunities for economic growth, healthier communities and environmental prosperity. The hope is that this can change through partnership, leadership and action, underpinned by education and outreach.

“There is increasing recognition of the need to sensitise and educate consumers, particularly in urban centres, to value food and reduce food waste,” Florian Doerr from the Food and Agriculture Organization (FAO) of the United Nations tells IPS. “Recognising that children and young people are the consumers that will shape the food waste scenario of the future, investing in their education to reduce food waste will help in creating a culture of change toward sustainably stemming the problem.”

Hence the work being done by the likes of the Barilla Center for Food and Nutrition Foundation (BCFN), a non-profit research centre studying the causes and effects on food created by economic, scientific, societal and environmental factors.

It has produced for the U.S.—as well as for another 66 countries—a food sustainability index profile that dives into all the relevant sectors, ranging from the likes of management of water resources, the impact on land of animal feed and biofuels, agricultural subsidies and diversification of agricultural system, to nutritional challenges, physical activity, diet composition and healthy life expectancy indicators.

“We want to provide tools for all the stakeholders involved, ranging from those deciding policy to students becoming better informed,” BCFN’s Katarzyna Dembska tells IPS. “The goal is to enable people to make more informed choices, both nutritionally and in terms of the impact on the environment.”

The stakes are high. Food production is the largest contributor to climate change (31 percent), exceeding the heating of buildings (23.6 percent) and transportation (18.5 percent), according to global estimates.

The consequences of climate change on agriculture and human health are one of the most significant problems we will face in the coming years, says the World Health Organization (WHO), due to the increase in temperatures and atmospheric pollutants. According to recent estimates, air pollution in Italy causes the death of over 90,000 people a year, a record in the European Union (EU).

“People are starting to realise that the food system is built into so many other sectors,” Brian Lipinski from the World Resources Institute tells IPS. “Agriculture has implications for land use, what we eat, and so many other aspects of our lives.” 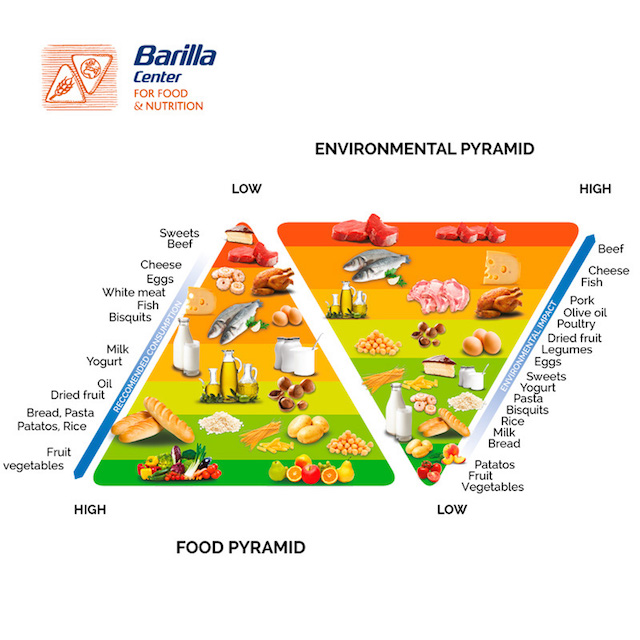 The double food and environmental pyramid model developed by the BCFN Foundation emerged from research and an evolution of the food pyramid, which forms the basis of the Mediterranean diet. Photo courtesy BCFN.

Given the differences in food and agriculture systems and various inputs across different countries, Dembska notes that it is important users of the food index try to dig deeper and explore the underlying thematic pillars and indicators to learn more about how each income group performs within individual areas of food sustainability.

“When people are inserted into an overall food system that is not sustainable, it makes making sustainable choices harder,” Dembska tells IPS. “We want to draw attention to issues that may be well known to those in areas such as public health but might not be as appreciated by policy makers, but who are connected to the relevant sectors—then there can be more of an integrated approach.”

While much of the discussion about food wastage focuses on developed countries, the situation is more complicated.

“In poorer countries there is not so much food waste at the consumption end, rather it’s more a case of food loss at the farming and storage stages, as they don’t have the required infrastructure yet,” Lipinski says. “Rather than singling out countries for blame, it’s more helpful to look at and think about the trend of how as incomes increase as countries develop, the wastage shifts downstream to the consumer end.”

In addition to the educative likes of BCFN’s food sustainability index to shed light on these sorts of trends, other practical measures are gaining traction. Increasingly shops are opening up to selling lower-quality foods, such as fruits and vegetables—sometimes called “ugly” because they do not meet high quality standards such as size, colour and shape but are safe to eat—at reduced prices.

Other initiatives—including social media and other public awareness campaigns—are focusing on providing more information about safe food handling, proper food storage in households and better understanding about “best before” dates in order to prevent and reduce food waste.

Around the world, one in 10 people is estimated to have to choose between spending money on food or healthcare, a conundrum that many Americans face due to mounting living costs.

“In a city like Austin, there is increasing prosperity, but at the same time there are people being left behind,” Angela Henry, from the Central Texas Food Bank, part of Feeding America, a nationwide network of 200 food banks providing hunger relief across the U.S., tells IPS. “There’s a viscous cycle of food insecurity and health disorders—lack of nutritious food leads to stress and makes it difficult to cope and manage your illness, which leads to more complications personally and professionally.”

At the same time, America and many other countries are facing increasing levels of obesity, a major cause of non-communicable diseases such as heart disease, diabetes and respiratory illnesses, which are estimated to cost the world economy two trillion dollars per year (2.8 percent of global GDP).

Despite the overall scale of the challenge, those such as Dembska note that it doesn’t necessarily take drastic actions to achieve eating in a more sustainable way, as all the guidelines are out there already, as illustrated by the “food and environmental pyramid” model.

This highlights the extremely close links between two aspects of every food: its nutritional value and the environmental impact it has through the stages of its production and consumption. Healthier foods that people often don’t eat enough of, such as fruit and vegetables, tend to have lower environmental impact, while foods with a high environmental impact, such a red meat, should be consumed in moderation because of the effects they can have on our health.

“In almost every country of the world, the multiple burdens of malnutrition include caloric deficiencies, micronutrient deficiencies—hidden hunger—overweightness and obesity are putting ever-growing costs on health care systems,” Doerr says. “The majority of wasted foods are perishable, nutrient dense foods like fruits, vegetables, dairy products and fish, which can help tackle all these forms of malnutrition.”

At the same time, another important aspect is to start to look at things differently, says Lipinski. He notes how when people throw away food that has become squishy or mouldy they don’t necessarily look on it as wasting food.

“But you did something, whether it was buying too much food which meant you didn’t eat it in time, or that you forgot about at the back of the fridge,” Lipinski says. “So there are many different points where change can occur.”

As the numbers show, food and the health of ourselves and the planet are deeply connected and impact the financial costs we pay for medical care, as well as potentially deeper costs in terms of a viable future for humanity.

“The main message is that if you want to be sustainable then choose a healthy diet,” Dembska says.