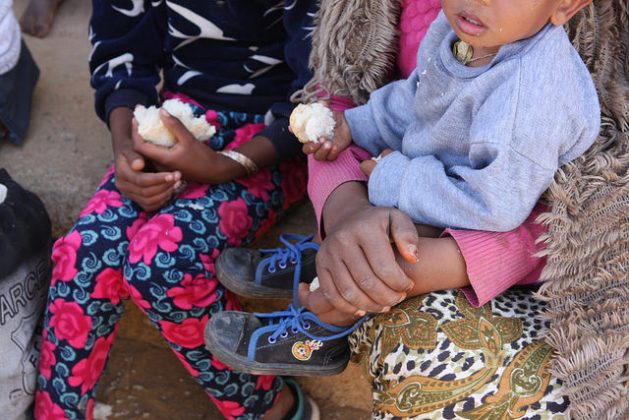 A group of Eritrean men, women and children who have just been dropped off dusty and tired at the entry point in the small town of Adinbried, about 50km southeast of Badme, having crossed the border during the preceding night. Credit: James Jeffrey/IPS

BADME, Ethiopia, Jun 18 2018 (IPS) - The utterly inconsequential-looking Ethiopian border town of Badme is where war broke out in 1998 between Ethiopia and Eritrea, lasting two years and devastating both countries.

Ever since the the town has remained, in spite of its ramshackle, unassuming appearance, an iconic symbol for both countries, primarily because despite the internationally brokered Algiers Peace Accord that followed the 2000 ceasefire, and led to a ruling that Badme return to Eritrea, Ethiopia defiantly stayed put in the town.

“The country [Ethiopia] is undergoing a seismic change—the likes of which it has never seen in such a short time span." --Yves Marie Stranger

Hence Badme festered as a source of rancour during years that turned into decades, with the Ethiopian and Eritrean governments coming to loathe each other, while all along the border the countries remained at loggerheads, each military eyeing the other warily.

But all of a sudden at the start of June, Ethiopia announced its readiness to fully comply and implement the Algiers Peace Accord, one of a number of unprecedented reformist actions this year, and which show no sign of slowing down since the April election of a new prime minister who has pledged to take Ethiopia in a new and more democratic and hopeful direction.

The Ethiopian government also announced it would accept the outcome of a 2002 border commission ruling, which awarded disputed territories collectively known as the Yirga Triangle, at the tip of which sits Badme, to Eritrea.

“Ethiopia’s change of heart towards Eritrea is genuine, and is directly tied to the momentous changes taking place domestically,” Awol Allo, a lecturer in law at Keele University in law and frequent commentator on Ethiopia, wrote in an opinion piece for Al Jazeera. “Ethiopia’s new Prime Minister Abiy Ahmed has reconfigured the Ethiopian political landscape and its strategic direction, moving with incredible speed to drive changes aimed at widening the political space and narrowing the social divisions and antagonisms within the country.”

This has included the prime minister linking the political, social and economic transformation in Ethiopia to regional dynamics, especially Eritrea, with which Ethiopia once had particular close economic, cultural and social ties—Eritrea was part of Ethiopia until gaining independence in 1991.

“Every Ethiopian should realise that it is expected of us to be a responsible government that ensures stability in our region, one that takes the initiative to connect the brotherly peoples of both countries and expands trains, buses, and economic ties between Asmara [the Eritrean capital] and Addis Ababa,” Abiy announced.

The rift between Eritrea and Ethiopia has had significant regional fallout. Both countries have engaged in hostile activities against each other, including proxy wars in the likes of neighbouring Somalia, thereby destabilising an already volatile region. 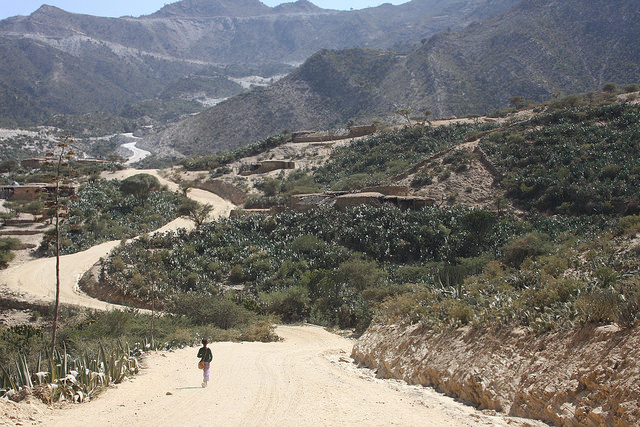 As a result, life became increasingly miserable for Eritreans—hence the unending exodus of Eritrean refugees into Ethiopia—as their government used the border war with Ethiopia and the subsequent perceived existential threats and belligerencies against Eritrea as an excuse for the state becoming increasingly repressive and militarised, with its leader Isaias Afewerki tightening his ironclad rule.

But the Eritrean government’s narrative has had the rug pulled out from under it.

“The Eritrean regime seems confused, unprepared and clueless about how it should respond to Ethiopia’s peace offer,” Abraham Zere, executive director of PEN Eritrea, part of a global network of writers in over 100 countries across the globe who campaign to promote literature and defend freedom of expression, wrote in another Al Jazeera opinion piece. “Ethiopia’s call for normalization and peace puts President Afewerki in a very difficult position, as it undermines his current strategy of blaming Ethiopia for his repressive rule.”

So far the response from the Eritrean government has been conspicuous by its absence. Eritrea’s Information Minister Yemane Gebremeskel when pressed to comment on the issue on Twitter replied elliptically: “Our position is crystal clear and has been so for 16 years.”

Previously, the Eritrean government has consistently demanded full compliance by Ethiopia with the EEBC’s decision and unilateral withdrawal of all troops from the disputed territories before any chance of normalizing relations—a demand that fails to take account of the EEBC’s terms and the  complex situation on the ground.

“The insistence on unilateral withdrawal as a condition for normalising relations is not tenable, not least because Badme was under Ethiopia rule before the EEBC’s ruling and continues to be under the effective control of the Ethiopian government,” Awol says. “The two countries must come together in good faith to hammer out a number of details including the fate of the population there.”

It’s unlikely to be easy. Already in Badme and in other of the disputed territories, both Eritreans and Ethiopians are protesting Abiy’s decision to implement the commission’s arbitrarily drawn border that would divide communities between the two countries.

“We have no issues over reconciling with our Eritrean brothers. But we will not leave Badme,” Teklit Girmay, a local government official, told Reuters. “We do not want peace by giving away this land after all the sacrifice.” 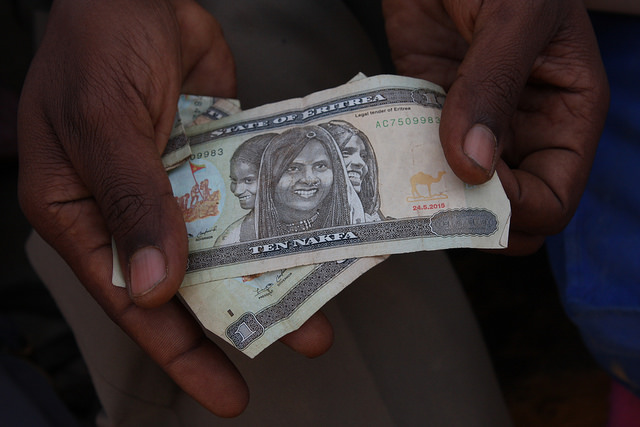 “It took us four days traveling from Asmara,” a 31-year-man said of the trek from the Eritrean capital, about 80km north of the border, holding all the money he has left: 13 Eritrean nakfa (80 cents). “We travelled for 10 hours each night, sleeping in the desert during the day.” Credit: James Jeffrey/IPS

Furthermore, across Tigray, Ethiopia’s most northern region that straddles the border, there are reports of increasing anger and protests about the announcement, while the Tigrayan People’s Liberation Front regional party that has dominated Ethiopian politics since its founders spearheaded the 1991 revolution that brought the current government to power has issued a veiled warning to Abiy.

“The Tigrayan People’s Liberation Front will not take part in any process that harms the interests of the people of Tigray,” it said in a statement, demanding that any withdrawal be linked to additional concessions from Eritrea.

Tigray’s proximity to Eritrea and the previous war means its people are acutely sensitive to the potential ramifications, which is further complicated by how people on both sides of the border share the same language – Tigrinya – as well as Orthodox religion and cultural traditions: a closeness that can also heighten resentment.

In 1998 Eritrea invaded Badme before pushing south to occupy the rest of Ethiopia’s Yirga Triangle, claiming it was historically Eritrean land. Ethiopia eventually regained the land but the fighting cost both countries thousands of lives and billions of dollars desperately needed elsewhere in such poor and financially strapped countries.

At the time of the EEBC’s ruling on Badme, the Ethiopian government felt the Ethiopian public wouldn’t tolerate the concession of a now iconic town responsible for so many lost Ethiopian lives—hence it and the rest of the Yirga Triangle remained jutting defiantly into Eritrea, both figuratively and literally.

“Although Badme was a mere pretext to start a conflict fuelled by much deeper political problems, it has since been etched into the imagination of many Ethiopians and Eritreans and has taken on a deeper meaning,” Awol says. “The name Badme condenses within itself a series of fundamental political and economic anxieties and hegemonic aspirations, acting as a byword for brutality, anguish, guilt, shame, fear and pride.”

In addition to potential internal resistance from the Ethiopian government’s TPLF old guard, coupled with potential intransigence from the Asmara regime, the reaction of the international community could also play a significant role.

Ethiopia is at a potentially exciting crossroads—though nothing is assured, and may well hang in the balance, one that the international community can influence due to Ethiopia’s increasing integration in the global system.

“The country is undergoing a seismic change—the likes of which it has never seen in such a short time span,” says Yves Marie Stranger, editor of “Ethiopia: Through Writers’ Eyes,” and a long-time Ethiophile. “Ethiopia, a land of barter and subsistence farming, a land where very little money changed hands until recently,  now depends on world oil prices,  wheat imports and  the dollar rate—just as much as on the next rainy season. In other words, Ethiopia’s unorthodox economics must now worship in the global church.”

Depending on what happens next, the repercussions for Ethiopia and Eritrea, and the wider Horn of Africa region, could be enormous.

“If Ethiopia does follow through with its stated intention, it’s doubtful that Eritreans would accept any further fear mongering from the Aferwerki administration regarding Addis Ababa’s actions and intentions,” Abraham says. “If Aferwerki attempts to dismiss or undermine this long-awaited gesture from its neighbour, the population may openly turn against the regime.”