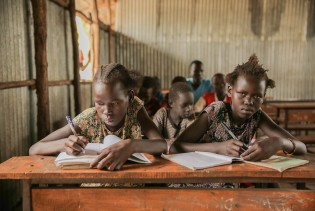 By Alison Kentish
Already reeling from conflict, extreme weather events and growing displacement due to the COVID-19 pandemic, escalating tensions in Ethiopia’s Tigray region have placed the country on the brink of civil war and many are looking to Nobel Peace Prize-winning Prime Minister Abiy Ahmed to avert a potential humanitarian disaster.

By James Jeffrey
On a Saturday afternoon in one of Addis Ababa’s khat houses, a group of men and women chew the mildly narcotic plant while gazing mesmerized toward a television featuring a South Korean soldier stripped to his waist and holding a young lady’s hand while proclaiming his undying love—somewhat incongruously—in Amharic.
Next Page »
ADVERTISEMENT ADVERTISEMENT