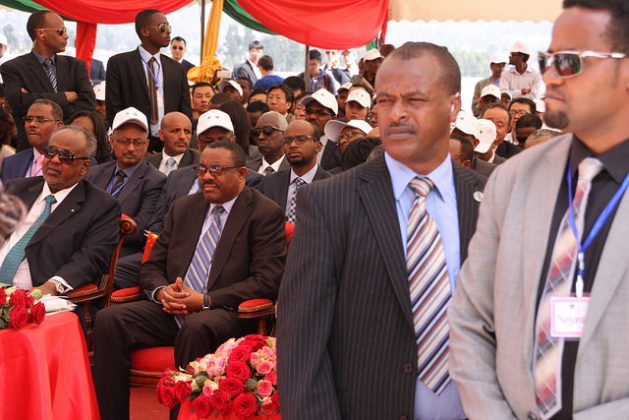 ADDIS ABABA, Mar 9 2018 (IPS) - The dominoes keep falling in Ethiopia, with one of the most significant crashing down.

Just over a month after the Ethiopian government’s surprise decision early January to close a notorious prison and release political prisoners, Prime Minister Hailemariam Desalegn announced on Feb. 15 his shock resignation in another apparent bid to placate the turmoil that’s plagued the country for more than two years.

“It is time for Ethiopians to decide whether they want the former empire that is Ethiopia to be one country or several countries.” --Sandy Wade, a former EU diplomat

He was the first ruler in modern Ethiopian history to step down—previous leaders having been overthrown or dying in office. The day after the announcement, another state of emergency was declared in Ethiopia—a preceding 10-month state of emergency, the first in 25 years, having ended in August 2017—casting further uncertainly over the second most populous country in Africa with one of the continent’s fastest growing economics, a staunch ally of the West in the fight against terrorism, and a country that has previously managed to hold out as a relative oasis of stability in the Horn of Africa as countries around it have descended into anarchy.

“There is no guarantee that Ethiopia will not descend into further chaos and violence,” says Awol Allo, an Ethiopian lecturer in law at Keele University in the UK and media commentator on the protests. “There is no magic formula here that doesn’t exist in other African countries. After all, we share a large measure of cultural and institutional similarities.”

Some have seen Hailemariam’s resignation as a desperate act of self-preservation by a tiny Tigrayan ethnic elite accused of using Hailemariam to continue and entrench since the end of the country’s civil war in 1991 the domination of its Tigrayan People’s Liberation Front (TPLF) within the ruling Ethiopia People’s Revolutionary Democratic Front (EPRDF) four-party coalition, and thereby over Ethiopia itself. Others, however, say this misses the point about the scale of change forced on Ethiopia’s political space.

“The resignation of the prime minister was not in the interest of the TPLF,” Awol says. “While TPLF is still trying to arrive at a resolution that will continue to preserve its undeserved influence, the resignation is an outcome of the relentless protests of the last two years.”

Having succeeded Ethiopia’s long-term and charismatic ruler Meles Zenawi who died in 2012, Hailemariam never managed to shake off accusations of being a caretaker figure without real power; there to implement the orders of more influential figures in the army and in the TPLF.

A more sympathetic analysis is that Hailemariam, a proclaimed and committed Christian, was always surrounded by a viper’s nest of a government and was increasingly caught between a rock and a hard place.

Concessions he has made have emboldened protesters, while hardliners in the party have bristled at the speed and scale of such concessions. On top of which, as the protests have continued, the EPRDF has become increasingly riven by divisions as its Oromo and Amhara wings have fought back against the Tigrayan over-lordship.

Rumors were circulating widely that he would resign after the party congress scheduled for this month. Some observers say the early resignation was brought forward because the ruling party wants a more assertive person in charge during a time of crisis when the Ethiopian equation that underpinned previous decades of stability is proving increasingly hard for the government to square.

Ethiopia has aped the Chinese developmental state model of providing its populace with material gains to offset curtailments of civil liberties. But after a decade of double-digit growth, based largely on state investment in infrastructure, growth in Ethiopia has slowed in recent years amid severe droughts and social unrest. Furthermore, even during that growth most Ethiopians felt entirely excluded from material benefits that they could see being relished by only a small minority, the disparity made even more galling by the all-pervading restrictions on basic freedoms compounded by economic pressures such as rising prices and stagnant wages.

That bundle of iniquities finally came to a heard with the Oromo protest movement erupting at the end of 2015. Having not lost steam during a repressive crackdown when no concessions were made, it seems even less likely to stall now, while its future course could have existential implications for Ethiopia as a nation state.

“It is time for Ethiopians to decide whether they want the former empire that is Ethiopia to be one country or several countries,” says Sandy Wade, a former European Union diplomat in Addis Ababa during the protests.  “If they want one country the current obsession with ethnic nationalism needs to change because it will lead to several countries not one.”

That said, some in Ethiopia note there’s a limit to what protesters will endure, added to which Ethiopia’s security and military apparatus remains potently capable. Hence all eyes are on who will succeed Hailemariam—March 11 has been set as the date on which deliberations to choose a successor will begin—and whether the new prime minister will continue to pursue rapprochement with disaffected segments of society or initiate a crackdown.

“If TPLF implemented reforms as it said it would and EPRDF elected a leader from the restive region of Oromia, the nerve center of the protests and activism, things would have changed for the better,” Awol says. “The current situation suggests that things will continue to unravel.”

Who such unraveling might benefit, if anyone, is hard to say, but the opposition certainly feel that the wind is in their sail.

“Stopping the protest is impossible now,” says Jawar Mohammed, a prominent US-based Oromo opposition activist commanding a huge social media following, and a hero to some and villain to others. “It is possible to prevent them further intensifying and over-running the regime by taking bold concrete action very, very quickly that should include appointing a capable, popular prime minister with proven reformist credential.”

But Ethiopia has a long history of being led by authoritarian strongmen figures—before Meles Zenawi it was the military dictator Mengistu Haile Mariam and before him Emperor Haile Selassie, continuing back to the 19th century and Emperor Tewodros who began building the empire that became modern Ethiopia.

If the EPRDF chooses a figure from its old guard rather than a rising politician with greater public support, it’s feared this will lead to more, perhaps worse, unrest. But whoever is chosen, even if acceptable to the protesters, will be faced with a gargantuan task.

“Once appointed the new prime minister should quickly hit the ground [running] making it clear he would lead the country to transition, meet with opposition, begin charting a roadmap for transition,” Jawar says.

This must include, Jawar and others note, rapidly liberalizing the political sphere so that opposition groups and the media can build their capacity to play a role in building durable democracy, the establishment of the latter being ultimately, most commentators highlight, what will put an end to the protests.

“Unless you have a coherent organized roadmap that would fit into the power vacuum that you create, if you are lucky you end up with a dictatorship, or if you are unlucky you just open up a Pandora’s Box of chaos,” says Abebe Hailu, a human rights lawyer in Addis Ababa, who lived through the emperor’s fall and the following communist dictatorship. “In my life I have seen that worse things can happen than what you think.”

Ethiopia has always viewed itself as different to, even separate from, the rest of Africa. But there remains enough concern it could repeat the same mistakes and disasters seen too many times on the continent, or that so deep runs vitriol and resentment among the competing elements that emotions will fuel actions that prove self-defeating for everyone.

The influences of key donors and international partners such as the US, UK and European Union could have an impact, although previously international diplomacy has long appeared to specialise in tip-toing around the Ethiopian government for fear of upsetting it, and, beyond releasing somewhat admonishing embassy press releases, has appeared unwilling to bring much of tangible persuasive effect to bear. The impact of the heavily influential Ethiopian diaspora opposition, especially in the US, could well swing matters, proving far more decisive, harbouring the potential to call for compromise or further stoke tensions.

“The possibility of real inter-ethnic problems, based probably on jealousy, is there,” Wade says. “Some people are undoubtedly going to die in low level ethnic clashes encouraged by irresponsible, and probably criminal, people who are acting only out of self-interest.”