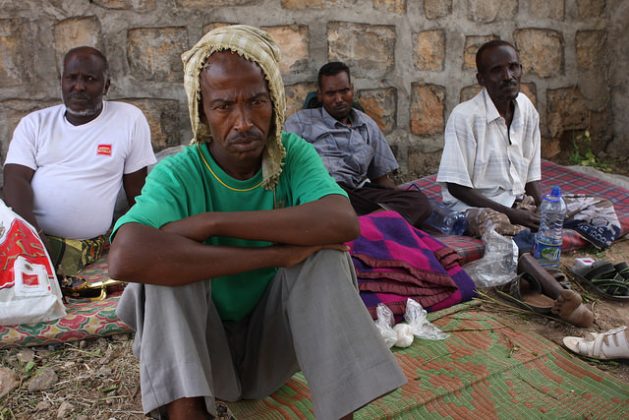 NEAR THE OROMIA-SOMALI REGIONAL BORDER, Ethiopia, Nov 21 2017 (IPS) - Ethnic animosity unleashed in Ethiopia has displaced hundreds of thousands as well as rendering all manner of usually sacrosanct loyalties obsolete.

“I was making my husband dinner in the evening but an hour after he returned from work he kicked me out of our home,” says Zahala Shekabde, a Somali married to an Oromo. “I pleaded with him, told him I loved him and that I have nothing else, but he said he didn’t want to listen and I must go otherwise he would hurt me.”

Both regional governments deny their special police were involved while accusing the other of Machiavellian plots.

She left with nothing other than three children from a former marriage—her husband wouldn’t let her take her youngest child from their marriage.

Other displaced ethnic Somali with Zahala from all over Ethiopia’s Oromia region say there was no warning and explanation given for their evictions, other than the local Oromo where they lived, including local officials, telling them it was revenge for what had happened to Oromo in Jijiga, the capital of the Somali region.

Upwards of 50,000 ethnic Oromo had to leave the Somali region and beyond (officials from the opposing Oromia and Somali regions dispute whether the sum applies just to the Somali region or to the Horn of Africa—Oromo have also left Djibouti and Somaliland, where two Ethiopians were reportedly killed in the capital, Hargeisa).

This sequence of tit-for-tat ethnic-based violence and evictions was sparked after Oromo protests on Sept. 12 in the town of Aweday, between  the cities of Harar and Dire Dawa near the border between the two regions, led to rioting that left 18 dead, according to official figures, the majority being Somali traders of khat, the plant that when chewed acts as a mild stimulant. Somali who fled Aweday say it was closer to 40 killed.

Following Aweday, the Somali regional government began evicting Oromo from Jijiga and the region. Officials say this was for the Oromo’s own safety, and that not one Oromo died from ethnic violence in the region—a fact disputed by displaced Oromo.

“My husband was sick at home when I left for work on Sept. 20,” says Fateer Shafee from a village near Jijiga. “Later I got a call from him saying to come and collect the children as there was conflict nearby. When I got back I found the children but our home was burnt with my husband still inside. Everyone was running and hadn’t been able to get him out.” 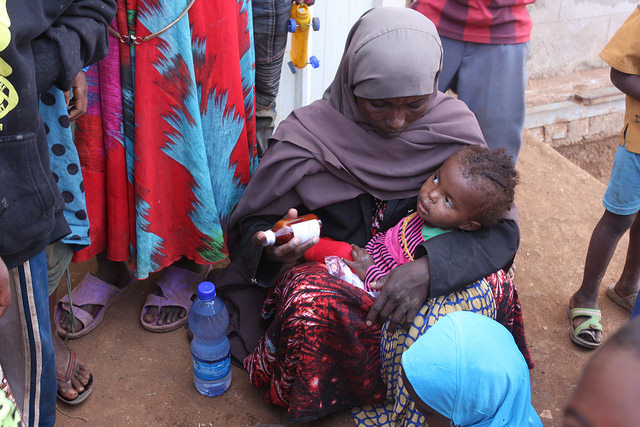 In the numerous camps that have popped up and public buildings commandeered to absorb the displaced, Oromo and Somali tell equally convincing stories of ethnic violence, primarily carried out, they claim, by each region’s special police, while exhibiting even more convincing physical wounds of that violence.

Meanwhile, both regional governments deny their special police were involved while accusing the other of Machiavellian plots. At the federal level, the government faces accusations ranging from not doing enough to turning a blind eye to even abetting violence for political ends. Another option is it may simply not have the capacity to do enough, so widespread is the violence.

“It’s very difficult to tell if there have been acts of omission or commission at all levels,” says the head of one international humanitarian organization in Ethiopia, who spoke on condition of anonymity.

The scale of what’s happened becomes clearer 80km east of Dire Dawa, just over the regional border in the Somali Region, where two giant camps for displaced Somalis are co-located in the lee of the Kolechi Mountains.

In the older camp are 5,300 Somali households—household size varies from 6 to 10 people—displaced by a mixture of drought and ethnic violence since 2015. In the newer camp are 3,850 households displaced by the recent violence.

“It’s uniformed police carrying out the bloodshed,” says one Somali man at the camps.

Another man had to flee Oromia’s Bale zone, hundreds of kilometers to the southwest, though he says that 500 Somali households remain there under constant harassment.

“They are rich farmers and are attacked each day,” he says. “The local Oromo tell the Ethiopian soldiers there one thing and then do another—it’s the worst example of conflict as the farmers are totally isolated and surrounded, and have no way of getting away.” 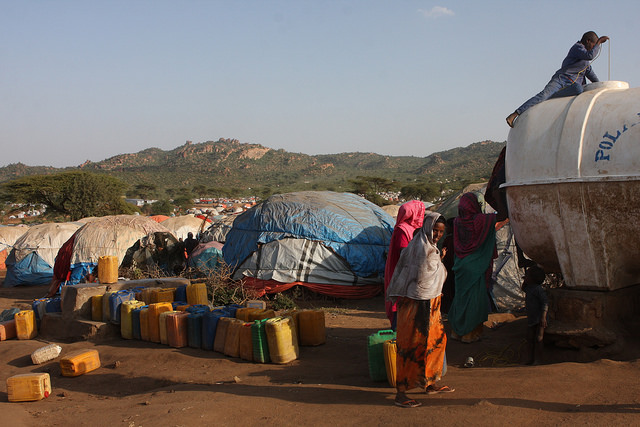 Inhabitants in both camps pull back clothing to reveal old bullet wounds, scars and lesions from burns, broken bones that never healed, and more.

A number of displaced Somali say they survived thanks to the intervention of soldiers from the national Ethiopian Defense Force. But it wasn’t enough to allow them to remain, or to return.

“If the federal government sends forces to keep the peace they stay for a week or a month and then after they leave it happens again,” says one Somali man. “We can’t risk staying.”

Oromia and Somali are the two largest regions in the country by area size, sharing a border of more than 1,400 km (870 miles). The Oromo constitute the largest proportion of Ethiopia’s population, numbering about 35 million, a factor Ethiopia’s other ethnic groups remain deeply conscious of—especially its 6.5 million Somalis.

Ethnic conflict along the border between the two regions and in the regional rural hinterlands has long occurred, and can be traced to grievances and still standing tensions from the Ethio-Somali war of the 1970s and further back to historical tensions over Oromo migration due to their significant numbers.

But ethnic violence in urban areas well removed from the border is particularly rare. Many say the violence is all the more shocking within communities that integrated peacefully for centuries, and within which intermarriage between Oromo and Somali was the norm.

In 2004, a referendum to decide the fate of more than 420 kebeles around the border—Ethiopia’s smallest administrative unit—gave 80 percent of them to the Oromia Region. This led to thousands of Somalis leaving areas for fear of repercussions.

The referendum still hasn’t been fully resolved, which some say could be one factor behind the current conflict, as may be the on-going drought putting further pressure on pasture and resources—but only to a degree.

“There’s been drought before and no violence happened,” says the vice administrator of one of the Somali regional zones badly hit by the drought. “The main reason is politics and is hidden—this is all man-made.”

Ethiopia’s ethnic federalist system devolves power to regional states. Some observers note how this leaves the government in a quandary of respecting that devolution while also protecting the constitutional rights of Ethiopians, especially minorities, as regions increasingly flex their devolved muscles.

Recent trouble primarily occurred where notable minorities existed: Somali in Aweday, for example, and Oromo in Jijiga. More diverse cities such as Dire Dawa, with a less clear majority, have escaped violence for now.

Meanwhile, accusations go beyond political machinations by regional powerbrokers and the federal government to include the Ethiopian diaspora opposition and social media.

“The Oromo are being directed from Minnesota in America,” says one Somali official. “The Oromo in government don’t have enough respect or influence to coordinate this.”